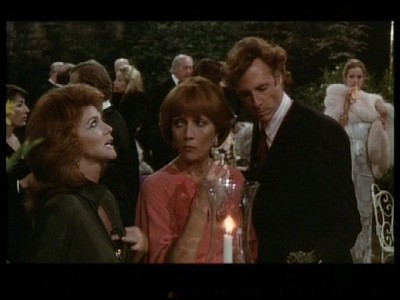 Anyone who has an interest in the various non-U.S. national cinemas will be familiar with the depressing problem that seems to lie at the heart of the failure of Claude Chabrol's 1976 film The Twist (Les Folies bourgeoises). It is the same problem that Bergman had when making The Serpent's Egg, or Truffaut when making Fahrenheit 451--the same drawback Sydney Lumet observed in his book Making Movies when commenting on his difficulties with Antonioni's Zabriskie Point: they are all international co-productions by European directors who have created masterpieces in their native tongues but have never made films in English, but, faced with the demands of the marketplace and international casting, they were obliged to make those particular films in English. The results are varied, but the stilted quality of the characters' speech and actions (with dialogue sometimes dubbed in for actors who do not speak English) in those films, and the obvious reason for it (the director who has compromised and taken their distant-second choice on the language front in order to get their film cast and financed), is too intrusive to ignore. And all of those examples look wonderful compared to The Twist, because they at least had some perceptible structure or vision, however short they may have fallen in some respects. In Chabrol's film, even on top of the omnipresent irritation of being asked to accept a France where everyone speaks (unconvincing) English with different accents, this film has exactly the wrong confluence of other factors (tone, performance, music), and what might have seemed like a fanciful, larkish foray into internationally-cast, English-speaking film turns out to be virtually unwatchable.

The Twist's story, such as it is, involves an American writer, William Brandels (Bruce Dern) and his French wife, Claire (Stéphane Audran), who live unhappily together in France. William confronts writer's block and artistic failure, and Claire copes with her paranoid jealousy and insecurity about aging. Her insouciant, liberated, much younger niece Nathalie (Sydne Rome) is a threat, as is William's Italian translator, Charlie (Ann-Margret), with whom he is actually cheating on her. She develops increasingly desperate, elaborate plans to get William back, or get back at him: an affair with William's editor, Jacques (Jean-Pierre Cassel), or a sudden move of their household from Paris to a country castle. Each spouse has nightmare fantasy sequences (interspersed arbitrarily and frequently, and garishly overlit just in case we were unable to get it) involving the other and their vividly imagined infidelities. 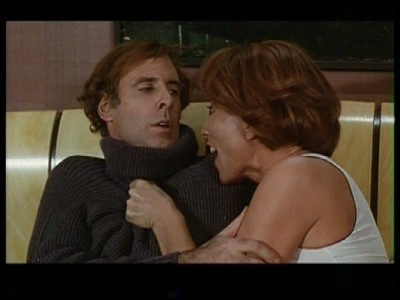 Right in the midst of all this, the film seems to just end randomly after meandering along interminably, as if the director and characters got fed up and weary and decided to stop. Now, there are "loose" and "elliptical," which can be compliments when applied to the right work, and then there's something like The Twist; the usually precise, methodical, composed Chabrol is not Robert Altman by any stretch, and The Twist, which takes him impossibly far outside his comfort zone, reaches a stopping point more than an ending, with the implication that things will just go on as unpleasantly as they have throughout. In any case, by that time we are just glad to be able to get off this doomed ship of a movie.

I would not recommend anyone subjecting themselves to Chabrol's disappointing, incoherent mishmash, but that would be the only way to really understand how poorly put together it is, as it is actually difficult to describe The Twist's floundering, flailing shapelessness, which seems to warp time out to an unbelievable slowness as you watch the scenes go pointlessly and interminably on, arriving nowhere. The characters are not really characters, but collections of mannerisms and behaviors that are ridiculously exaggerated and quite poorly played; Audran hams it up embarrassingly as the inexplicably hysterical Claire, and Dern is simply unbearable, shouting his way through scenes, noticeably flubbing lines and generally doing his fifth-rate Jack Nicholson imitation. The actors often seem to be playing different people (all of them insane, overdemonstrative drama queens) from one shrill, manic, overacted scene to the next; I suppose it's fortunate that the fantasy sequences are filmed too-bright as a marker, because the "real" scenes seem just as forced, formless, and unfunny as the daydreams.

It is actually difficult to get a sense of the intended tone of any of this, but there are some clues pointing to the idea of a light, droll, very fanciful and whimsical farce on bourgeois marriage--an idea that is failed by every detail of the execution. We are all familiar with the special rancidness of failed whimsy (see any of Terry Gilliam's less artistically successful films), and The Twist positively reeks of it. Sympathetic viewers who admire Chabrol for his very worthy body of work will find themselves tuning out of The Twist and wondering how a director and actors who have demonstrated such genuine intelligence and talent elsewhere could have dealt with the day-to-day experience of working on something so dismal. What could that have felt like? Surely, they must have known? All of which is to say that the film of the disastrous, humiliating making of The Twist would be a million times more interesting than the film itself. Chabrol himself freely admitted that this was his worst picture, and few will be able to find any reason to contradict that assessment. 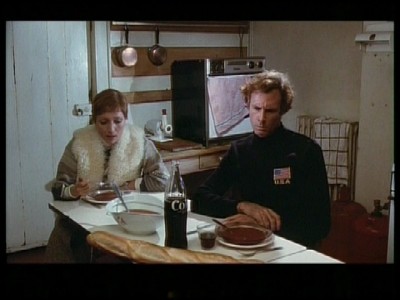 
The film is so poor that it ultimately does not make that much of a difference, but the transfer of The Twist is execrable--non-anamorphic and rife with reel change markings and other debris, scratches, and flaws that even a basic clean-up could have ameliorated. There are occasional visual markings that suggest the tracking of a VCR, and one wonders whether Pathfinder Pictures actually had the gall to dump a crummy videotaped edition of the film onto a DVD in the cynical hope of luring in hapless Claude Chabrol fans.


The monaural audio is clear enough, but the sound suffers from the same apparent problem as the video: it is muffled and either too soft or too loud in a way that suggests more the inferior sound quality of a VHS tape than the fuller audio that the DVD format offers as a bare minimum when the producer of the disc is even the least bit conscientious.


This is a very bad film--not "so bad it's good" or sweetly inept but really, abysmally failed--that has been very badly transferred onto DVD, to boot. The only benefit of this release of The Twist is that Claude Chabrol completists who cannot live without personally experiencing each of his films will finally have the opportunity to confirm their worst suspicions (and Chabrol's own negative assessment of the movie) for themselves. Otherwise, do yourself a favor and Skip It.