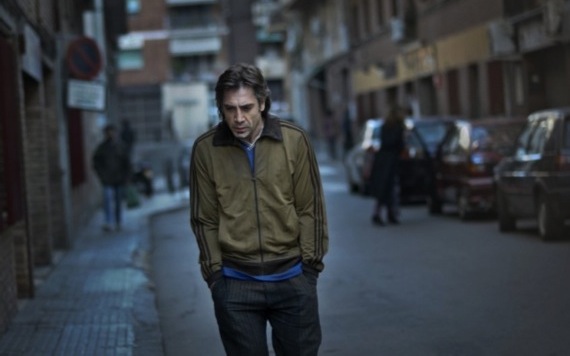 I walked out of Biutiful, so
take this review with an appropriate measure of skepticism. I haven't
walked out of a movie in years, but Biutiful

seemed to be daring me to leave within its first twenty minutes. Despite
an arresting pair of opening moments, Biutiful
devolves into a sluggish, meandering, dour assemblage of scenes that
are utterly - shockingly - without momentum. At two-and-a-half hours,
Biutiful is not the longest of movies, but after nearly half of
that length, I felt like I'd spent a whole day in the theater without
getting anywhere. I could not stand to spend another minute in the presence
of co-writer and director Alejandro González Iñárritu's dire worldview
and Javier Bardem's tragic, self-hating face (a good performance though
it is).

Biutiful is packed with characters, incident, and plot, but part
of the film's problem is a lack of emphasis. Every scene, every interaction
between characters, and every complication of the plot has the same
relative value. The movie never feels like its moving anywhere. We appreciate
that Bardem's character, Uxbal, is a dying man with a disordered life
that includes an estranged wife, two young children, and a career split
between petty black market crime and serving as a medium, relaying messages
between the recently dead and their loved ones. As his own death nears,
Uxbal is driven to set some of the many wrong things in his life right.


Despite walking out, I cannot say that Biutiful
approaches true "badness." It just offers little to the viewer
in terms of a connection to the proceedings unfolding on-screen. We
are positioned as voyeurs, taking a casually-observed tour of one man's
sloppy, unhappy life. But there's no voyeuristic thrill in Biutiful,
nor is there sense that the things we are spying on have been judiciously
selected for maximized impact. Instead, everything is lumped together,
from the most mundane to the most significant. Every scene has the same
relative dramatic weight, which is the same as saying that they have
none at all.

Bardem gives a performance of unfathomable depth. His engagement with
the material displays nothing less than a complete dedication to his
character. But his efforts are betrayed by Iñárritu's bizarre insistence
that each scene be structured and paced with an exacting sameness; even
the screen time of each scene seems to be the same. There is no pacing.
Although the photography is technically and aesthetically accomplished,
the look of the film also suffers from stagnancy. After a few scenes,
the film ceases being visually dynamic, neither from photographic nor
editorial standpoints.


Although the filmmaker's outlook is dour, that's not what made me realize
there were better ways to spend a Sunday. It was the film's glacial
pace and a complete lack of storytelling mojo. It wasn't the kind of
story that Biutiful tells, it was the extraordinarily tiresome
way it chose to tell it.