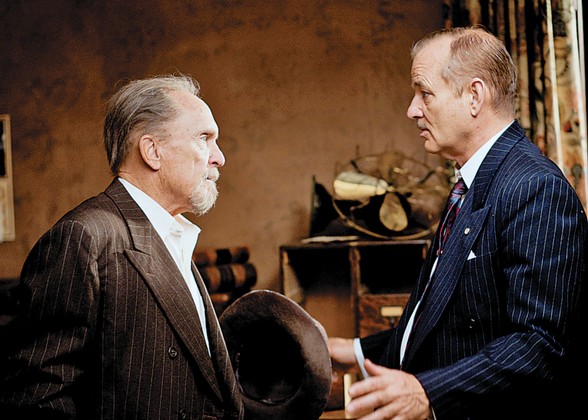 Robert Duvall has been playing spirited old men for more than twenty years, and now pushing eighty, Duvall has found what might be the best of these roles in Felix Bush, the protagonist of Aaron Schneider's directorial debut, Get Low. Throughout his varied career as an actor and filmmaker, Duvall has established himself as a prolific, professional, committed, and always compelling presence, performing in a strong mixture of big-budget Hollywood movies and tiny independent films - although his contributions to smaller films usually guarantee an automatic enlargement of sorts. Whatever the project's scale, Duvall can be depended upon to provide some combination of down-to-earth sincerity, genuine heart, and, occasionally, an unpredictable ferocity. Get Low is a showcase for Duvall, and the character of Felix Bush is layered in way that allows the actor to explore an uncommonly broad portion of his range.

Get Low opens with Felix Bush chasing children off his property - a grizzled, bearded, ancient old coot living out in the middle of nowhere in a tiny cabin with a small adjacent barn. It's the early 1930s, or thereabouts, and the surrounding town has buzzed with rumors about Felix for several decades - that he's a killer and a beast, and who knows what else. One day, Felix makes his way into town for a meeting with the undertaker, Frank Quinn (Bill Murray) and his associate Buddy Robinson (Lucas Black), and requests that they "make him a funeral party" - at which Felix himself plans to be present. The idea is that all the townsfolk - in fact, all the residents of the nearest four or five counties - will be invited to attend and tell a story about Felix. For this service, Bush promises Quinn a healthy sum. And, to promote the event, Felix offers the bequest of his land, to be awarded by lottery at the "funeral."

The plot turns mostly on Felix's motivations for hosting this bizarre event, which have to do with the reason he's been hiding out in the woods by himself for four decades. When an old flame returns to town (played by Sissy Spacek), things become more complicated.

Get Low is anchored by its uniformly outstanding cast, starting with the powerhouse performance by Duvall in the lead. His Felix is a mysterious, withdrawn manipulator who is also likable, temperamental, and masochistic. Duvall tackles the job with great energy, applying his enormous talent to a role that dominates the picture without a whole lot of dialogue - Bush is a man who uses exactly as many words as he needs to and never repeats himself. Duvall conveys this through an aged confidence and his usual mannerisms: licking his lips, pressing on his chest with his hands, and making bizarre wind-like noises - all of which continue to work wonderfully.

But Duvall's is hardly the lone performance of interest. As Quinn, Murray is perfectly cast. Quinn is a failed salesman from Chicago, who has recently remade himself as an undertaker in this small Southern town. He drinks, dresses flashily, and sports a pencil moustache - all of which contribute to his fish-out-water demeanor. Murray invests Quinn with an urban opportunism that is slowly but surely foiled by Felix's odd combination of decency and determination. As always, Murray is appealing and funny as this would-be shyster who finds himself baffled into honesty. Quinn's assistant, Buddy, is played by Lucas Black as a conservative, earnest young man in whom grows a real affection for the oddball Bush. And the formidable Sissy Spacek is affecting as Felix's one-time lover, who finds herself jilted all over again under a new set of circumstances.

Seasoned cinematographer Aaron Schneider brings a sensitive eye to his directorial debut, which is photographed beautifully by David Boyd. There is a point in the last third of the film where the storytelling becomes confused - almost beyond repair. The solid script by Chris Provenzano and C. Gaby Mitchell is patient, allowing its characters to evolve and change in interesting, subtle ways - and in this respect, the script is a gift to the film's actors. But in its last third, some strange, seemingly arbitrary things occur that are without precedent - and the film's resolution, while generally sound, is pushed a little off-balance by this handful of scenes. In the interest of avoiding spoilers, I will just say that Bush says and does a couple of things that I felt were out of character, and his motivations begin to feel less consistent than they were up to that point. I also have a couple of reservations about the actual funeral sequence, which, despite its prolonged set-up, doesn't include a single "tall tale" from party guests.

The widescreen 2.35:1 transfer is a detailed, rivetingly clear job by Sony, capturing the film's polished visuals effortlessly. A good amount film grain is present, which is particularly important given Get Low's antique look. The 5.1 soundtrack is very atmospheric and immersive; while the film's environment isn't an outlandish or terribly unusual one, the filmmakers have taken great care with the sound design, which bears detailed attention to its broad dynamic range.

Despite the trend toward dwindling bonus content on DVD releases, Sony offers up a nice selection of extras. First off is a commentary track featuring director Schneider, leads Duvall and Spacek, and producer Dean Zanuck. It's a spirited talk, with the participants all in one room together. Next up are a few featurettes: The Deep South: Buried Secrets (7:41), Getting Low: Getting into Character (9:31), and A Screenwriter's Point of View (5:08) cover the film's background and production with insights from most of the movie's key players. The Cast and Crew Q&A (9:27) comes from the Tribeca Film Festival, and One the Red Carpet (4:24) appears to contain footage from an AFI screening. The film's original Theatrical Trailer wraps up the bonuses.

Among other things, Get Low comprises a wonderful group of performances by a dream cast. Surprisingly, none of the leads were in the running for any of 2010's major awards. The film rests on the solid foundation of its fascinating, funny, mysterious characters, and is lovingly shot and edited by first-timer Aaron Schneider. Recommended.