Either Mitch Glazer is a filmmaker of extraordinary depth and emotional perception, or the man's a lunatic who should never be allowed to direct again. "Passion Play" makes a strong case for the end of Glazer's moviemaking career, submitting an overwrought, sublimely goofy story about angels, jazz musicians, and gangsters, treating unbearably silly material with a furrowed brow concentration one might expect from a Shakespeare adaptation. There's undeniable entertainment value in accidental absurdity, but "Passion Play" strikes a note of delirium that's downright painful to process.

Escaping an attempt on his life in the wilds of Canada after messing around with the wife of pitiless gangster Happy (Bill Murray), jazz trumpeter Nate (Mickey Rourke) finds himself hunting for safety, stumbling upon a carnival sideshow. Inside, Nate encounters Lily (Megan Fox), a "bird woman" with real wings; a creature the exasperated musician assumes is an angel. Looking to protect her from harm, Nate runs off with Lily, hoping to entice Happy with a private showing of her feathered miracle as a way to settle their differences. Instead, Happy steals Lily for his own amusement, leaving Nate destroyed, facing a cruel world without the comfort of his winged lover. 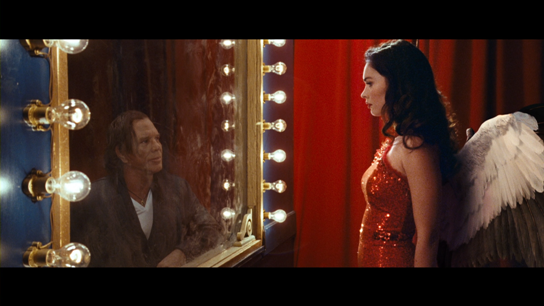 "Passion Play" is an incomprehensible mess of a movie, though it's strangely ambitious, featuring Glazer madly shoveling away the incoming concrete pour of arch dismissal while trying to communicate a wildly bizarre, highly symbolic story. I couldn't scrape any sense off the film, yet Glazer seems to think there's exceptional depth here, ruminating on moments of isolation and exploitation, hoping to impart a great cinematic power in the image of Fox with extended wings, offering a heavenly vulnerability that renders all men powerless. I'm confident Glazer knows exactly what this movie is about. It's a crime he fails to pass along the dramatic basics to his hungry audience.

Cashing in favors and roping wife Kelly Lynch (here as Nate's concerned stripper pal) into this mix, Glazer assembles a colorful ensemble that has the unfortunate task of selling the story without breaking down into hysterics. Bless these half-interested actors, who genuinely attempt to catch the wild pitches of dialogue and blustery emotions Glazer is launching, struggling to make constant oddity their own, which often results in teary displays of frustration -- quivery, weepy moments that don't always feel like acting. 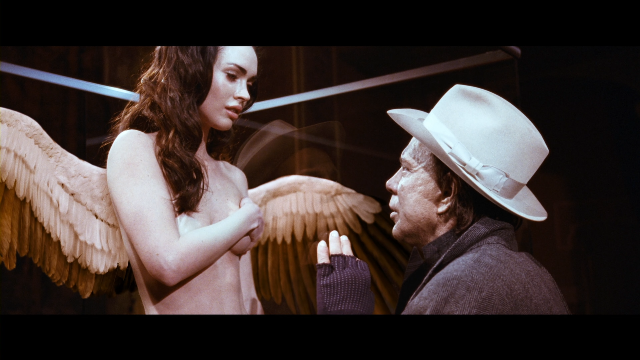 Fox is suitably dewy as the bird woman of fate, often shown half-naked and upset, selling her CG wings to the best of her ability. Murray is barely awake, called in to fill a few scenes with some low-key menace, spending more time on his appearance than his delivery. Rourke is the real star of the show, stumbling around the frame, looking as though he decided to make his own movie to keep Glazer's wacky script at arm's length. Amazingly, the actor is invested here to some extent, but never quite commits to the peculiarity, putting in a token effort of struggle and awe, making sure to paw Fox as much as he can. 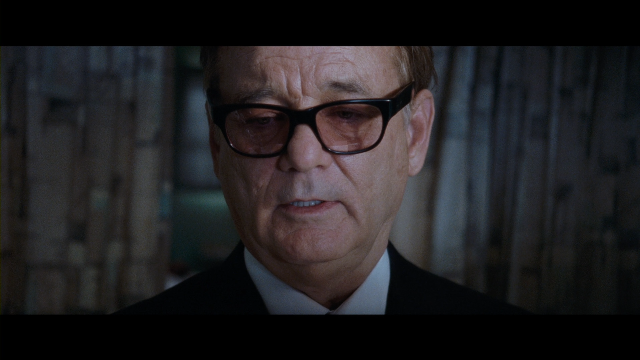 The AVC encoded image (2.35:1 aspect ratio) presentation is an inconsistent affair. There's a pronounced element of grain throughout the entire motion picture, forcing the BD to struggle with textures. Unfortunately, noise is a persistent problem, swarming the actors and locations at times, while boosted contrast levels pull important detail out of the frame. Some scenes look clean and inviting, while others are swamped with muddy shadow detail (hair density is a real problem here). Colors are appealing, with sideshow scenes and nightlife adventures giving off a pleasing neon glow, with hot reds and golds. Clarity has a few pristine moments, with close-ups served well, permitting the viewer to survey faces and budget visual effects.

The 5.1 DTS-HD sound mix supplies a warm feel for scoring cues, with the jazz numbers maintaining a lush presence, with crisp instrumentation. The directional hold on the music is compelling, helping to provide some ambiance to the film. Dialogue exchanges are thin and unconvincing at times, with a few of the more whispered passages difficult to hear. The verbal activity is frontal, while atmospherics feel out the surrounds, though nothing sonically extreme is introduced during the picture. 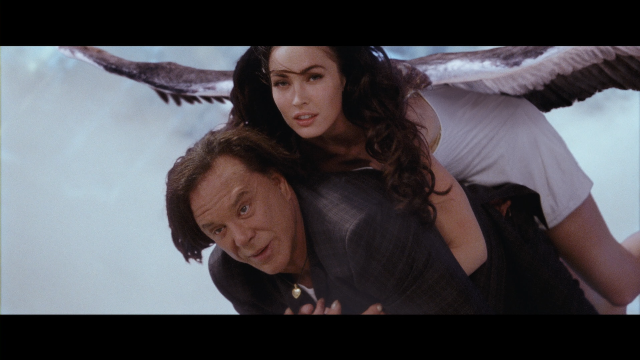 If there's a profound religious crux to "Passion Play," I missed it. I was too distracted by the wings, Rourke's boredom, and shots of booze brands named after characters from "ALF." At least Glazer offers one sight almost worth the price of admission: Lily in flight, clutching Nate in her arms, zooming over rural Canadian splendor. It takes 90 minutes of swollen, eye-rolling dramatic encounters to get there, but to see Glazer actually follow through with his premise is a thing of beauty. Or perhaps the utmost in unintentional hilarity. Either reaction will suffice.