Other // Unrated // September 21, 2010
List Price: $19.95 [Buy now and save at Amazon]
Review by Kurt Dahlke | posted February 8, 2011 | E-mail the Author
Defiled:
It's tricky work naming horror movies these days, since about 75% of available titles set up easy jokes. So yeah, I'd like to say I've been defiled by this movie; it certainly has an exploitative enough premise. But yo, I've figured it out. For bad movies - and especially horror movies, since it seems every aspiring director knows the best way to get experience is splashing a bit of blood around - for bad movies like this, you can't really just take cheap shots, since you don't know if the director just didn't know what he was doing. Even though Defiled is ludicrous and aggressively sub-amateur, I'm not going to unleash the Kraken or anything. Just know ye now, Defiled belongs in a student portfolio, not on DVD.

I'm immediately suspicious about Defiled when I can't find any reference to it, nor director Zachary Paul, on IMDB. Usually a little digging turns something up, but here, nothing. Other indications - namely every other aspect of the movie - confirm my suspicions; Defiled is a movie that should remain hidden.

Yes, Defiled misses the jugular it's going for pretty handily, despite best ridiculous intentions and sincerely odious subject matter. Dig this; seemingly responsible teen Cassidy promises her parents she'll watch over her younger sister, but as soon as the parents leave for the weekend, Cassidy drops her veneer. Little sis is free to do as she pleases while Cassidy uses the Internet; soliciting strangers to rape her in the middle of the night. Did I really just type that? Yes, Cassidy begs for rough, anonymous sex - simulated rape, she's clear in pointing out - by posting her address and phone number online. What could possibly go wrong?

It's not like some idiotic character in a harlequin mask isn't going to take her up on her offer, kill all her friends and nail Cassidy to the floor or anything. But it's cool, because Cassidy's so into the degradation that she nearly develops some cutesy version of Stockholm Syndrome, bitching at her man as he sews up the hole in her hand while she's handcuffed to the porch-swing. (Thank god for rural homes, huh, psychos!) Even with this zinger of a premise and breathless action - reminiscent of the worst of '70s sleaze, but not in a good way - Defiled (believe it or not) outstays what little welcome it has.

Is this producer/writer/director/etc Zachary Paul's first movie? Who knows? So I'll give him the benefit of the doubt, saying that Defiled stinks mostly due to inexperience rather than incompetence. Though vile in concept, Defiled lacks real tension, fear, or the tiniest connection with its characters. Amanda Myers plays Cassidy as a smug, entitled bitch. Though she's primed her own pump for abnegation, we don't care. We'd rather see her get it - but good. Jeffrey Hallman skulks about as the killer, droning dully about following the rules of raping and killing. He's not scary and he looks flat out stupid in his mask, as if he jumped off the wall of an '80s teenage girl. There aren't many exploitation signifiers to enjoy, either; no sex appeal in Cassidy's trysts, and limited gore from a seriously small budget. Paul even misses the one easy shot he actually seems to be setting up for himself; having Cassidy go for a topless make-out session with her hot best friend. Oh, the pain!

Finishing it off, Defiled looks and sounds terrible, displaying washed out black levels, (bad for a movie set entirely in a dark house) posterizing, and other compression problems, poorly framed and photographed shots, and with often unintelligible, muffled audio. Did I mention the grating, amateur-porno-soundtrack? Even with a can't-fail-to-disgust premise, Defiled serves only to sully your DVD player through a full slate of amateur aspects marking this as something like a first year film school project - maybe fun for Paul's friends and family, but not for anyone else. 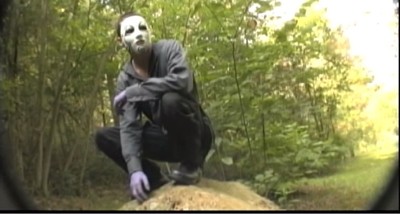 PS - Oh yeah, at about 75 minutes, the movie still feels too long, and a preponderance of shots (see above) have this weird camera-lens outline on the periphery, like the movie was shot with a spy-cam easily purchased from the back page of an Archie comic book. This anomaly is never explained - maybe in the commentary, but I ain't listened to that yet. (At any rate, if you need a commentary track to explain your cinematic choices, you have failed.)

Video:
Defiled hits some serious low water in its presentation. With a 16 X 9 (1.78:1 "video widescreen") picture, the movie wallows in varying shades of gray - shadows and other areas that should be black - and mostly drab, washed out colors. Posterizing, aliasing and other authoring/transfer problems finish the movie off.

Sound:
Dolby Digital 2.0 Audio fares no better, with dialog/screaming levels running the gamut from inaudible to pretty darn loud. Most of it is muffled or full of echoes - room sound gone bad. At least a pretty rancid horror movie soundtrack isn't too loud.

Extras:
Director Zachary Paul and FX artist Jesse Lee contribute a fairly laudatory Commentary Track, and they should be proud - they got the movie in the can and onto DVD. (The fact that the movie doesn't belong on DVD is another matter.) A selection of Trailers is the only other extra.

Final Thoughts:
Zachary Paul's Defiled is a personal achievement in cinema. Paul should be proud that he made a movie, I should be proud I sat through it. But that's as far as it goes; this exploitation attempt probably should have been remaindered to a demo reel. Poorly shot and looking terrible, the movie sports a grim-yet-stupid premise with zero scares, no tension, a dearth of sex appeal, not enough cheap gore, sub-par acting and totally unlikable characters. While Paul may try again - he can only improve - he might actually want to leave this one - a for-sure Skip It - off of his résumé.