Sleepy Eyes of Death - Collector's Set, Vol. 2 (Sword of Fire / Sword of Satan / The Mask of the Princess / Sword of Villainy)

AnimEigo // Unrated // February 1, 2011
List Price: $79.98 [Buy now and save at Amazon]
Review by Stuart Galbraith IV | posted March 4, 2011 | E-mail the Author
Middle-period entries in Daiei Studios' 12-film Kyoshiro Nemuri series, released here under its popularly-known English name, Sleepy Eyes of Death - Collector's Set, Vol. 2, this four-film set is chanbara melodrama at its finest and features Raizo Ichikawa (VIII) in the title role. Though infinitely more prolific with 158 films to his credit, Ichikawa's premature death in 1969 at the age of 37 and a fiercely loyal fan base begat an enduring cult status for the actor in Japan that might be likened to James Dean's in America.

The movies are typical of Japanese genre filmmaking during the 1960s. On one hand their plots are highly repetitive and draw heavily on genre clichés but the filmmaking is consistently polished and highly imaginative - much more, in fact, than the average program pictures being made by Hollywood at the same time. In short, sophisticated filmmakers and actors working in a generally unsophisticated genre.

The 16:9 widescreen transfers are superb and extras include trailers, program notes and image galleries. 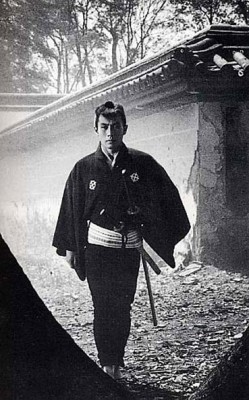 Though I watched them all with just a five- or six-day break in-between DVDs, like most Japanese film series from the Showa 30s and 40s (roughly 1955-1975), the Kyoshiro Nemuri films all tend to run together. Between this set and 35mm screenings elsewhere I've probably seen most of the series, some entries probably more than once, and yet I'm damned if I can distinguish among them, anymore than I can (with a few exceptions) explain the plots of various Zatoichi and "Lone Wolf & Cub" films based on their titles alone. These were the hot sweet potatoes for the Japanese movie-going public, cinematic high-carb comfort food. Ticket buyers knew these movies and their plots even before the lights dimmed; they were as predictable as Big Macs - and that was exactly part of their appeal.

Their plots differed slightly - in Sword of Satan, Nemuri cares for a little boy raised as a carpenter but destined to lead a clan* while in The Mask of the Princess he rescues a 15-year-old virgin - but the films' characters are pretty interchangeable, with the same clichés as American Westerns. The Kyoshiro Nemuri films overflow with deceitful women wanting to avenge their dead samurai husbands or who merely sell Nemuri out for a few gold pieces. In The Mask of the Princess Nemuri faces an army of ninja (another convention) sent by the disfigured daughter of the Shogun whom Nemuri once humiliated. In another convention, while the ninja are stealthily clever and numerous, Nemuri has little trouble mowing them down like dandelions.

Nemuri himself is a masterless samurai, a ronin who strikes an uneasy balance of upholding the noble traditions of the samurai while the movies expose the great hypocrisy of bushido, the way of the warrior, the samurai code. In all the films are corrupt daimyo and amoral samurai; Nemuri exposes the former, always a high-ranking and respected individual, like the "brain heavy" in B-Westerns, always with the less-refined henchman doing most of the dirty work.

Nemuri's signature move is his Full-Moon Cut, which mostly involves the ritual of Nemuri slowly moving his sword in a circle like the minute hand of a clock. Sword of Fire, the earliest film in this set, has relatively little swordplay action and what's there is more a throwback to '50s-era chanbara. However, starting with the next entry, Sword of Satan, the films get bloodier, more violent, and with a greater concentration of action set pieces.

Popularized during the 1950s in a series of novels by Renzaburo Shibata, the character first appeared on movie screens in the form of Koji Tsuruta, in a three-film series fresh from his stint as another famous swordsman, Kojiro Sasaki, in Hiroshi Inagaki's Musashi Miyamoto trilogy. Ichikawa was the final word on the subject, however. After he died there was an attempt by Daiei to continue the series with another big star, Hiroki Matsukata, but only two more films were made.

American audiences may find Ichikawa's cult and the long-lasting popularity of the Kyoshiro Nemuri film series mildly puzzling. Nemuri is not as colorful, at least not in the Western world sense, as Toshiro Mifune's warrior-rogue in Yojimbo or Shintaro Katsu's tragic yet comical Zatoichi. Nemuri isn't at all rascally like those swordsmen, being instead almost misanthropic, whose handsome features yet intimidating, off-putting formalism perhaps drives the films' juvenile heroes and heroines, surrogates for the audience, into coveting his approval.

Mostly, this quartet of titles reflects Daiei's impressive house style. No matter that the films were made by three different directors: in order, Kenji Misumi, Kimiyoshi Yasuda, Akira Inoue, and Kenji Misumi again. Each worked concurrently on the Zatoichi series and other Daiei films, and their visual sense is pretty similar, with Misumi slightly more classical, Yasuda a bit more gimmicky, and Inoue, also a production designer, more interested in lighting effects and using his sets in unusual ways.

Likewise, the movies feature actors and behind-the-scenes talent that was mostly but not always under long-term contracts with the studio. Sword of Fire, for instance, co-stars Tamao Nakamura, the wife of Zatoichi's Shintaro Katsu (and still a fixture on TV variety shows here); Yoshio Inaba, one of the Seven Samurai, appears in Sword of Satan; famous composer Akira Ifukube wrote the score to The Mask of the Princess while director Daisuke Ito penned the final film in this set, Sword of Villainy. 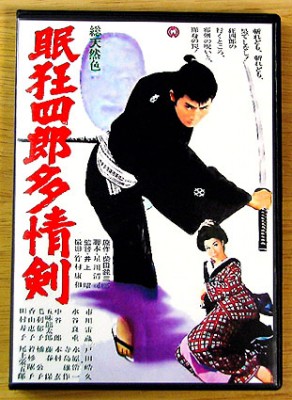 All four movies were shot in Daieiscope, the studio's 2.35:1 anamorphic equivalent to CinemaScope and Panavision. The transfers are splendiferous, showing off the often extremely impressive cinematography - with some especially striking use of color - to best advantage. As usual for AnimEigo, there are myriad English subtitle options: color or white text, with or without cultural-historical annotations, etc. The mono Japanese audio is more than adequate, and the discs are region 1 encoded.

Included are fully translated trailers for the films, also 16:9 enhanced widescreen, along with image galleries and program notes, and a Raizo Ichikawa biography.

Though pretty interchangeable, the "Sleepy Eyes of Death" series is colorful and entertaining, and the superlative transfers here make these a pleasure to watch. Highly Recommended.


* As Nemuri is the half-breed son of a noblewoman raped by a Christian missionary, there may be some significance to this relationship. Or maybe not considering the boy goes back to being a carpenter in the end.