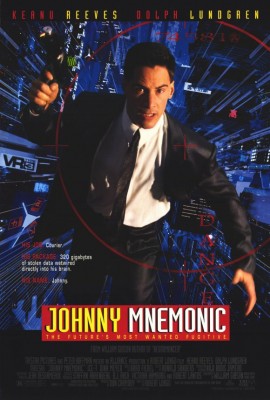 Before he was Neo in The Matrix, Keanu Reeves was Johnny Mnemonic, a human data trafficker in Robert Longo's film of the same name. In a 2021 where data is no longer safe on the Internet, couriers use their brains as hard drives to store and transport massive amounts of data. The premise of Johnny Mnemonic is interesting, but the film is science fiction trash. Nonetheless, Johnny Mnemonic is never boring, thanks to its flashy digital graphics and host of caricature villains.

The appropriately dystopian vibe of Johnny Mnemonic includes a corporate-run society overly dependent on technology and suffering from "Nerve Attenuation Syndrome," caused by overexposure to electromagnetic radiation. Johnny is wired with a neural implant that converts his brain into 160 GB of raw storage. Since that much space runs you about $40 plus shipping on the Internet, hearing Johnny's brain capacity reminded me of Dr. Evil in Austin Powers - International Man of Mystery demanding only $1 million to end his scheming. To use his brain in this manner, Johnny had his childhood memories wiped to clear space, but his handler promises all will be restored if Johnny completes a high-risk job in Beijing.

On the scene in China, Johnny accepts the data, which turns out to be nearly twice the size he can safely transport. This overload begins violent convulsions and a 24-hour countdown to Johnny's brain literally melting down from overuse. To make matters worse, Japanese gangsters are sent by a pharmaceutical company to collect Johnny's head and recover the data, which, if released, would significantly undermine the company's business model. The rest of Johnny Mnemonic is basically an extended chase scene, as Johnny races to download the data and save himself.

There are bits of many other films rattling around inside Johnny Mnemonic. There's Blade Runner, obviously, along with The Running Man and Tron, but Johnny Mnemonic never quite develops its own personality. There are several fun scenes of Johnny literally surfing the Internet, complete with crude digital graphics, as well as a host of wafer-thin characters. Among these, J-Bone (Ice-T), the leader of an anti-technology gang; Jane (Dina Meyer), a bodyguard suffering from NAS; and Dolph Lundgren as the gun-toting, heavily gesticulating Street Preacher.

Not a lot of the action in Johnny Mnemonic makes sense, but that doesn't matter, as none of it is crucial to the plot. I did, however, spend a lot of time wondering whether the clients bothered to back up their data before loading it into Johnny's cranium. Johnny Mnemonic is director Longo's one and only feature film. Perhaps he found working with Reeves so fulfilling that he decided to hang up his hat. Reeves gets a lot of flack for his acting and looking sad, but his performance here is perfectly acceptable. He never gives Johnny any real depth, but the movie never gives anything much depth, so it's a fair trade. The junk villains are kind of fun, especially Lundgren's character, but they fail to elicit much fear.

Image Entertainment gives Johnny Mnemonic a decent, if slightly dated 1.85:1/1080p/AVC-encoded transfer. Taken from a clean print, Johnny Mnemonic never rivals new releases for depth and clarity, but is certainly adequate in both categories. The image is largely free of digital scrubbing, and the moderate grain adds to the film-like appearance. Skin tones are accurate and colors well saturated, but, aside from scenes where Johnny takes to the Internet, the film is fairly drab in the color department. The transfer's biggest issue is its slightly hazy appearance. Much of this can be attributed to the director and his use of smoke and steam on location, but I can't help but think the fog may have lifted with a proper remastering. Shimmering and some muddy contrast also pop up, but the latter is probably also a result of the source and of no fault of the transfer.

The DTS-HD Master Audio 5.1 track is quite active, and the mix makes good use of the surround channels with its sweeping directional changes. The electronic score and effects are equally boisterous, but neither overwhelms the dialogue. For a 16-year-old film, Johnny Mnemonic sounds quite fresh. English SDH and Spanish subtitles are also available.

Only a theatrical trailer is included.

It's interesting to see Keanu Reeves tackling a pre-Matrix science fiction project, but Johnny Mnemonic is neither intelligent nor subtle sci-fi. The film is an extended chase sequence as the titular character rushes to save his head from ruthless gangsters and data overload. The outdated graphics exude a campy charm, and the film supplements a lack of character development with a heavy dose of overindulgence. The Blu-ray, with its decent picture and solid sound, is the way to watch the film. Rent It.