To explain "Rubber" in full virtually guarantees turning off potential audiences to this bizarre French comedy. It's a furious run of absurdity that toys with perspective and convention, exploring the relationship between spectators and entertainment while staging an adventure rooted in the film's strict "no reason" policy, as explained in the opening moments. Oh, and it features a tire that comes to life, rolling around the American southwest on a killing spree using its telekinetic powers. Have I already written too much?

Somewhere in the desert, an audience has been assembled by a nerdy assistant (Jack Plotnick) to observe an event. Armed with binoculars, the opinionated group eagerly waits for the show to begin. Rising up from the sand is an abandoned tire, a black piece of rubber that's achieved consciousness, soon embarking on a tour of the area, killing almost everything with its macabre mental powers. While dastardly events befall the spectators, one man in a wheelchair (Wings Hauser) refuses to stop watching the show, forcing Lieutenant Chad (Stephen Spinella) to continue his pursuit of the fugitive tire, looking to take down the serial killer with help from a French tourist (Roxane Mesquida). 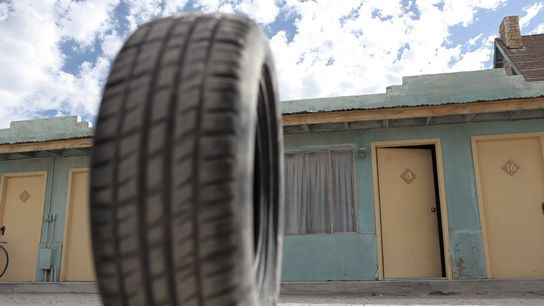 I'm not exactly sure what writer/director Quentin Dupieux has been smoking lately, but it seems to be working. "Rubber" is a parade of oddity, a peculiar ode to film genres and the movie business itself, with the director conducting this symphony of strange with a startling confidence, moving the end product away from a simple visual gag to something more complex and delightfully ridiculous. Yes, it's truly a killer tire film, but there's more here that Dupieux is eager to share with the viewer, assembling a captivating black comedy that opens with a pronounced monologue questioning movie rationale and concludes with a lampoon of industry sequelitis.

In making a rolling tire the main character, Dupieux assumes a tremendous technical challenge, using clever visual effects to keep the killer on the move for extended tracking shots. The tire breathes when asleep and quakes when angry, summoning its power to pick off roadside animals at first, moving on to humans (head explosions are numerous here) who stand in its way. The tire enjoys hotel rooms and television, takes showers after a long day of dusty rolling, and carries on with human qualities to create a nutzoid submission of Lynchian abstraction and road movie serenity, shot with beautiful desert splendor by the filmmaker. 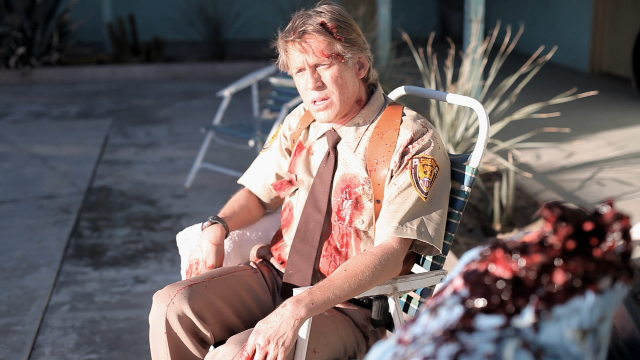 The idea of watching a tire silently maneuver around the interstate might seem a bit too preposterous, yet Dupieux maintains a compelling rhythm to the picture, employing music to keep the tension alive and sustaining a substantial sense of humor. And there's this entire subplot with the spectators to help break up the tire antics, investigating manic efforts from Lieutenant Chad and his cronies to kill off the group, silencing their growing narrative demands -- a witty comment on needy moviegoers and the hardships of dramatic invention. 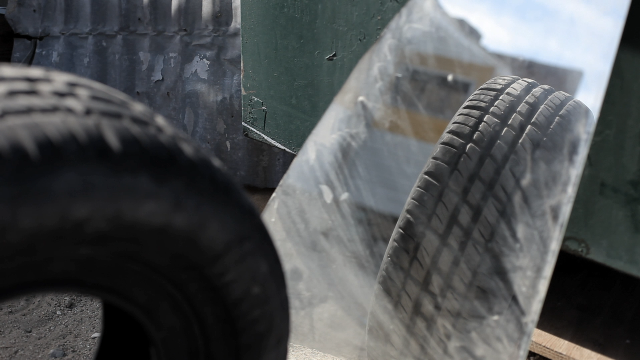 The AVC encoded image (1.78:1 aspect ratio) presentation provides a rich sense of outdoor activity, with the desert locations feeling natural, delivering a warm sense of sunlight. Clarity is strong here, supplying crisp textures on tire antics, gore shots, and interiors. Colors look a little washed out, along with diluted skintones, though more pronounced hues make a strong impression. Noise is a problem, popping up in a few shots, while contrast seems to be a tad off, keeping shadow detail feeble. There's also some artifacting with costumes as well.

The 5.1 DTS-HD sound mix doesn't provide an exhaustively dimensional listening experience, instead leading with a more subtle touch, with a swell hold on directional activity, keeping the oddity moving around with voices and violence. Dialogue is crisp and deep, keeping a satisfactory separation with sound effects (squishy stuff) and soundtrack cuts. Psychic vibrations keep the low-end alive. Atmospherics are light, but effective when desert particulars are employed. It's a clean track, not overly active, but purposeful. 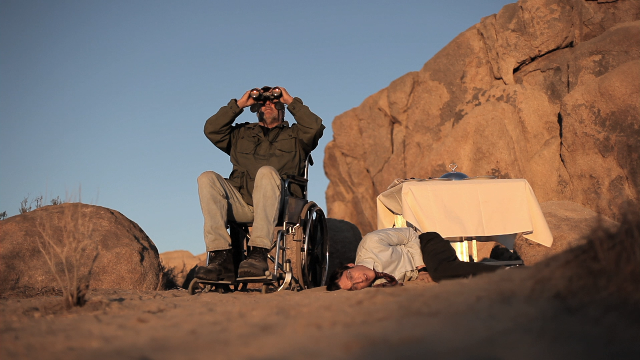 "Interview with Director Quentin Dupieux" (8:34) keeps the spirit of the movie alive, with the filmmaker interviewed by an inflatable sex doll (perhaps a comment on junketeers?), while answers are provided in reversed audio. Make it past the cutesy concept and there are a host of genuine answers concerning the creation and execution of the movie.

"Interview with Stephen Spinella" (4:08) chats up Lieutenant Chad, providing a series of enthusiastic answers that help to understand his perspective on the script and the filming experience.

"Interview with Jack Plotnick" (8:08) demonstrates even more excitement for the feature, this time focusing on Plotnick's passion for Dupieux and his loose shooting style. Audition and motivation talk also fills the conversation.

"Interview with Roxane Mesquida" (3:21) cools down with the French actress, who took the role almost on a dare, attracted to the oddball script and Dupieux.

"Teaser Camera Tests" (:49) reveals the genesis of the movie's look, with the director heading out into the desert to see if HD would suit his filmmaking needs. 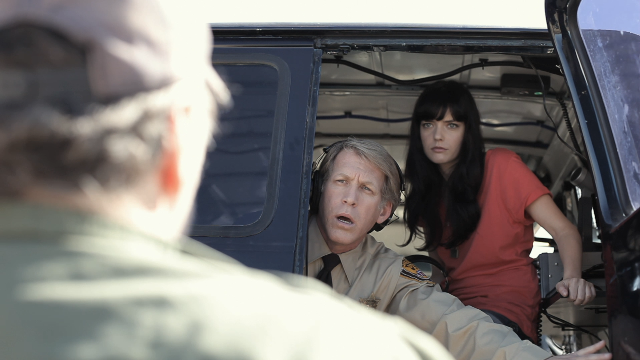 As perhaps expected, "Rubber" runs out of gas about midway through the rampage, exhausting its sense of surprise when the humans start to assume more screentime. Nevertheless, it's an inventive, silly film when it hits a demented stride, supplying a fascinating blend of bloodshed and ludicrousness, making for a memorable romp with a most improbable killer. 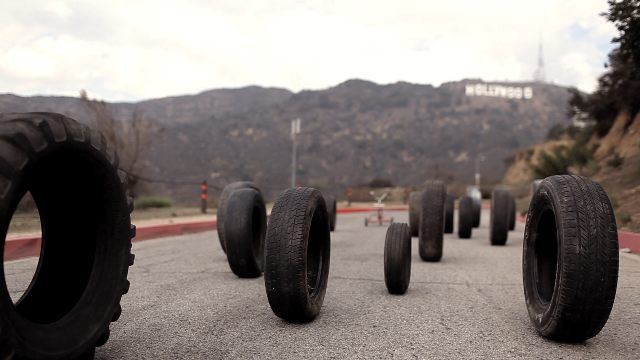