"People make too much of sex. It shouldn't be anything you leave home for."

"The Englishwoman was the most romantic. All she wanted was everything." 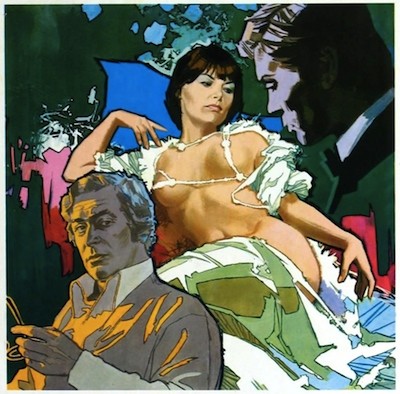 Actress Glenda Jackson stars in The Romantic Englishwoman as Elizabeth Fielding, the wife of a famous novelist and mother of one young boy. Bored with her predictable life, Elizabeth has gone away to Baden Baden to "find herself"--or at least that's how her husband, Lewis (Michael Caine), terms it. Her solo vacation has put him in knots, and the sarcastic disdain for which he holds her restlessness gives us all we need to know about why she probably left. Lewis also calls it "discontent," though Elizabeth says she doesn't deserve to be discontent. Her retort is a sly comment on gender politics and class, one of many such comments peppered through the script for The Romantic Englishwoman, a well-constructed 1975 drama from writers Tom Stoppard (Despair, Shakespeare in Love) and Thomas Wiseman (also the author of the original novel) and director Joseph Losey (Eva).

Another biting insult comes from Thomas (Helmut Berger), the gigolo Elizabeth meets in Germany. Later in the movie, after he has sponged off the Fielding family for a while, Lewis asks the younger man if he ever says thank you, and Thomas replies that for as well as the author lives, it's him that should be showing gratitude, thanking the world for making it so. Thomas is a slippery character. For the most part, Elizabeth sees him for what he is, though she also believes him when he says he's a poet, a claim never truly verified nor effectively dismissed. He is also a drug smuggler, and an accident in Baden Baden has him on the run. That's how he ends up in England, pretending to be a fan of Lewis, and injecting further doubt, suspicion, and strife into the Fielding marriage.

You see, despite the fact that Elizabeth did nothing untoward on her getaway, Lewis has gotten it into his head that she has been unfaithful with Thomas. The novelist is taking a break from prose and is working on a movie that reflects what he imagines as Elizabeth's expedition of ennui. This includes steamy scenes on an elevator with a foreign hustler. Thomas is invited into their home by both spouses for different reasons. Lewis claims that he wants to research this kind of nomadic character and put him in the script, though he really thinks it will trick his wife into confession; conversely, Elizabeth hopes to beat Lewis at his own game and prove nothing happened. The plot develops along a subtle metafictional current: the fiction of Lewis' script becomes the reality of the movie.

The Romantic Englishwoman is a smartly rendered emotional pressure cooker. As Lewis' jealousy grows, it leaves less and less space for anyone else, and it pushes Elizabeth further away. Thomas is like a quiet parasite, feeding on their anxieties, always there with an unnerving utterance when the couple is at its most vulnerable. The writers are careful not to be overly explicit in any of this; for all the smart dialogue, behavior is just as important as anything. Berger is slick and smarmy, and he gives the character a calculated malevolence that informs everything he does. Where he is quiet, Caine is blustery. So much so, it keeps him from completely sticking the landing in the movie's final scenes. There is no groundwork laid for him in terms of exhibiting tenderness, so when he does, it doesn't exactly ring true.

It probably doesn't matter, because it's really Glenda Jackson's movie. The actress is exceptional in the role, carefully balancing all the conflicting emotions that Elizabeth goes through. As a performer, she always appears to be in the moment, and at any time, you can look at her face and immediately understand what the scene is really about. Just look at how her eyes go quiet and her features drop when she realizes she may be just another pick-up to Thomas. Jackson exhibits such comfort on screen, the way she carries herself makes her appear perfectly at ease with appearing on celluloid, drawing the audience into the moment and erasing any hint of there being a camera present.

Not that Losey doesn't take full advantage of how photographable his lead actress is. He often arranges the actors so we can observe Jackson observing the others, and her reactions tell us as much about them as their own actions. He likewise uses reflections and shadows to pull back from the immediate action and cause us to ponder the double roles everyone is playing. Objects and places take on tremendous importance in The Romantic Englishwoman: where something happens and what is on hand when it does adds to the meaning of the event. Most memorably, Lewis' office is decorated with photos of his wife showing different facial expressions. These images cover all four walls. The woman is always with him, always watching, judging, laughing, you name it.

The last act of The Romantic Englishwoman takes some interesting turns. Embracing Elizabeth's fantasy future will ultimately bring Thomas' fantasy present crashing down. The delicate fictions one creates in life unravel as easy as the scenarios writers dream up for their manufactured characters--a point Thomas tries to make to Lewis earlier when discussing his books, right before he emasculates Lewis by pretending to have mixed him up with Henry Fielding (devious!). Yet, in the case of The Romantic Englishwoman, the heroine isn't exactly happy with the ending her authors have handed her. Though the resolution initially appears to be right in line with the cliché finale of most "women's stories" and romance novels, the final shot subverts this premise. The closing image tells us all we need to know about how Elizabeth really feels about being "rescued" and returned to her confining bourgeois lifestyle. Again, Glenda Jackson's face says it all. She has no words, and there are none needed.

Video:
The high-definition version of The Romantic Englishwoman on the Kino Blu-Ray is lovely. The 1080p, 1.85:1 anamorphic transfer wonderfully captures director of photography Gerry Fisher's color design. The 1970s film stock is not overly rendered to the point of losing its original texture; rather, there is a soft grain and subtle detail lent to natural skin tones and the unnatural colors of the period clothes. The earth-tone fabrics clash with the gaudy decorations perfectly. Dark shadows also look very good, and you can see real contrast between bright daytime scenes, the hazier evenings, and full-on night. In terms of print quality, there are only a couple of instances of blemishes, with the occasional brief crackle or line.

Sound:
The original English soundtrack is given a fine LPCM two-channel mix. The audioscape has lots of atmosphere, with strong volume variation and clear tones throughout. More telling, the silences are complete and lacking in any hiss or static.

Extras:
A trailer and a stills gallery, presented in standard definition.

FINAL THOUGHTS:
Joseph Losey's 1975 film The Romantic Englishwoman is a satisfying examination of jealousy and infidelity. The story of a novelist and his wife and the con man who comes between them hits all the scandalous tropes required of a melodrama of this kind, but authors Tom Stoppard and Thomas Wiseman simultaneously comment on the genre and also incisively lampoon the social mores and sense of entitlement of the British upper class. Glenda Jackson is amazing as the film's conflicted protagonist, and overall, The Romantic Englishwoman is skillfully executed, making it easily Recommended.