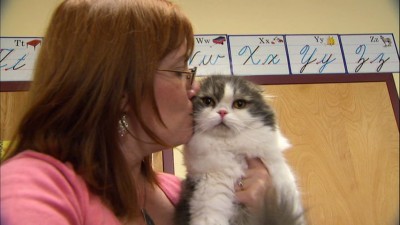 Let's cut to the chase: if you're reading this, you are probably, like me, a "cat person," or at least someone enamored enough of our feline friends to consider watching a five-episode documentary series on the subject (or re-watching it, if you happened to catch it during its initial run on the Animal Planet channel, which originally produced and broadcast it), so the only real question to answer regarding whether or not Cats 101 is for you is, to what extent does it gratify your admittedly compulsive kitty-love? Is it up to the task of widening and enriching your grasp of our remarkably appealing feline friends, which is its ostensible reason for existing? Or, if not, does it at least meet its obligation to pack as much cattitude into its running time as it takes to count as a fulfilling waste of your leisure hours? Unfortunately, the answer is, respectively, "no" and "not quite."

Like what seems to be the majority of the "educational" programming concocted for special-interest cable networks (TLC, The History Channel, The Food Network, etc.), Cats 101 is informational in name only. Yes, each of the five episodes introduces us, through copious cat footage and expert commentary, to a handful of breeds (running the gamut over the course of the series) and offers a run-down of breed origins, history, and particular physical and behavioral characteristics. The series presents itself as a sort of guide for potential cat owners, a way of finding out which breed is right for you. There are graphics that pop up after every segment to let you know how much grooming that breed requires, whether it's suitable for your home, and about any breed-specific health issues. And to be fair, I did pick up some interesting factoids relevant to my own cat ownership, as well as a useful tip or two. But anything informative or practical that might have made its way into the final cut is, to put it bluntly, a cover; the actual, useful information in Cats 101 would easily have fit into one hour-long episode and is readily available online or from any cat breeder or shelter worker that should be the gatekeeper between you and your furry new friend. The real reason for this series' existence is to give us the pure, useless enjoyment of watching cats being cats--playing, jumping, clawing, meowing, staring us down with those curious, defiant little eyes. 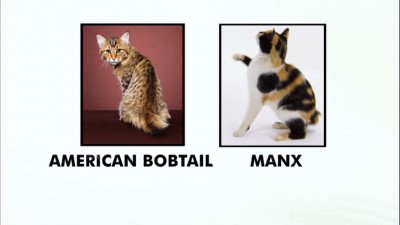 And then there is the just plain unnecessary narration, courtesy of someone called Kevin Draine (I will not indulge in the same folly he so consistently inflicts by going for the cheap pun here), whose omnipresent voice is meant to sound casually delighted and amused but really comes off as self-impressed and glad-handing, like someone trying to sell you something in some badly produced radio advertisement. I would not expect soulfulness in the narration of a TV show about cats, but there is no escaping the obnoxiousness of the oozing insincerity here. Draine's role model is evidently none other than snarky America's Funniest Home Videos verbal butt-inski Bob Saget, who never met a frame of footage he could not "improve" by adding his his voice to it; he goes way, way over the legal limit for hamfisted, groan-eliciting puns (some writers somewhere probably need to be held partly responsible, as well). His commentary is enjoyable to make fun of at first, but that wears off very quickly; fortunately, since its really adds nothing to the experience, you would not miss anything if you were to simply mute the volume and just soak up the cats, mercifully free of Draine's interference. 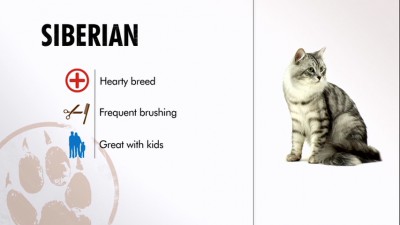 There is also a sort of mindlessly entertaining but worrisomely quasi-exploitative "human interest" angle that the series' creators have apparently felt obligated to pursue. We all know how "interesting" some cat fanciers can be, and, though they have stopped short of bringing on the The Simpsons's beloved "crazy cat lady" character for an interview (that would have been something!), the Cats 101 producers have somewhat cynically assembled a motley crew of odd folks willing to welcome a camera crew into their and their cats' home. Some of the cat owners they build segments around are actually more or less well-adjusted, and I get too much emotional fulfillment from my pet to look down on those who may come off a bit too dependent on their cats for company and friendship. But I wonder what I have to learn about cats by watching a woman weave yarn out of her pet's sheddings, or witnessing the Manhattan-based adventures of a scarily plastic-surgery'd former model who now designs hats that can make the top of your head look like her cat's profile. Or, for that matter, from the San Diego couple who have cheerfully decreased the value of their home to make it more "colorful" for feline visual perception, or from cat owner (and the show's sole "celebrity" presence) Christopher Coppola, who has achieved what you could politely call a lesser degree of fame than brother Nic Cage or cousin Sofia Coppola, and whose name is the only thing that distinguishes him from you, me, or a billion cat owners? That is, somewhat insultingly to both him and us, the only reason for his presence here: you can get a glimpse of someone who's related to someone famous! Isn't this just shameless freak-voyeurism? Like anyone, I cannot resist gaping, slack-jawed and wide-eyed, at this stuff, but it makes me feel cheap. Surely, I can find something more worthwhile to give my attention to, even if it's ultra-light escapism that I'm in the mood for?

My above observation that all the extraneous stuff is just an excuse to let us watch adorable cats running around and behaving in their inimitably cunning, clever, charming way was not really a very damning complaint or criticism. If only they had stuck with that! Instead, in their desperation to keep our butts in our seats until the next commercial break, the creators of Cats 101 have undermined the perfectly enjoyable pointlessness of what could have been a decadent succession of cuddly-playful-kitty-cat-based ''awww" moments. Without all the dull and/or obnoxious padding, Cats 101 would not have given us anything more than would typing "cats" into the YouTube search box, but that would still have been much better than the over-adulterated experience we are left with, which only goes to show how wrong things can go when you inexplicably decide to complicate that simplest of life's pleasures, watching cats being cute. 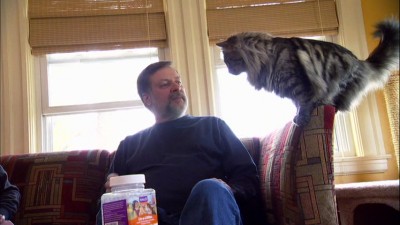 
The digital-videotaped visuals of Cats 101, which was made for widescreen televisions (it will be letterboxed on your 4:3 TV), do not require all that much fuss for a good DVD transfer, and the visual quality throughout is more than acceptable--at least up the standard it would have been when watching the program on satellite or digital cable systems.


The Dolby Digital 2.0 soundtrack is clear and well-balanced, and the sound quality is fully in line with the standard set by most contemporary television programming.


I have it straight from the kitty's mouth: my very opinionated and vocal cat, Nico, yawned her way through Cats 101 and informed me in no uncertain terms that when it comes to getting a big kick out of watching cats do their thing (without the need to pretend that you're learning something, and without the aid of an obnoxious narrator), you can forget cable TV; it's all about the deliriously feline-fetishizing Japanese cult film House. As Cats 101 settles for repetitively pushing all the easy cute-cat buttons (which, and this surprised me, actually does gets old after the first 90 minutes or so), and even then worsens matters by inserting a lot of filler that only serves to dilute the cattitude, it has not much more claim on our attention than any cat-themed screen saver, and it is really only worth a casual glance at the very most. Rent It.