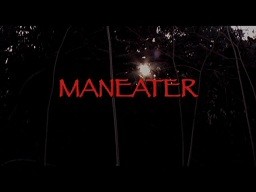 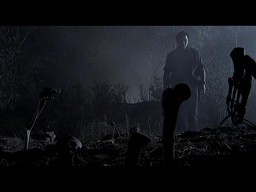 Back in July, EOne Entertainment released Maneater, a low budget creature feature that follows the template of SyFy Original Movie fare and could easily have been included as part of Vivendi Entertainment's Maneater Series line (although that line had an unrelated film involving a tiger titled Maneater). EOne's Maneater has a copyright date of 2009. The fact that, two years later, it is only now being given a home video release might suggest something about the quality of this film. It does star Dean Cain, who a long time ago played Superman in the cult television show Lois and Clark: The New Adventures of Superman. That's really about all this production has going for it; although I am going to give this cheesy film a Rent It recommendation for reasons I'll explain a bit later.

Maneater, like a lot of contemporary low budget "maneating" films, takes place in a small rural town. This particular town is populated by whites and Native Americans, important as the titular creature, a shape-shifting Wendigo, is borrowed from Native American mythology. Dean Cain plays a former FBI profiler named Harry with family problems who now spends his days as the town's sheriff. His wife is missing, for reasons that seem muddled until midway through the film, and the sheriff's relationship with his rebellious 17-year-old daughter Pearl is troubled. Pearl, by the way, is played by Lacy Phillips, who isn't half-bad here. Phillips certainly has the looks and the acting chops to build a modestly successful film career, although curiously, her filmography on the Internet Movie Database is decidedly slight. In any case, Harry's ragtag band of deputies is stretched thin as a series of deaths and murders occur, with the clues leading Harry to believe that someone in the town is a monstrous cannibal.

All right, let's get the negatives out of the way first. Put simply, this is not a good film. The creature pictured on EOne's cover art is not as cool as the one imagined in the movie itself (they often are not in the home video universe). The Wendigo in action looks like some kind of absurd hybridization of the Crypt Keeper in Tales from the Crypt and the backwoods killers in the Wrong Turn franchise. Oh, and it has glowing white eyes(?) Trust me, once you get a good look at the "creature," you'll wonder what all the fuss is about. Outside of Philips and Cain, the acting is fairly substandard; although to give the cast credit, Michael Emanual and John K. Anderson's screenplay doesn't exactly provide Shakespearean dialogue. The gore effects are disappointingly thin and unconvincing as well, however at least this movie doesn't rely heavily on the cartoonish CG effects work that so many SyFy films do. And finally, the video presentation itself is surprisingly awful (more on this in the Video section of the review).

So why am I not turning to a Skip It rating? Well, for one thing, as bad as the movie is, it does channel a certain Ed Wood appeal that lightens the proceedings. Outside of Harry and his deputies, Maneater is mostly populated by nubile pot-smoking, partying teenagers who do really dumb things. They could have easily stepped right out of a slasher movie circa 1984. Their most asinine moment has them going out in the woods and hunting the Wendigo themselves with a ham (I'm not kidding). Their run-in at the 75 minute mark with a bear is beyond dumb and filmed so ineptly that it literally - literally - is laughable. Their libidos, additionally, are in overdrive (another 1980's slasher film teen trait), so exploitation fans get a fair number of gratuitous nude scenes sprinkled throughout. And I will admit that while the plot is formulaic and the dialogue is insipid at times, the actual identity of the shape-shifting killer is a mystery until the very end, with several red herrings successfully thrown in to keep the viewer guessing. 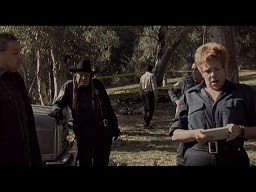 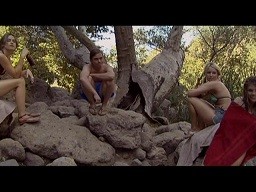 So yeah, Maneater is pretty much bottom of the barrel stuff, as the old saying goes. It's slight and forgettable, but it does have some B-movie saving graces. Rent It if you're into this type of thing. 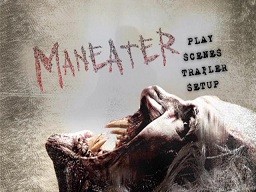 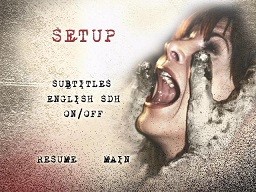 EOne Entertainment presents Maneater in a 1.85:1 aspect ratio - but here's the kicker: it's a 4x3 screen format. Seriously?? This is 2011. Widescreen is the norm. Why on Earth release a 4x3 disc of a widescreen movie? I would have expected this a decade ago, but definitely not today. Needless to say, the image is not what it could / should have been. Details are lacking, and colors are neither crisp nor bright. Artifacts are ever-present as well. Yuck!

The lone audio track is an English language Dolby Digital Stereo affair. For much of the film, the audio mix is serviceable; however, a few scenes (especially a dialogue sequence inside a car) come across rather hollow. Optional English subtitles are available.

Trailers for Frozen Kiss, Bio-Dead, Born of Earth, and The Lost Future precede the main menu. A separate Trailer option in the menu system offers a trailer for Maneater itself. And that is it for extras.

Outside of the fact that its video presentation is substandard (non-anamorphic widescreen in 2011??), Maneater falls into the it's-so-bad-that-it's-watchable category, with a dumb monster, even dumber teen victims, and enough random gratuitous nudity and not-so-special effects work to keep Roger Corman-style exploitation fans mildly amused. Rent it, if you're into this type of thing.