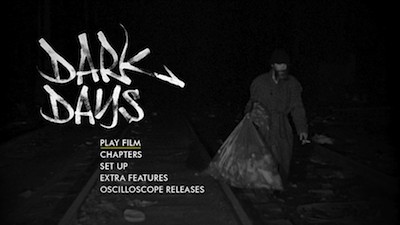 Marc Singer's documentary about homeless people living in the subway tunnels under New York City, Dark Days, was released at the turn of the new century, and to celebrate its decade milestone, Oscilloscope Labs has released a 10th-anniversary edition, marking an upgrade in packaging for a film that has been absent from DVD for some time.

There is no hard sell or high-concept pitch for this one. Singer opens the lid on an entire community living below the streets of the Big Apple. Some of the folks went underground in the 1970s and had yet to move their lives back up top when the film crew went down into the blackness. Living in a state of perpetual night, these tunnel dwellers learn to cope with their surroundings, building homes out of scrap and finding ways to get along. Some of them are on drugs, some are clean, and none of them could have predicted they would end up here. Dark Days follows a select handful, getting a sense of their day-to-day, digging a little into their past, and in general acting as a passive observer, giving the participants a clean platform to express themselves.

We see a variety of activity. One of the subjects takes care of several dogs, another hustles on the streets to find trash he can sell. Another man talks about how he eventually conquered his crack addiction, while Singer shows us another lighting up. There is also Dee, the only woman the film follows for any length of time. Her shack gets burned down due to some disagreement with another addict. We never really learn why, and Singer never asks. There seems to be no whys or wherefores in Dark Days, just as after a while there is really no above or below. There are only the tunnels and the pervasive darkness. Forget ceilings or sky or even time. Living in the subway is an all-encompassing isolation. As one of the men explains it, he thought his life down there would be temporary...and that was five years ago. Basic human concerns keep them going: feed yourself, clean yourself, keep warm. And though most claim to be on their own, they all end up finding some companionship. This is a neighborhood like any other, no matter how unconventional. 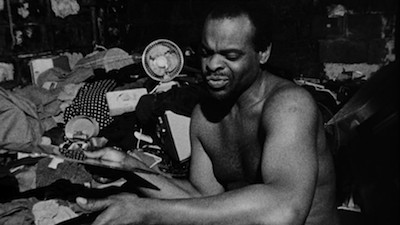 Singer's choice to shoot in black-and-white only emphasizes this otherness. The world contained in the frame is contained even further by the limited light that Singer brings into the picture. Color would only remind us that this is an incomplete existence, which would fail to effectively communicate the exile. Color would point toward a ceiling, whereas black-and-white ensures that the "regular" world is forgotten. There is only the drudgery of this purgatory. One day looks like any other.

Change comes unexpectedly, giving Dark Days a third act where prior there might have been none. Amtrak succumbs to pressure to clean up the tunnels, and this opens the way for advocacy groups to negotiate a safe return to regular life for the homeless being displaced. Hope emerges in the darkness thanks to a government voucher program that sets up the subway's inhabitants in new apartments. The anger at this forced eviction quickly turns to elation, and Singer captures the cathartic demolition of the underground shantytown. For some of these folks, wielding the sledgehammer to knock down their make-shift walls is the first time we see them fully happy. The prisoners are destroying their own prison.

Even so, I can't tell if the coda of Dark Days is intentionally precarious or if it's my own cynicism coming to bear. It's hard not to wonder how well any of the individuals we've met will function in their new lives. Singer shows them in their assigned apartments--cooking, decorating, dreaming of decorating more in the future--and it struck me that in some weird way, they have only traded one enclosed space for another. It's like how addicts pick up other addictions to replace the ones they are getting over--alcoholics turning to coffee, or smokers turning to junk food. Have they emerged into the sunlight only to close themselves off? Ironically, the community has disappeared, now they are even more on their own than they were prior.

Luckily these concerns are answered by some of the bonus features presented in the Dark Days - 10th Anniversary Edition. Mark Singer goes back to visit the tunnels for a new twenty-minute documentary featurette called "The Tunnel Today." It's amazing how different it all looks now. For one, we are seeing many of the locations in color; for two, the tunnels are now open and the sun can come in. Singer finds strange remnants of the lives that were once here: fading graffiti, indications of now missing huts and train tracks, spliced wires, scorch marks from when Dee's shack burned down.

Singer clearly has a melancholic nostalgia for his time spent in the tunnels, living with his subjects, immersed in their experience. This is more evident in the "Life After the Tunnel" featurette, a collection of stills from the movie with Singer narrating. The documentarian has kept in touch with most of the people in the movie and tracked their journeys. For the most part, the main people featured in Dark Days have gotten on well with their lives above ground. They got clean, got jobs, and rebuilt their existences, flying in the face of conventional cynicism and the misconception that people living on the streets don't want change or help. Granted, the move wasn't 100% successful, but nothing ever is. Even so, humanity is perhaps the most resilient natural resource we have. 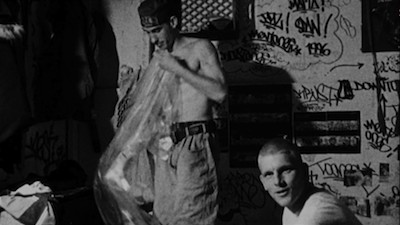 Video:
Oscilloscope has mastered their new anniversary DVD of Dark Days using the original 35 mm telecine, and the results are spectacular. The widescreen black-and-white image is pristine, with a lovely grain and an incredible level of detail. The film is free of scratches, dirt, or damage, and the resolution is razor sharp throughout.

Sound:
The Dark Days soundtrack is presented in two options: two-channel stereo or 5.1. The 5.1 mix sounds great, with booming sound effects and excellent showcasing of the music DJ Shadow provided for the film. It creates a more immersive viewing experience. You are down there in the underworld with Marc Singer's subjects.

There are optional English subtitles for those who require them.

Disc 1 has the movie and some trailers, with its only real bonus feature being a full-length audio commentary by Marc Singer, reflecting on the film and the people in it, and presumably the same one that had been on the prior edition of the disc from 2001.

Disc 2 has a large selection of bonus features, including the two new programs discussed in the main review--The Tunnel Today, Singer's return to the place where he shot Dark Days (21 minutes), and Life after the Tunnel (17 minutes), tracking down the subjects of the movie. The subject is also revisted by Marc Singer in a recent Q&A with the director of the Coalitionf for the Homeless, Mary E. Brosnahan. This is introduced by David Dinkins, the former mayor of NYC, and runs about half an hour. 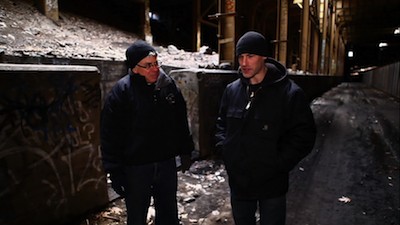 In addition to these features, we also get a mixture of new and vintage material, including The Making of Dark Days, a 46-minute documentary from 2000. (Also, this was apparently on the earlier DVD.)

Fragile Dwelling (27:30) is a new photo essay by photographer Margaret Morton, showing us more of the tunnels and taking us beyond the scope of the film.

Singer presents sixteen deleted scenes with introductory notes from the director explaining them and where they fit into the filming. They are interesting, sometimes fun snippets of conversation and the like. I always feel weird about deleted scenes from documentaries, since a documentary is all about shaping and whittling material. They strike me as more superfluous than even scripted moments from the cutting room floor.

For technical junkies, there is Dark Days Design, five minutes with Jay Hillyer talking about the typographical font used in the movie. Finally, there is the original theatrical trailer. Oh, and there is an easter egg on disc 2. When the menu loads, hit the up button, and a rat icon will appear in the lower left. This leads to DVD production credits.

FINAL THOUGHTS:
Dark Days - Tenth Anniversary Edition is a fantastic package celebrating a moving documentary that chronicles how a group of disenfranchised individuals lived in the subway tunnels under New York, creating their own community in the harshest of conditions. Starkly filmed in stylish black-and-white, the film doesn't finch from the more difficult aspects of the story, but it ends on a hopeful note, one borne out by the retrospective bonus features. It's an affecting story, one that inspires compassion and demands that even the most jaded amongst us question how we view the homeless. The restoration is remarkable, too, making this Oscilloscope release Highly Recommended. 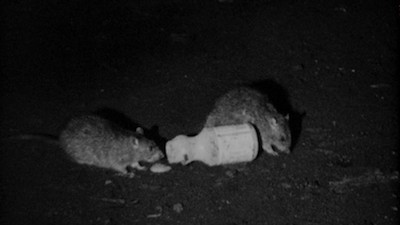