"Battle: Los Angeles" isn't an alien invasion film, it's a military picture with the occasional alien appearance. The marketing trumpets a global perspective on trespassing extraterrestrials, but the picture actually takes place almost entirely in Santa Monica, boiling down a sense of massive widescreen scope to a few city miles, placing the audience into the driver's seat as a besieged platoon attempts to defend themselves against an unknown enemy. "Independence Day" this picture is most certainly not.

Aliens have attacked Earth, leaving the locals stunned and shaken as vicious armies rise from the oceans to begin their extermination of human life. On the ground, a team of Marines has been assembled to help evacuate Santa Monica before it's blasted into oblivion to halt advancing alien activity, with Staff Sergeant Michael Nantz (Aaron Eckhart) called back into duty after a troubling history in Afghanistan. Storming the city, the platoon encounters numerous alien warriors and ships armed with immense firepower and technical superiority. Struggling to survive, the team comes across a few frightened civilians (including Bridget Moynahan and Michael Pena) they must protect, finding the road to rescue blocked by a relentless enemy that's difficult to kill. 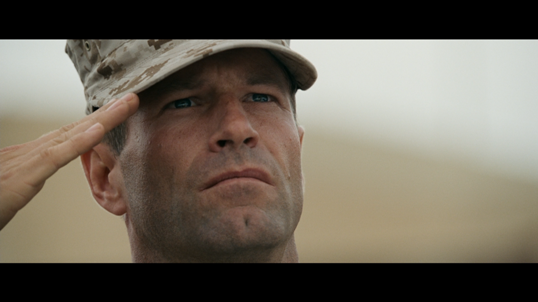 The concept behind "Battle: Los Angeles" is to take a sci-fi premise and shape it into modern militaristic mayhem, with director Jonathan Liebesman ("Darkness Falls," "Texas Chainsaw Massacre: The Beginning") deploying ceaseless amount of shaky-cam stylistics to pound the viewer over the head with an impression of front-line documentarian realism. It's a concentrated effort to turn the movie into sensory overload, excitedly mimicking brutal Iraq War videos viewed on the news and internet. It's a tricky concept, and one that's not especially novel, but Liebesman is committed to the cause. He wants you to feel trapped in the middle of the action. He wants you to feel the heat of combat on your cheeks. Apparently, he also wants you to barf up your popcorn, with a quaking camera aesthetic that's intolerable to endure at times, with every last twitch of movement covered by a swaying frame.

"Battle: Los Angeles" is a lot of noise covering for very minimal substance. There's a script credited to Christopher Bertolini, but I don't exactly understand what he's responsible for. The dialogue and plot highlight a hornet's nest of clichés, pulled from every last war film, spending the opening 15 minutes of the feature developing faceless characters of no discernable personality before the carnage begins. Only Nantz is handed an arc to explore, but it's a hoary beast concerning a broken leader rekindling his inner fight, rising to lead his boys to victory. The rest of the platoon is filled with unknown actors counted on to continually scream and grunt, waiting for their eventual death at the hands of a special effect. Instead of intensely investing in the Marines and their individual quirks (think "Aliens"), Liebesman plays the group as nondescript as possible, hunting for sobering realism while sacrificing engaging cinema along the way. 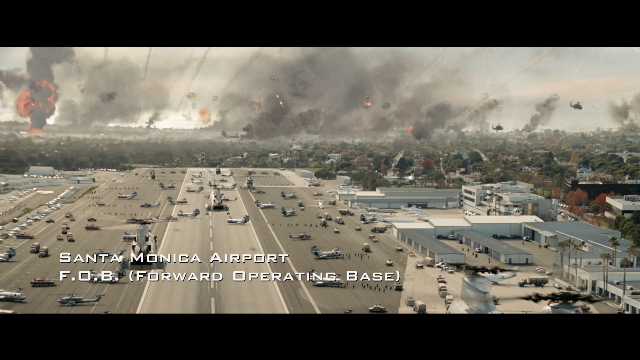 The same emptiness carries over to the enemy. The invaders from outer space are never revealed in full, reduced here to a squishy suit of organs and bio-weapons, viewed primarily in the distance to save on visual effect fees. There's no defining moment where the Marines examine alien details, allowing the viewer a full appreciation of the growing threat. The baddies are an unexplained menace, with a true operational dissection likely saved for the sequels. They have laser guns and space ships, and they excel at reducing Los Angeles to rubble. However, the film never feels like war. It feels like a pedestrian video game. There's no cinematic spirit or personality to delight in, with the picture one mindless display of scurrying and screaming after another. The effect is more numbing than rousing. 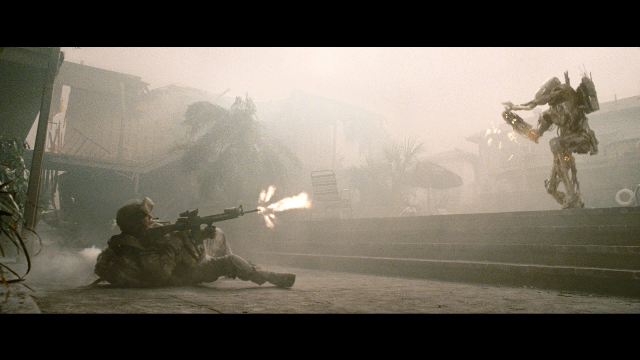 The AVC encoded image (2.35:1 aspect ratio) presentation on "Battle" looks very clean, though superbly detailed, with all manner of mayhem and emotional distress easily observed. Textures are marvelous throughout, best with urban devastation and military distress, capturing a sweaty, nightmarish intensity with an ideal crispness. Colors are strong here, though most play into a bleak palette, eschewing vibrancy to hold to procedural hues. Still, costuming and California landscapes retain a sizable pop. Black levels are supportive, sustaining the screen energy without swallowing the fine details. Skintones look very natural here, while alien life keeps to a brownish/greenish consistency.

The 5.1 DTS-HD sound mix is a commanding aural experience, drilling a sense of pulsating urgency and circular threat into the listener. Directionals are extraordinary, keeping energy up through constant deployment of discharged gunfire and chatty soldiers, while airplanes and alien craft also supply a pleasing sense of movement. Dialogue exchanges retain an interesting unpredictable quality, bouncing around the surrounds, while the front carries most of the heavy dramatic tension and hollering. Scoring is held back some, though never lacking weight. Low-end is a real treat, providing a rumbling anchor to the screen bustle, making explosions and general military vehicle advancement stimulating. DVS, French, Spanish, and Portuguese tracks are also included. 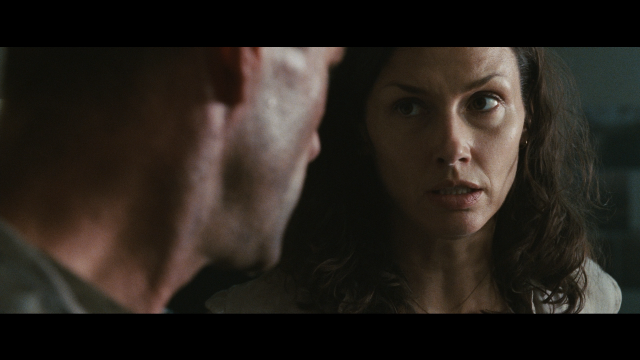 "Behind the Battle" (6:44) takes to promotional path to convey the dramatic intent of the feature, reinforcing the realism in play. Interviews with cast and crew spread platitudes while film clips eat up the run time.

"Directing the Battle" (6:33) sits down with director Jonathan Liebesman, who discusses how he secured his gig, using his own demo reel to impress the producers (clips of his homework are shown).

"Aliens in L.A." (17:57) moves over to visual effect design and execution, with cast and crew chatting up the creation of the invaders, displaying the various steps of construction. A helpful amount of visual experimentation and planning is provided, while also covering how the alien influence was captured on the set. The BTS footage is excellent here.

"Preparing for Battle" (5:15) explores the actors and their physical commitment to their roles, with talk of heat, mistakes, and thespian focus offered here, with the performers looking to keep stunt performers at bay by attempting their own acts of screen heroism.

"Boot Camp" (10:18) covers the pre-production effort, where the ensemble was sent away to train with real marines, bonding over shared hardship and military education. The featurette actually provides an average day in the training, with irritable actors sent through a routing of discipline to enhance their performance.

"Creating L.A. in LA" (5:46) surveys the technical effort to create Santa Monica in the heart of Louisiana, where the crew worked overtime to manufacture a seamless look for the film. It seems destruction takes quite a lot of time to replicate.

"The Freeway Battle" (5:18) again chronicles the labor of design, with a mix of greenscreen, rubble, and fire creating a war zone playground for the cast and crew to run around in, generating screen tension on a grand scale. 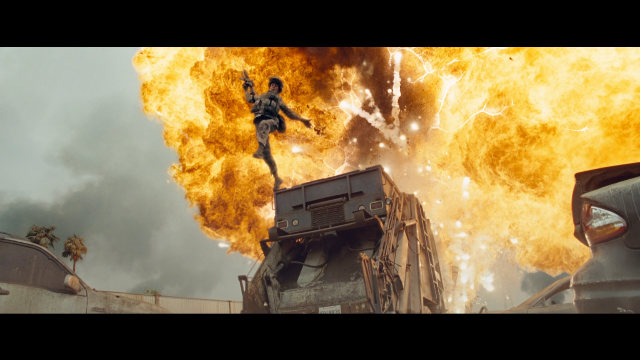 "Battle: Los Angeles" finally hits a more blockbuster tone in the final act, where the squad takes on an enormous alien control ship using all of their resources and military instinct. It's a case of too little too late, breezing past a substantial threat (or final boss level) to madly dash toward the anti-ending, where the story intends to carry on into numerous sequels, maybe exploring skirmishes in additional Los Angeles suburbs, I don't know. Perhaps if more concentration was put into building an engrossing, impassioned first installment, this allegedly global invasion would be an event worthy of a franchise. Instead, "Battle: Los Angeles" is a tiresome fireworks display starring a cast of cardboard cutouts, quick to make a visceral fuss but frustratingly negligent when it comes to providing a reason to care. 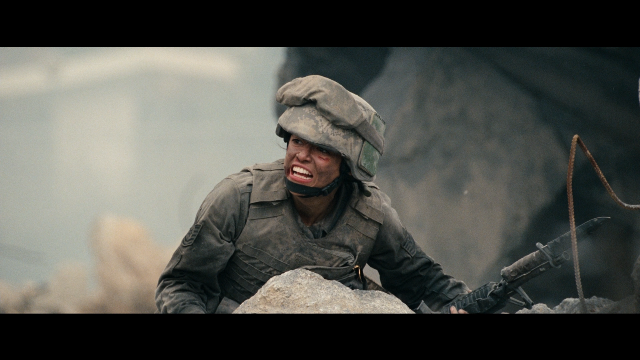