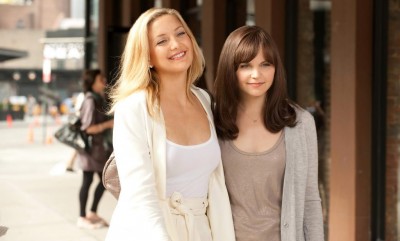 "Something Borrowed" is a romantic comedy, thus immediately placing its contents outside the border of reality. That whimsy established, this movie is still a total crock. Even by the low standards set by the occasionally nauseating genre, the feature doesn't play fair, electing to strip a complex situation of romance and friendship free of any human qualities. With all the crude good vs. evil scenarios passed around in this unbearable motion picture, it might as well be a western.

Rachel (Ginnifer Goodwin) is turning 30, and life is starting to lose its luster. Single and childless, Rachel has to contend with her BFF Darcy (Kate Hudson), a swinging gal engaged to Dex (Colin Egglesfield), a responsible young man and Rachel's former crush in law school. When true intentions are revealed after a night of drinking, Rachel and Dex commence a secret affair, looking to make up for lost time. Unable to fully commit to the plan, Dex is hesitant, while Rachel feels anxious, lacking the gumption to sever her toxic friendship and make herself happy for a change. With pal Ethan (John Krasinski) urging her to take command of the situation, Rachel can't quite chase her instinct, leaving Dex in a miserable position, caught between a woman he doesn't love and a woman he can't have. 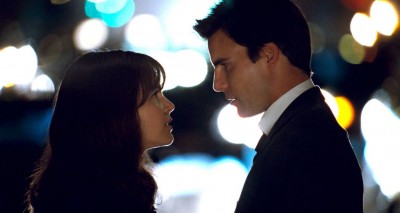 Adapted from the Emily Giffin novel, "Something Borrowed" enjoys a little more expanse than the average romantic comedy, working with a hefty supporting cast of characters, while attempting to address a lifelong commitment forged between snobby Darcy and mousy Rachel -- a twinkly girl union solidified through Salt-N-Pepa dance routines and poorly photoshopped pictures from "their past." The challenge of condensing the novel into a workable film proves to be quite a test for screenwriter Jennie Synder, who doesn't cleave away any unnecessary business, including every plot turn she can get her hands on, leaving the finished film overflowing with meaningless asides and fuzzy characterizations in dire need of focus.

Credit must be paid to Goodwin, who offers an inviting spark with her performance, gamely playing up Rachel's unease and low self-esteem as the love of her life is about to marry her creepy best friend. In an enormously formulaic picture, Goodwin is unpredictable to a certain degree, remaining subtlety expressive and sincere. Egglesfield also surprises, working past his Ken doll parts to bring Dex to life as a man unable to decide on his future. The actor is direct and able to perform with his mouth shut, which is more than I can say for Hudson, with this her laziest role yet. As the vapid, petty, boozy bride-to-be, Hudson slips into villain mode all too easily, refusing to defy the script and infuse Darcy with an essential soul. 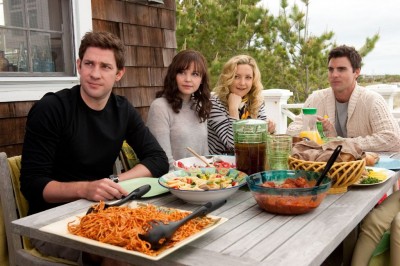 The lack of a human perspective is what ultimately torpedoes the entire motion picture. Director Luke Greenfield (the equally laborious 2004 dramedy, "The Girl Next Door") doesn't tighten the story or question the characters, sticking to his checklist of clichés and reprehensible behavior, while encouraging Krasinski and co-star Steve Howey to steal scenes as the comic relief of the film, though both men are clearly unsuited for the job. The plot should only concern Rachel, Darcy, and Dex, but the script insists on feeling out every last corner of melodrama, turning parts of the movie into pure absurdity. Dex isn't simply facing the wrath of Darcy if he cancels wedding plans, but he might upset his mentally unstable mother. Ethan isn't just a shoulder to cry on, but yet another shy-guy complication in Rachel's newly flourishing love life.

And Darcy? Well, she's just a one-note jerk, because that's easiest. Heaven forbid there's an honest confrontation in the story, treating delicate emotions with the respect they deserve. Nope. Just crank up the monotonous modern pop hits, stage a few near misses, and conclude with a pregnancy. Who needs substance when the obvious is a proven seller.

"Something Borrowed" eats up nearly two hours to sort itself out, taking an eternity to solve basic standoffs and deal with such silly men. A romantic comedy doesn't have to be a hardcore slog through the crippling realities of love, but fantasy shouldn't feel like punishment. Trying to make intimacy a community event cripples whatever it is this film is ultimately trying to sell.