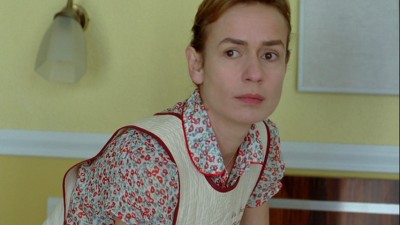 Caroline Bottaro's Queen to Play (Joueuse), about an ordinary woman's discovery of a passion beyond the routines and exigencies of her working-class life, doesn't suffer from false modesty; among its numerous virtues, it genuinely is modest. But it is just that willingness to keep it simple and laid-back that lets the film's valuable insights--you could even reasonably say profundities--shine through in the end.

Sandrine Bonnaire (À nos amours, Vagabond, La Cérémonie) is Hélène, a humble, energetic, attractive woman approaching middle age who years ago transplanted herself to a small village on the French isle of Corsica in order to settle down with her husband, Ange (Francis Renaud), who labors at a job with diminishing prospects in a shipyard and longs for a lost past in which reliably powerful, unionist labor solidarity made conditions less stressful. Hélène and Ange's teenaged daughter, Lisa (Alexandra Gentil), expresses her adolescent rebellion by disdaining her parents' hard work and bemoaning the limiting humbleness of their class. For her part, Hélène supplements the family income by working as a maid at a local tourist hotel and, on "spare" afternoons, busying herself in the same capacity for a well-off, widowed, distinguished American expat, Dr. Kroger, (Kevin Kline), who lives in a splendidly rustic old mansion a scenic bus ride away from the town. One afternoon, while changing yet another set of hotel sheets, Hélène spots two honeymooning American guests (Jennifer Beals (The Last Days of Disco) and Dominique Gould) playing a languorously erotic game of chess on the balcony, and she is oddly captivated by what she sees. When the American woman comes back in, notices the maid's unusually rapt interest, and innocuously asks her if she plays, Hélène is more reluctant than necessary to admit that she doesn't; and when she discovers a chess set at Dr. Kroger's not long thereafter, the desire awakened in her by her interest in the game and what it seems to represent becomes a catalyst for change in her attitude toward her marriage, her work, and herself. 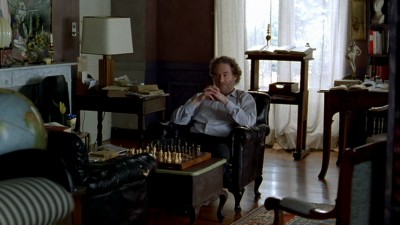 Queen to Play is the sort of tale of empowerment and self-discovery that we've seen often (and tiresomely-done) enough to elicit a certain "here we go again" sigh of resignation when we realize what the set-up is and where it's likely to be headed. But that initial dubiousness proves unwarranted. What Andrew Sarris once pointed out is reinforced yet again: it is not the "what happens" but the "how it happens" that makes or breaks a movie, and how Queen to Play's events happen is done with a surprising degree of gracefulness and astuteness. This could be due to the film's being from outside the U.S. (or at least outside Hollywood); Bottaro feels no need, and has not succumbed to any external pressure, to make her protagonist into a super-heroine or her triumph into anything more earth-shattering than it would be in reality. With the aid of Jean-Claude Larrieu's (Elegy) restrained, classically elegant cinematography, Nicola Piovani's pleasant but unobtrusive score, and Tina Baz-LeGal's montage--and through her skillful mise-en-scène and the performances she encourages from Kline and Bonnaire--Bottaro provides a context in which she can carefully avoid overloading the film's events with a sense of urgency that ever feels in any way out of proportion to the scale of what's going on. This is a film that is happy to be sincerely about the real potential for glimpses of the extraordinary within ordinary lives, so the characters' journeys are neither afflicted by crisis nor utterly transformed by big breakthroughs (don't let that DVD cover art fool you--nobody ever leaps into the air like they used to do in the old Toyota commercials). They just deal as best they can with the unavoidable, medium-sized struggles that provoke and drive (and sometimes, when polished off successfully, gratify) most of us, most of the time. 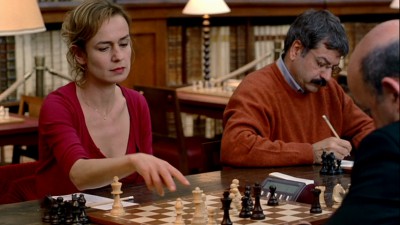 Bottaro tidily steers clear of the two most obvious pitfalls latent in Queen to Play's scenario: an arbitrary love story or a Corsican Board of Tourism presentation. Certainly, there are some lovely views of the surroundings; the film is beautiful, if not extravagantly so. But these images always respect the limits of what would exist for the characters as they move through their surroundings; so, while we do get to enjoy the beauty of the village and its natural surroundings, we remain thankfully far from cloying, fetishistically postcard-perfect A Good Year territory. As for the relationship between Hélène and Dr. Kroger, if played as a romance, it would have left us with, at best, something less lean and precise than the film manages to be with such deceptive casualness; Queen to Play would be inaccurately categorized as a romantic comedy. Its central relationship is mentor-to-neophyte, and that is certainly engaging enough without pushing it into an artificially "more dramatic" love story. Though ever-so-slightly less asexual and with ultimately much smaller stakes, what develops between Bonnaire and Kline (who, notably, despite playing an American, has, in keeping with his character's background, taken the trouble to speak more-than-decent French throughout) is not unlike the mutually respectful friendship achieved between Clint Eastwood and Hillary Swank in Million Dollar Baby. It is difficult to imagine a female-empowerment scenario more discreetly yet effectively executed: it is all in the emphasis, and Bottaro (following Bertina Henrichs's novel, which she adapted into the film's screenplay) emphasizes Hélène's seduction not by any other person but by a game that, while her mastery of it does not provide any magical solution to the unavoidable conflicts and disappointments of life, does rescue her from a certain ennui and lack of confidence. It adds something that was missing for Hélène, a new level of interest and fulfillment that the film convincingly implies is necessary, no matter who you are, to a well-lived life. 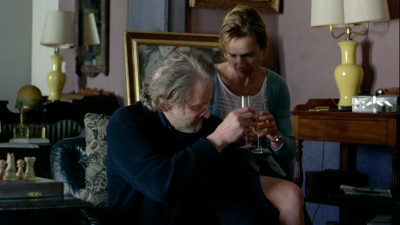 
The quality of the transfer is good to excellent; there is some very occasional flickering of the image that reminds us this is not a high-definition presentation, but it is overall a very nice one, with all of the film's colors and lighting coming through with their original vividness and clarity intact.


The disc offers two flawless, crystal-clear, multi-dimensional audio options: Dolby digital 2.0 and Dolby digital 5.1, both in French (the only difference being that, of course, the sound is more widely dispersed and thereby somewhat more nuanced and layered in the 5.1 mix). The English subtitles are nicely translated and well-designed.


Le Making of Joueuse (yes, the French have allowed the English "making of" into their well-guarded language), a 20-minute behind-the-scenes featurette, is more interesting than most. It was undoubtedly made as PR for the film, but what Bottaro, Bonnaire, Kline, and some of the advisers on the film (including some actual hotel maids) have to say is thoughtful and relevant to our understanding of the main feature.

The disc also includes Queen to Play's theatrical trailer and, in the case insert, an in-depth interview with Bottaro and Bonnaire about the process of making the film.


A great example of how respecting the natural limits of your story can give you a huge amount of freedom with which to execute it beautifully and resonantly, Queen to Play is a "small" movie about a relatively unremarkable woman trying to find some little bit of transcendence over and above the humdrum, and it really stands out just by virtue of the care with which director Caroline Bottaro and stars Sandrine Bonnaire and Kevin Kline have crafted it. So often, movies about the possibility of change and empowerment insult us with false hope and simplistic reassurance; this is one that manages to be reassuring and hopeful without ever condescending to us or letting its head stray into the clouds. Recommended.