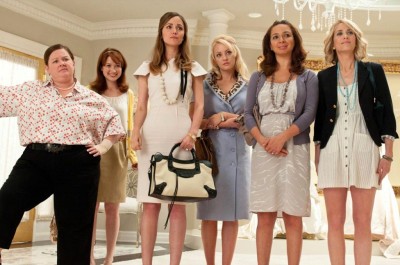 "Bridesmaids" has more than its share of wonderful moments exploring the ease and crisis support command of female friendships, a sensitive tenor not seen nearly enough on the big screen. In fact, the film is best slipping inside this intimacy, which goes a heck of a lot further than any of the gross-out jokes co-writer/star Kristen Wiig serves up to play to the back row. "Bridesmaids" is a hoot, but it's also ridiculously overlong and surprisingly unadventurous, almost afraid to pursue its most compelling qualities.

Thirtysomething, broke, and stuck in a nowhere relationship with a jerk (Jon Hamm), Annie (Kristen Wiig) is struggling, unable to break her depression. When news arrives that her best friend Lillian (Maya Rudolph) is getting married, Annie is psyched to assume maid of honor responsibilities, helping to corral wedding party pals Becca (Ellie Kemper), Rita (Wendi McLendon-Covey), Megan (Melissa McCarthy), and Helen (Rose Byrne), and lead them on a wild ride of bonding activities. However, when Helen and her sophistication rises to the challenge, assuming control of the event, Annie finds herself left out of the fun, fearful she's lost her pal. Sharing her sorrows with supportive cop Rhodes (Chris O'Dowd), Annie is forced to confront the trainwreck she calls her life, hoping to salvage a connection to Lillian and restore her confidence. 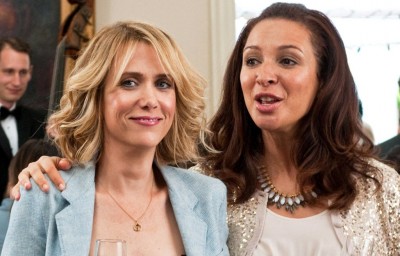 What Wiig and co-writer Annie Mumolo attempt with "Bridesmaids" is a restoration of reality to the "chick flick" genre, placing value on feminine interplay instead of a routine of superficial behavior. While it's hardly scientific, the script does an amazing job creating a familiarity between the characters, constructing them with respect for the pitfalls of companionship and the cocoon of isolation. In fact, the highlights of the feature are born from moments of confession and goofballery shared between Lillian and Annie, who struggle to define their friendship now with marriage looming on the horizon, losing their bond to the machinations of wedding plans, with Annie fearing she's unable to keep up due to her financial and social limitations. That core of concern is fairly unique to films of this ilk, making "Bridesmaids" special and sporadically poignant. The script understands heartache and fear of separation, creating some startling sincerity along the way.

Unfortunately, much of the insight is lost under the sheer weight of footage assembled here, with director Paul Feig and producer Judd Apatow taking 125 minutes to tell a simple story of redemption. "Bridesmaids" is indulgent to a fault, permitting the ensemble a chance to battle with their improvisational skills, while feeling out every corner of Annie's torment. Scenes often have difficulty finding closure, while the script is too eager to set up shticky moments during confrontations, urging the cast to fool around endlessly while Feig refuses to cut away. I understand a director falling in love with his own picture, but this is a film that demands focus and pace, requiring a tighter edit. Instead, "Bridesmaids" wanders, often infuriatingly so, always sniffing around for place to squat, killing any forward momentum. 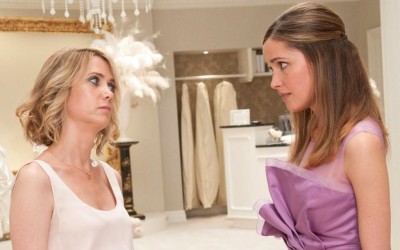 Also troubling is the script's insistence on gross-out humor to retain shock value, hoping to compete with the bad boys of comedy by staging its own bodily function horrors. Wiig and Mumolo are too smart for this nonsense, and a central scene where the women face food poisoning during a dress fitting is an unfunny waste of time. After all, the script wants the audience to fall in love with these characters and care about their personal concerns. It's difficult to gain any sort of sympathy with the ladies puking on one another's heads or expelling diarrhea into a sink. The picture is filled with weird, wildly divergent tonal shifts like this. Perhaps the first-time screenwriters used a Tyler Perry movie as their template.

Don't get me wrong, "Bridesmaids" is perfectly amusing in fits, and Wiig completely charms in the lead role, capturing the sickening feeling of exclusion while delivering effective one-liners and silly business. The picture is funny, but it's too easy (the male roles are cartoons) and eager to pander to make an impression, taking forever to arrive at foregone conclusions. The laughs are there, but it requires a surprising amount of work to stay invested in the fates of these hilarious women.