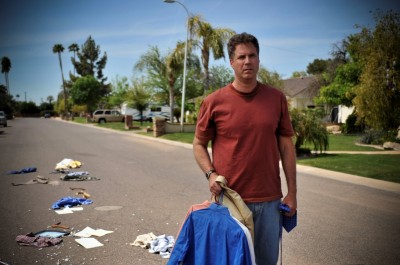 I like Will Ferrell when he slips into serious dramatic actor mode. The creative tidal change suits his abilities, permitting the perennial clown an opportunity to show off his unexpected range. "Everything Must Go" is perhaps Ferrell's most consistent work as an actor, stepping inside a dubious character enduring the worst week of his life. Though streaks of comedy are present, this is Ferrell crouching in a dark corner, playing a complicated role in an unsteady, though rewarding psychological drama.

Nick Halsey (Will Ferrell) is an alcoholic who's just been fired from his job after years of tumultuous performance. Coming to drown his sorrows at home, Nick discovers his wife has left him, locking him out of his residence and spreading his belongings all over the front yard. Destroyed, Nick plants himself in his favorite chair and begins to drink his problems away, encouraging the company of Kenny (Christopher Jordan Wallace), a lonely kid, and Samantha (Rebecca Hall), his new neighbor, a pregnant woman caught up in her own domestic drama. Forced to turn his makeshift lawn home into a yard sale, Nick reflects on his life and limitations while giving all of his possessions away, finding difficulty coping with his choices, much to the frustration of his sponsor, Frank (Michael Pena). 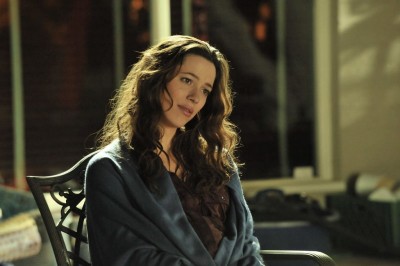 Adapting the short story "Why Don't You Dance" by Raymond Carver, first-time writer/director Dan Rush generates a convincing Scottsdale pit of despair for Nick, shaping a tale of anguish that is perfectly content to stew in the unease. It's a simple shell covering a complex character study, observing a businessman who's rehearsed success time and again hitting rock bottom, only to find he enjoys the view to a certain extent. It's a troubling, sad tale of eroding ambition and encroaching consciousness agitated by alcohol, with Nick consuming endless cans of beer (the Pabst Blue Ribbon executive have to be thrilled with the product placement here) to help get him through the shock. Rush contains the elements with a clean widescreen image, allowing the evils to be observed without too much melodramatic interference, at least for the first half of the film.

Rush isn't looking to treat Nick kindly, which is a major surprise. The drunk is prone to violence and harbors a shady past of hazy memories, a few that have haunted him, torpedoing his career and marriage. He's easily irritable, pushed into a situation he's unprepared to handle on his own, opening up to friends and neighbors as a way to retain what's left of his good nature. In a tremendous performance, Ferrell expresses rage and habit with a subtle reach, using his natural poker face to articulate an interior detonation that leaves the character paralyzed with grief. Refusing invitations to explode with emotion, Ferrell plays it close to the vest, using his natural sense of humor to bring viewers in close, but committed to an intriguing instability that gives Rush a sturdy dramatic foundation. Ferrell's performance is revelatory, creating an authentic sense of disturbance. 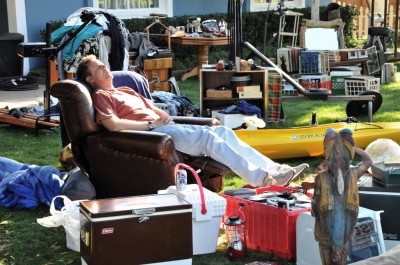 "Everything Must Go" contains a few false moves, including a film-stopping monologue where Nick shares his morbid suburban knowledge with Samantha, a point registering more profoundly through visuals than labored screenwriting. Rush also aches to conclude on a note of hope, extending the story past its expiration date, searching for a poignant closer that's unnecessary. The script has some major problems, but it's not enough to smother the final work, which finds a powerfully human note to play, fashioning a credible look at a life slowly sliding down the drain, and a man who gradually understands he's the only one who can stop the pain.