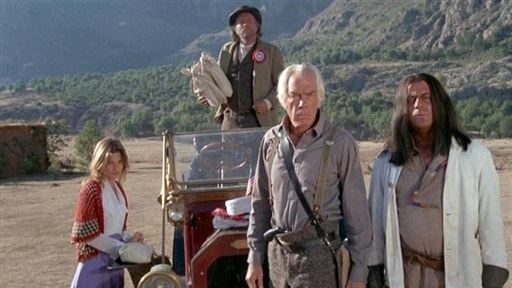 The Great Scout and Cathouse Thursday
is an Only in the 1970s kind of experience, from the elongated
title down to the crappy film stock on which it was shot. A ribald,
anarchic comedy that wants to be more edge and politically savvy than
it actually is, the movie is ultimately let down by a lack of imagination
at the conceptual level and the blind eye that director Don Taylor casts
over matters visual.

The "great scout" of the title
is Sam Longwood (Lee Marvin), a former Army scout and now a has-been
frontiersman. He and his half-breed partner Joe Knox (Oliver Reed),
are out to recover money stolen from them by former mining colleague
(and current rail magnate and gubernatorial candidate) Jack Colby (Robert
Culp). A chance encounter between the old partners spurs Longwood and
Knox to chase Colby across the West as Colby stumps for presidential
candidate William Howard Taft. Along for the ride are a disenchanted
young prostitute known as Thursday (Kay Lenz) and filthy old souse Billy
(Strother Martin).

Great Scout's screenplay,
by Richard Shapiro, strives to embrace the radically shifting racial
and sexual politics that were dominant in the 1970s, but can't quite
keep up. Reed does manage to have a lot of fun with the character of
the half-breed, Knox, handling him as a kind of split personality -
an educated white man with traditional values that conflict with a delusional
self-identification as a wild Indian given to scalping and rape -
although he has never done either. It's a well-written role that addresses
the schizophrenic, bifurcated white perception of Native Americans as
exemplified by the idea of the "noble savage."

Beyond the character of Knox, the script
stumbles on other important points, particularly in the areas of pacing
and jokes. Great Scout is a slow film that resorts to truly ridiculous
slapstick to get itself out of narrative jams. An early cameo appearance
by a fire hose gives us a taste of things to come.

On top of this mucky stew of undeveloped
characters and situations is a dreary layer of visual gruel that reflects
a total lack of interest in the western United States of the 1900s.
The sets and costumes look like leftovers from Petticoat Junction.
The buildings look like they could be easily collapsed at the end of
the day and stored in a warehouse someplace. There's not a shot in
the movie that looks like anyone made a single step toward any kind
of authenticity - even if that authenticity is just based on visual
cohesion. Visually, the movie is a zero.

This film is presented on DVD as a part of MGM's MOD program,
now called the "Limited Edition Collection." The DVD-R disc shows
significant signs of compression, particularly in more detailed shots.
The source quality is hard to judge due to the low-grade stock it was
shot on, but the transfer doesn't do it any favors. It's both muddy
and over-sharp, although on the plus side, some film grain is detectable.
The soundtrack is merely serviceable.

The films of the 1970s always promise
to surprise us because of the freedom afforded their makers by
the era's lack of heavy studio supervision and a more level playing
field in terms of marketing and distribution. Even an ugly mess like
The Great Scout and Cathouse Thursday has the character of Joe Knox,
portrayed with an intelligent energy by Oliver Reed, to at least make
it worth a look - but only just.