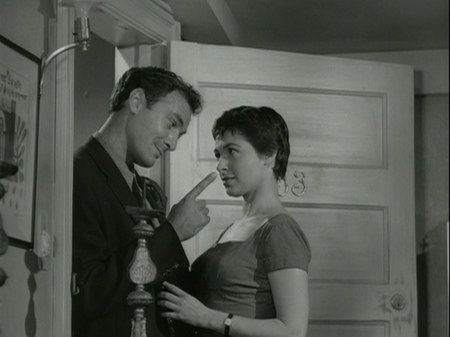 The clingy heat of a New York summer
hovers over the characters in Cop Hater with the same oppressive
quality as the paranoia that grips their Manhattan precinct as a killer
stalks its officers. Adapted by producer-director William Berke -
an extraordinarily prolific and largely forgotten specialist in low-budget
quickies - this B-grade adaptation of Ed McBain's first novel of
the 87th Precinct (a series that would span dozens of volumes
over nearly half a century) succeeds thanks to good performances and
the authenticity of its setting.

Robert Loggia plays Steve Carelli,
a detective investigating a series of cop murders with his partner Mike
Maguire (Gerald S. O'Loughlin). With few leads, the pressure mounts
as the killings continue. Carelli and Maguire's case - and their
information - is pursued by a tenacious reporter (Gene Miller), who
winds up indirectly endangering Carelli's deaf-mute bride-to-be (Ellen
Parker).

Unambitious visual choices and pragmatic
editing allow Berke to zero in on maintaining suspense and staying true
to McBain's characters. The cramped precinct rooms are sweaty with
summer heat and the palpable, top-down pressure applied by police superiors
on the detectives working the case - in addition to that applied by
their fellow cops, who are ravenous for justice as their own continue
to be hunted down on city streets.

But Berke was also plainly interested
in the exploitative aspects of filmmaking, and knew that sex and violence
sells tickets. There are a handful of scenes that might not have
made it past the censors in 1958 had this been a major studio picture
(it was released theatrically by UA). These include a sequence involving
Carelli's fiancée emerging from a shower and being threatened with
rape. Additionally, there are a handful of moderately racy moments provided
by Shirley Ballard as Maguire's aloof glam-queen wife.

Loggia is excellent, exuding great
if restrained charisma as Carelli. The supporting actors are all fine,
with O'Loughlin particularly convincing as a weary blue-collar kind
of guy (if anything, Loggia is almost too handsome for the role). Keep
an eye out for terrific early appearances by Jerry Orbach as a street
tough, and Vincent Gardenia as a hopheaded informant.

Released as an MGM "Limited Edition Collection" MOD disc,
Cop Hater's full-screen transfer doesn't look bad at all. The
black-and-white image shows good contrast. The source has to have been
in good shape already; damage is minimal and compression artifacts are
few. The mono soundtrack is not showy, but it's clear enough.

Cop Hater is enjoyable B-grade
entertainment with great atmosphere, competent direction, and good performances
by a cast that doubtless would have been underappreciated at the time
of the film's original release. Recommended.