Soldier in the Rain 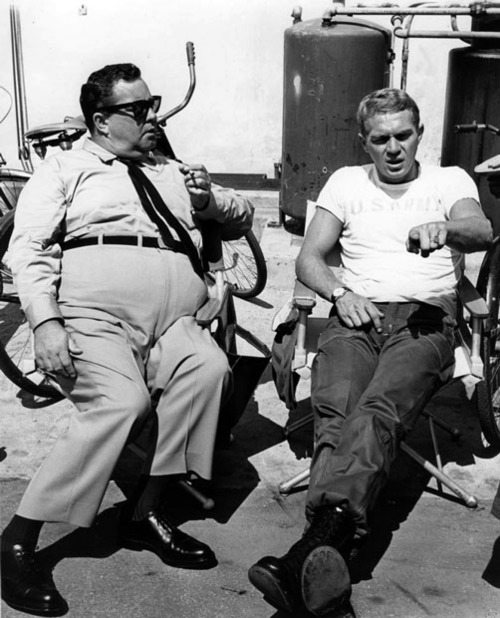 Steve McQueen was not a good comedian,
and I've always thought Jackie Gleason was more threatening than funny.
They were co-billed as the stars of 1963's Solider in the Rain,
the title of which certainly doesn't evoke smiles. Nonetheless, it
is a comedy, with a screenplay by Maurice Richlin and Blake Edwards
from an early novel by William Goldman. The movie struggles against
low production values and pat TV-friendly material that doesn't invite
either actor to inhabit their characters beyond the level of overly-familiar
types.

McQueen is supply Sergeant Eustis Clay,
a happy-go-lucky schemer in league with Master Sergeant Maxwell Slaughter
(Gleason). Slaughter lives the good life in his well-appointed peacetime
office, thanks in part to the machinations of Clay, who helps Slaughter
gain access to the newest and most sought-after goods coming through
the base. Slaughter is a career officer, but Clay, who can hardly wait
to get out of the Army, tries to lure the older man into civilian life
so they can go into business together. Slaughter regularly extracts
Clay from one jam or another, and in return, Clay sets Slaughter up
with a blonde chippy less than half his age named Bobbi Jo Pepperdine
(Tuesday Weld). However, the next time Slaughter comes to Clay's rescue,
it has unexpected consequences that lead to the film's rather mawkish
conclusion.

Tone is a problem in Soldier in
the Rain, which has dramatic pretensions that come off as forced.
But the "comedy" is problematic, too. The movie just isn't funny.
Gleason has a handful of decent moments, but I keep thinking he's
going to hit someone - which is ridiculous, because the character
he is playing is a sweetheart. McQueen is horrible - mugging idiotically
and putting on a completely made-up "hick" accent. He plays Eustis
Clay as a "dimwit," but for those of us paying attention, Clay isn't
actually that dim as written - so what's with McQueen's performance?
Watching Soldier in the Rain has made me re-assess other McQueen
roles - roles that I've never bothered giving much thought - and
I'm realizing that there may be a gross falseness to everything the
actor ever did. Even worse, however, is Tony Bill who, as the resident
goofball, tries to channel Jerry Lewis and fails spectacularly.

Soldier in the Rain could have
been a funny, acerbic take on the complacency of the US Army in the
1950s and 1960s - on the ridiculous wastefulness of the biggest and
best-armed military force in the history of the world, its men and women
spending their days daydreaming and cooking up prison-like schemes to
trade surplus mattresses for electric fans. But satirical angles are
wholly ignored; in fact, the movie takes time out to honor the military
establishment. There's nothing wrong with that, except that there's
nothing very honorable about the film's characters. They are layabouts
and scatterbrains, and they would have been more at home in a military
satire as opposed to a straight comedy.

Director Ralph Nelson adds nothing
visual to the film, shooting it as one might a live television play.
The plot moves along quickly enough (the movie only runs 87 minutes),
but there are no ups or downs - the story and tone are flat to the
extent that scenes become indistinguishable from one another in the
memory.

Coming from the wonderful Warner Archive Collection, the transfer
of Solider in the Rain represents a rare hiccup in the consistently
excellent output of this studio's MOD service. The black-and-white
image looks like it comes from a late-generation video master. The image
has that blocky video noise that makes the images looks like they've
been filtered through fuzzy Photoshop filter of some kind. It's not
a pleasing image, and it appears to be further compromised by compression
artifacts. The mono soundtrack is fine.

Solider in the Rain may be of
interest due to its unusual star pairing, but as a movie it's so insignificant
that you actually start to forget about it while it's still running.