Please Note: The images used here are promotional stills not taken from the Blu-ray edition under review. 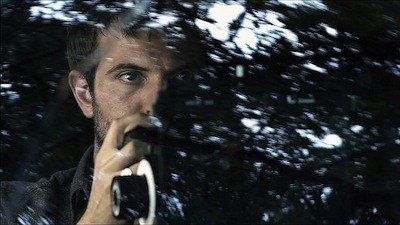 That's the last thing you see on the screen as Monte Hellman's Road to Nowhere comes to an end. As of this writing, I haven't investigated whether that is a lie or not, because I'm not convinced it really matters. Part of the point of Road to Nowhere is that you don't know, and being aware of the ruse behind Fargo didn't really change my perception of Fargo. Then again, the Coen Bros.' jokingly tricked us from the start, leading us by the nose into their clever fiction; Hellman waits until we have waded through the confusion (and all the credits) and gotten a handle on what is going down, and then he yanks the rug one last time.

Road to Nowhere opens in a sparse room where film director Mitchell Haven (Tygh Runyan) is showing his cinematic version of a recent scandal to Nathalie Post (Dominique Swain, Lolita), the internet journalist who broke the story. The film is called Road to Nowhere, and the camera zooms into the laptop screen as the credits roll over the top of what is apparently a murder and a suicide. At first I was going to describe where the story goes from there as "vertiginous," but really, it's more like an exploding firework, with lots of sparks and flames going off in various directions.

Essentially, Mitchell and his production partners want to tell the story of a politician in North Carolina who had an affair with a much younger Cuban national and possibly embezzled a significant chunk of money. Except all is not as it seems, which is what Nathalie's story is really about. Rafe Tachen (Cliff De Young) was up to some never--quite-explained shenanigans that connected him to a Cuban mover and shaker (Fabio Testi) whose daughter Velma has apparently gone missing and so they hire a young actress to fill in for her. It's this actress, Laurel Graham (Shannyn Sossamon, Wristcutters), who was having the affair with Tachen and who was either murdered or killed herself alongside him. Laurel is also the one, coincidentally, who gets hired to play Velma in Road to Nowhere after Mitchell sees the same audition reel that Tachen and the Cuban saw. They don't want Laurel to take the part, but she does anyway. Things are further complicated by the fact than an insurance fraud investigator (Waylon Payne, Walk the Line) is trying to figure out if Nathalie's claims that neither of the bodies found were Tachen or Velma are provable, and so he insinuates himself into the production. 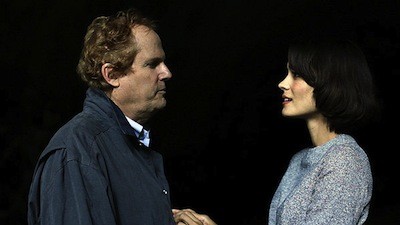 Hellman and screenwriter/producer Steven Gaydos (All Men are Mortal) are building a complicated house of cards here. Once the camera pushes into Mitchell's movie, we are never sure when it actually comes back out (if ever). The plot follows the making of Mitchell's picture, but we aren't always sure what is flashback to the "real" crime and what is a scene being re-created for the adaptation. To make it even trickier, Cliff De Young doesn't just play Tachen, he also plays the actor who is portraying Tachen. Or is he? Maybe none of the scenes with Velma's father or any of his phone calls to Laurel while she is on set are real. The line isn't clear. This could be an invention of Mitchell's screenwriter (Rob Kolar) or Nathalie or Bruno or even Mitchell himself. We even return to the original room with Mitchell and Nathalie once or twice. Did he just show her everything we just saw? If Monte Hellman knows, he's not telling.

Luckily, this cat's cradle is both pretty to look at and good fun. The guessing game inspires the viewer to think about the lines between truth and fiction, between what we consider acceptable fudging in entertainment alleged to be based on a true story and how that effects the news media as it exists today. Is maybe documentary journalism just one giant reality TV show? Nathalie, for instance, films herself watching the cut of Road to Nowhere with Mitchell. As the director works his way through the Criterion Collection and shows Laurel The Lady Eve, Spirit of the Beehive, and The Seventh Seal, he also comments on the fact that all films are elaborate dreams staged by their creators. Is Road to Nowhere his fantasy, a gnarled drama borne of his obsession with one girl? Also, what are the chosen movies meant to clue us in on?

Any resemblance between Monte Hellman and Mitchell Haven is purely intentional, right down to their initials. Mitchell was once a respected hotshot whose career has been in stasis for several years. Monte Hellman is a respected filmmaker who hasn't made a feature since 1989's inauspicious Silent Night, Deadly Night III. His best-known film is 1971's existential road picture Two-Lane Blacktop. In that movie, the highway is also believed to be without end, but there is at least some perceptible reason to keep searching, even if it's merely a fear that stopping will lead to death, be it literal or symbolic. In 2011, the road can only go so far, the accoutrements of modern life are filling up the map. In the case of the private screenings Mitchell holds for Laurel, we come in as the movies are finishing and we see their endings. Mitchell proclaims each finale to be masterful, yet he still can't figure out what Road to Nowhere's own final shot should be.

For Road to Nowhere, Hellman trades the grimy, freewheeling aesthetics of Two-Lane Blacktop for something that is ultimately more tightly controlled. Gone are the gritty asphalt and hazy sunshine, replaced by a more high-tech visual approach, one that manages to make even natural settings look cold and sterilized. Shooting digitally, DP Josep M. Civit (Asfalto) meticulously lights every scene to give it an almost plastic 21st-century surface glint. There is nary a hair out of place--even as Mitchell jokes he doesn't need to see one of Laurel's strands stick up in high-def--which is a far cry from the 1970s hippy vibe of Blacktop. It's as if Hellman is saying there are no accidents anymore, only carefully crafted stories chopped into easily digestible bites.

I suppose it's ironic then that the ending of Road to Nowhere isn't entirely satisfying. Hellman and Gaydos have cooked up a scenario straight out of a traditional film noir to cap Mitchell and his movie. It's almost like an Adaptation-style switch-up, diverting us from the unpredictable navigation that Charlie Kaufman might endorse so that we end up at a more expected destination a la his brother Donald. This concluding sequence definitely puts the brakes on what is happening, but it seems almost disconnected from everything else. One could make a case for Mitchell being taken down by his own distortions of reality, but this finish doesn't really roll back in such a way that it contextualizes what came before. It's not a bad ending, per se, it just seems more convenient than meaningful. 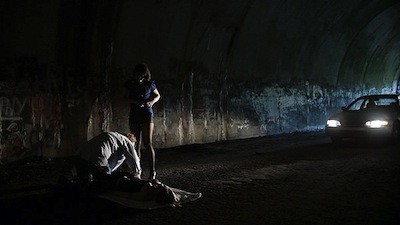 Video:
Road to Nowhere is on Blu-Ray as a 16:9 anamorphic 1080p transfer. For the majority of the movie, it looked very good, with sparkling colors and vivid details. Skin and clothing have strong visible textures, and lights and darks have an appropriate balance with only minor hints of DNR. At one point, the onscreen fake director notes how the camera clearly has a crush on Shannyn Sossamon, an assertion that high-definition only serves to prove. She is luminous.

Unfortunately, not everything else shines on the Blu-Ray. There are strange glitches in the image at times, particularly later in the movie. Once or twice, I noticed odd smudges in the frame, almost like the picture was warping (check, for instance, the hood of Nathalie's truck when she leaves the hotel for the last time). Other spots had sudden stutters and ghosting--particularly in the film's climax. As far as I know, these aren't intentional anomalies meant to further mess with our perception, so I assume these are mistakes in the digital authoring. I don't want to overstate the case, I barely need all the fingers one hand to count the bugaboos I spied, but they are there and they can be distracting.

Sound:
Two audio options are offered: a 2.0 stereo mix and another in 5.1 Master Audio. The multi-channel choice offers lots of atmosphere, with exceptionally clear tones and excellent volume levels. Dialogue is easy to hear and there are nicely placed sound effects throughout. Silence is also used effectively. The movie went so quiet in the first five minutes, I jumped in my chair at two different instances of surprising sound cues.

Extras:
There are three extras on the BD of Road to Nowhere, counting the film's theatrical trailer (and not counting the other trailers). One is on the DVD edition, as well, a Q&A from the Nashville Film Festival that runs about 14 minutes and doubles as an award ceremony for Hellman. The other is exclusive to Blu-Ray, and it's a near 15-minute interview with Shannyn Sossamon about her involvement with the movie.

The packaging also promises the behind-the-scenes featurette that was on the DVD, but damned if I see it on the actual menu. Anyone spot it?

FINAL THOUGHTS:
The latest from Monte Hellman is a solid examination of motion picture making, truth telling, and the mix of fact and fiction that permeates modern media. Road to Nowhere effectively works its movie-within-a-movie device, shuffling up the greater narrative to create an enigmatic, compelling cinematic mystery. It doesn't add up to an entirely great film, but it is one that never grows dull, a pulpy fiction put together with the cult director's usual eye for character detail and a pleasing visual aesthetic. Recommended. 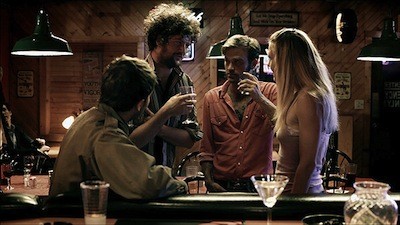