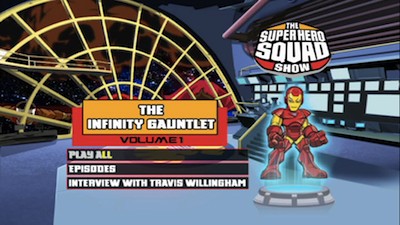 Okay, so maybe I should have done my research before I started watching The Super Hero Squad Show: The Infinity Gauntlet Vol. 1, because had I done so, maybe I wouldn't have been so baffled by what I was watching. This first entry in collecting the animated television show's second season is also my first exposure to the series. I had heard of it and seen images from the program. Judging by the superdeformed look of the otherwise familiar-looking Marvel Comics characters, I had appropriately guessed that the cartoon was aimed at younger audiences. What I hadn't guessed was how deep into comedy it would go.

The Super Hero Squad Show: The Infinity Gauntlet Vol. 1 gathers the first seven episodes of a 26-episode season. As comics fans familiar with the "Infinity Gauntlet" title have likely figured out, the overall plot of the cycle will feature the villain Thanos seeking the six stones of the Infinity Gauntlet, a powerful cosmic weapon. Opposing him will be the titular Super Hero Squad, which is made up of goofball takes on Iron Man, Thor, Falcon, Wolverine, Hulk, Ms. Marvel, original character Reptil, Scarlet Witch, and sometimes Captain America. While the first two shows focus specifically on the Thanos plot, other episodes detour into one-off excursions. For instance, "World War Witch!" takes the heroes back in time to when Cap was fighting the Red Skull alongside the Invaders in WWII, while "Support Your Local Sky-Father!" pits Olympus vs. Asgard, and it features the Marvel Universe rendition of Hercules.

The show strives for a fun adventure tone, and though the writers strive to include jokes that might appeal to adults, most of those are inside references to Marvel Comics and other pop culture ephemera. Something like the title of "Whom Continuity Would Destroy!" will probably only make sense to comic book nerds, who also will be equally excited by the appearance of the Squadron Supreme and find it amusing that Adam West has been cast to do the voice of Batman rip-off Nighthawk. These things will mostly go over younger viewers' heads, but that should be okay. Most of the rest of the cartoon is geared towards them, and as an adult, I could appreciate the energy and the action, but I was largely bored.

A big reason for that is I find the animation in The Super Hero Squad show unappealing. The drawing is clean and attractive, but the limited flash animation style strikes me as cheap. Also, the squished, exaggerated appearance of the characters doesn't really work for me. I guess Super Hero Squad was a toyline before it was a cartoon, comic, and video game, so the producers are mimicking the appearance of the small plastic figures. Can you say "brand synergy," boys and girls?

What it boils down to is The Super Hero Squad Show: The Infinity Gauntlet Vol. 1 didn't work for me, nor was it necessary intended to. It's meant to get youngsters excited about Marvel super heroes, and while I think elementary school-aged kids will probably dig the fast-paced, poppy tone of the series. These aren't their parents' versions of the popular characters--their personalities are as exaggerated and simplified as their outward appearance; there is a lot of scatological humor, as well as a preponderance of gags about how dumb Hulk and Thor are--but I guess they are fine for now. There will be plenty of material with the more serious incarnations of the same larger-than-life entities waiting for today's youth when they are ready to move on. 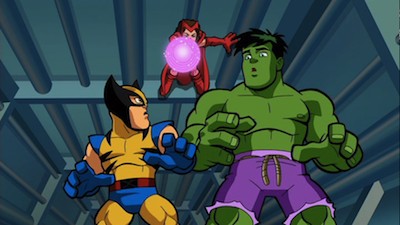 There are seven twenty-two minute episodes on The Super Hero Squad Show: The Infinity Gauntlet Vol. 1 DVD, and they are as follows:

* "Another Order of Evil, Part 1/Part 2": The two-part opening setting up the season and the plot with Thanos.
* "World War Witch!": An adventure back in time.
* "Villainy Redux Syndrome!": Catching up with Dr. Doom in prison.
* "Support Your Local Sky-Father!": A rumble between the Norse gods and the Greek gods.
* "Whom Continuity Would Destroy!": Thanos and Grandmaster pit Hulk, Iron Man, and Scarlet Witch against members of the Squadron Supreme.
* "Double Negation at the World's End!" Wolverine vs. Annihilus in the Negative Zone. 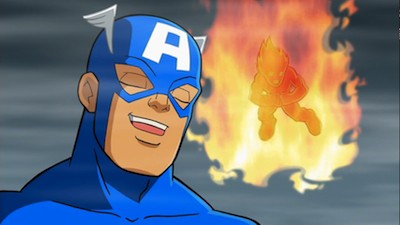 Video:
The cartoons on The Super Hero Squad Show: The Infinity Gauntlet Vol. 1 are shown in widescreen, their original broadcast format. Colors look good, but resolution is sketchy. There is some definite interlacing visible, creating jagged edges in addition to the already pixilated look of some of the digital animation. Fans of classic cartoons likely won't be too knocked out by what they see here, in all honesty, but it serves its function otherwise.

Sound:
The original audio is mixed in stereo and there is some good two-channel interaction. Solid volume level, good clarity. English Closed Captioning is also an option.

Extras:
A promo interview with voice actor Travis Willingham (the Hulk and the Human Torch), clocking in under two-minutes.

FINAL THOUGHTS:
Rent It if you've got younger kids in the house. They should find this action-packed, comedic take on Marvel super heroes entertaining. Older viewers may find The Super Hero Squad Show: The Infinity Gauntlet Vol. 1 a little less than scintillating in both departments, and fans of the comic book characters could be turned off by their cartoony renditions. It's a case of knowing the audience it is intended for, and where you fit in it. 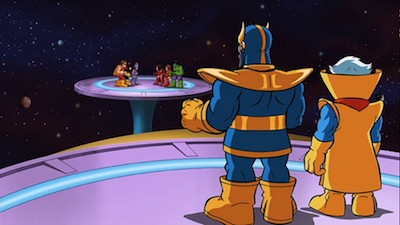