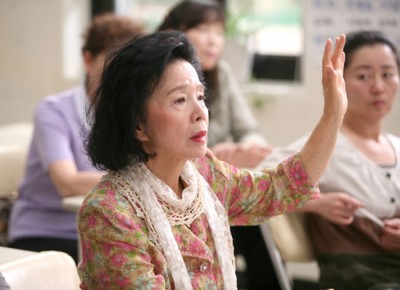 Please Note: The images below are promotional stills taken from the film and are not representative of the Blu-ray disc under review.

Life has no good reason to be unkind to Mija (Jeong-hie Yun), the unlikely heroine of Chong-Dong Lee's Poetry. A petite, selfless, perpetually smiling grandmother who, as she gigglingly admits, enjoys simple pleasures like flowers and "dressing up," Mija does not even seem physically equipped to face life's harsher side, let alone emotionally or attitudinally grounded. Yet the subtle, clear-eyed way in which director Lee (Secret Sunshine) and actress Yun depict the quiet strength of Mija's sensitivity in the face of an overwhelming barrage of uninvited pain and trouble suggests that there are ways of rising above the unfairness of life, even at its most grinding, and even for the most vulnerable or seemingly unprepared among us.

The first of the curveballs thrown Mija's way comes when, during the course of a relatively routine medical checkup, she is incidentally given the harsh diagnosis of encroaching Alzheimer's disease. As she dazedly leaves the medical center, she witnesses the uncontrollable grief of a mother whose daughter's body lies covered on a nearby stretcher. The girl has committed suicide (we have seen her drowned body floating to the surface under the opening credits), and the mother's railing against the cruelty of the universe is applicable enough to Mija's newfound, unwelcome knowledge about her own condition; little does she know how directly she will be affected by the tragedy of the woman's drowned daughter . Her teenaged grandson, Wook (Da-wit Lee), whom she is raising in his mother's absence, has been an active part of the torment that drove the girl, Agnes, to kill herself; he and his buddies have subjected her to ongoing, ultimately unbearable degradation by coercing and harassing her into granting them sexual favors. Compounding Mija's disappointment with her adored, coddled Wook (the way she dotes on him goes a long way toward explaining his spoiled, sullen, entitled attitude) are Wook's pals' fathers, who are pooling their money in order to settle with Agnes's mother, paying her off to keep the police uninvolved and the boys safe from being brought to justice for their crime. Mija is expected to contribute a large sum that she does not have; she lives off her pension and part-time work as a maid/caretaker for a partially disabled, wealthy older man, and she cannot even afford the new cell phone Wook demands from her. 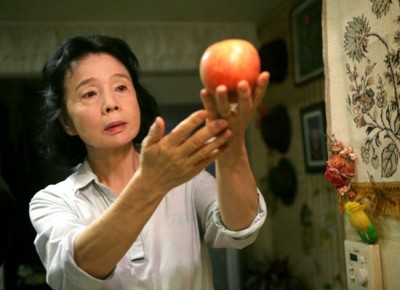 It is a matter of course for Mija not to burden anyone in her life with her diagnosis; she is a giver, not a taker, always willingly offering her frail shoulders for anyone to rest their burden upon, and she even has difficulty mustering the assertiveness with which to confront Wook about his devastating malfeasance. Based on a whim and a 50-year-old compliment from a third-grade teacher who noticed her penchant for admiring flowers and making "odd" observations, Mija allows herself one thing exclusively in her own interest: she joins a community-college poetry-writing course--the casual, life-enrichment sort of class offered for the purpose of bringing common folk in touch with artistic transcendence. Though she cannot realize it, and never consciously articulates it, it is her sometimes frustrating, discouraging attempt to complete the assignment of writing a poem for this undemanding class that puts her on the path toward some clarity and strength, letting her empathy for and guilt over Agnes come to the surface and allowing her to see in herself the grace and lucidity with which she will finally, very unassumingly and quietly but with immovable resolution, face the illness, disappointment, and guilt that threaten to drag her under. 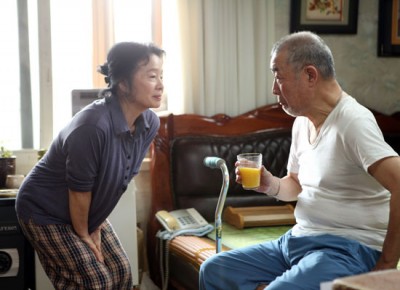 The film has no apparent special effects, showy editing, or acrobatic camera moves, but it is technically very assured and superbly controlled. The world Mija lives in is full of corruption, lowness, and self-centered manipulations, but the way Lee and cinematographers Kim Hyun Seok and Kim Bada have rendered it for us, it is not at all grim. There are so many ameliorations and compensations that are so real and tangible in the film's golden, autumnal light: the way the sun shines through the leaves of trees, the perfect ripeness of an apricot, or the majestic mountains and water that surround the nondescript, out-of-the-way town Mija calls home. With the aid of editor Kim Hyun, Lee finds a way of both reinforcing the possibility of poetic transcendence for Mija and extending it outward to include any other "ordinary" person; on several occasions, he takes us back to a medium-shot, near-vérité, individual-interview-style scene of each of Mija's classmates in which they face the class/camera and speak--shyly, nervously, honestly, movingly--about their "most beautiful moment," and their ability to transform such a hackneyed classroom exercise into something personal and beautiful suggests that each one of them, all their feelings and experiences, would be as worthy of their own film as they are of trying their hand at poetry. The film has no score, but the sound design by Lee Seung-Chul (following in the venerable footsteps of that acute, almost exclusively diegetic use of sound exemplified by Bresson, the Dardennes, and Michael Haneke) is alive with the ambient noises of each scene. As Mija's teacher tells her, poetry starts with being open, observant, and sensitive, and what we see and hear in Poetry offers a perfect aural and visual analogue to that truism. 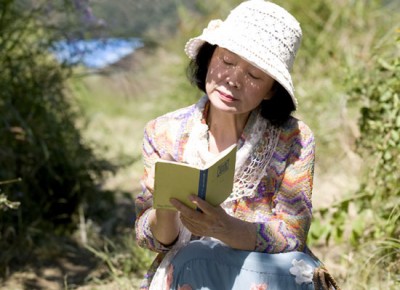 Mija's emotional journey, as scripted by Lee and perfectly played by Yun, is one whose steps are never obvious, and the fact that she is even responding so deeply to her search for the stuff of poetry is not made any more emphatically obvious to us than she is likely consciously articulating it to herself as she experiences it. There is a truly fine subtlety to the way Lee shows Mija's development. As in Caroline Bottaro's Queen to Play, we have a troubled heroine whose life will be changed in an unexpectedly deep way by what appears to be a minor, desultory hobby, but like Bottaro, Lee never makes the mistake of overplaying his hand, and so the revelation of poetry in Mija's life is never announced as such, and there is no Big Moment wherein it is revealed that poetry will change Mija's life; the change unfolds before our very eyes. Lee is a cinematic storyteller of wisdom and integrity, and he is cognizant of the impossibility of anything, let alone something as intangible as art or poetry, Making Everything Better. Consequently, his and Yun's depiction of Mija's transformation is thoughtfully measured, proportionate to and very respectful of the ongoing knottiness of life and the nonexistence of all-encompassing solutions or easy answers. In thus refusing any overdetermined, everything's-fine resolutions, Poetry honors the audience's intelligence and makes an actually convincing, hopeful case for the possibility of inspiration and branching out beyond one's comfort zone. It is through all the small moments and seemingly casual actions and interactions that Lee's serene, masterful structure of accretion works to the make the film itself, in its entirety--rather than any forced, obvious climaxes or realizations--the epiphany.


Every gradation of light, shadow, and color in Poetry's subdued but carefully composed and glowing images is present and accounted for on this lustrous, brilliant Blu-ray edition, which has been encoded with AVC at 1920x1080p and is presented anamorphically at its original theatrical aspect ratio of 1.85:1.


There are no huge sonic moments or even music in Poetry, but as mentioned above, sound designer Lee Seung-Chul's ambient soundscapes are crucial to the film's contemplatively naturalistic tone, and this Blu-ray edition's excellent DTS-HD Master Audio soundtrack (in the original Korean with optional English subtitles) conveys with rich, clear fidelity the film's meticulous use of surround-sound attributes, making the home viewer feel as if he or she is actually present along with the characters in the film's various interiors and exteriors.


A brief, impressionistic making-of documentary demonstrates the focus and physical alacrity that were required of Jeong-hie Yun, who plays Mija and is in virtually every scene; interspresed throughout are interviews with Yun and director Lee Chang-Dong discussing the character of Mija. In an interesting additional snippet, an off-the-cuff interview with supporting actor Ahn Nae-sang (who plays one of the fathers of Wook's comrades), he discusses the intimidating privilege of working with Yun, further enforcing for those of us previously unfamiliar with her work the actress's towering stature in Korean cinema. Rounding out the supplements are a gallery of evocative stills, as well as Kino's U.S. trailer for Poetry and several of its other foreign releases.


Lee Chong-Dang's Poetry gives us a long, deep, immensely moving look at the way in which Mija, a seemingly ordinary woman, manages to cope, without any great ostentation or massive, obvious sea-change in her attitudes or behaviors, when she is inundated with the disappointment inflicted upon her by those she loves most and the impending betrayal of her own physical and mental state. This is not escapist or grandiose fare meant to uplift us through its protagonist's victimhood, martyrdom, or extraordinary triumph. It is a celebration, serenely confident in its every narrative, performative, and technical aspect, of how human beings, like the flowers beloved by Mija, can retain their fragile yet resilient beauty and manage to flourish in life's roughest, least hospitable patches. Highly Recommended.