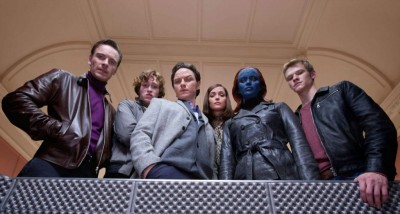 Prequels are a dicey proposition, and most make it unnecessarily hard on themselves by trying to exhaustively satisfy a fan base that's already an easy lay. "X-Men: First Class" is a feisty prequel effort, effectively restoring badly needed snap into the mutant franchise, breaking away from Wolverine to fiddle with a colorful community of heroes and villains. It's also ludicrous beyond belief at times, madly searching for ways to establish connections between this origin tale and the four films that technically follow it. "First Class" works too hard to be clever, when all anyone is truly asking for is a restoration of the group dynamic that made the earlier pictures exciting and expansive.

Tortured in a Nazi concentration camp during WWII, Erik Lehnsherr/Magneto (Michael Fassbender, forceful but underused) has matured into a killing machine, on the hunt for his diabolical captor, Sebastian Shaw (Kevin Bacon). Professor Charles Xavier (a charming James McAvoy) is a powerful telepath and a swinging bachelor, looking to put his gifts to proper use with the help of his associate, Raven Darkholme/Mystique (Jennifer Lawrence). When Shaw and his team of mutants, including diamond-skinned Emma Frost (a comatose January Jones), organize a master plan to initiate WWIII off the shores of Cuba, the C.I.A., including Moira MacTaggert (Rose Byrne), reaches out to Charles, who assembles a squad of young mutants to help bring down Shaw. Training his adolescent outcasts while nurturing a tentative friendship with a frustrated Erik, Charles forms his "X-Men," setting off to save a world clearly disturbed by this show of mutant force. 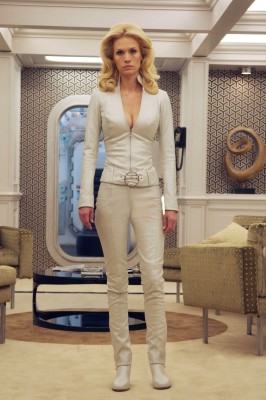 Perhaps the most satisfying feeling "First Class" offers is the return of the mutant squad, a team commotion solidified brilliantly in Bryan Singer's "X2: X-Men United." Singer returns here to nab producer and story credits, and his influence is felt all through the production, which welcomes a restart of the franchise by dialing back the clock to 1962, infusing the film with a cold war feel and a retro vibe, illustrating the mutant reveal while world politics head to the brink of global destruction.

The director here is Matthew Vaughn, who recently worked out a different set of comic book muscles with his disappointing comedy, "Kick-Ass." "First Class" offers a more reflective opportunity for the filmmaker, who approaches the material with an eye for mutant melodrama, exploring the discomfort of these characters as they're revealed to the world, exposing their secrets to those who judge harshly. Continuing the outsider theme of "X2," "First Class" takes great pains to establish the mutants as vulnerable souls, unsure of themselves, looking to Charles for guidance and wisdom, imbued with a sense of purpose from a caring man. Scenes of self-discovery are played broadly, but Vaughn retains the mournful essence of the "X-Men" experience, sustaining an intimacy with the ensemble and their private desires, building a thrilling lift hill of gradual acceptance before the blockbuster theatrics kick in.

Instead of playing sleek, "First Class" is thrust into a pop world of 1960's architecture and costuming, with period ornamentation providing an unusual personality to the picture, massaged well by Vaughn and his gifted crew. The film retains a lively visual design, which extends to the new group of mutants, including Zoe Kravitz as Angel Salvadore, Jason Flemyng as the demonic Azazel, and Caleb Landry Jones as Sean Cassidy/Banshee. Vaughn makes the most out of the gang, keeping displays of power and training montages in constant rotation, boosted by impressive special effects and competent performances, producing an atmosphere of varied personalities and striking powers, padding the widescreen space with a host of testy mutants learning to control themselves on the eve of war. The score from Henry Jackman lacks a proper hero theme to send the activities soaring, but the cast is quite energetic, with special attention to Nicholas Hoult, who makes a fine impression as budding mutant scientist (and creator of Cerebro), Hank McCoy/Beast. 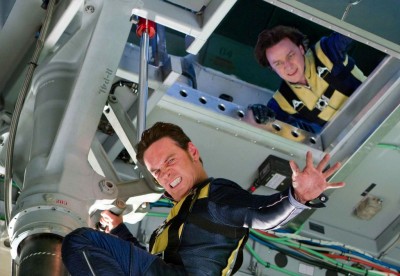 What's unexpected about "First Class" is how prequely it becomes, with the script dashing back and forth to create connections to the established storyline. The picture has an intriguing plot that's best played on its own, with little touches of foreshadowing placed into the corners of the frame. Instead, "First Class" bends over backwards to remind viewers of everything that's about to come, with Charles making bald jokes and Raven abruptly showing sexual attraction to Erik despite a clearly pronounced romantic development with Hank. The presentation of Magneto's helmet and the introduction of Charles's mansion as the X-Men safe haven is one thing, but do we need to see how the future Professor X loses his ability to walk? Is it crucial to witness the origin of the mutant code names? Must Charles and Erik have their dividing row immediately? "First Class" rushes the details or plays cutesy with them, cramming the essentials into a single picture instead of spreading the inside references around, building conflict over sequels to come in what looks to be a new start for the "X-Men" franchise. The absurdity is piled too high at times by Vaughn, who seems eager to please, though it often dilutes the feature's dignity.

"First Class" is sure to please younger audiences and comic book believers, while the rest should also be heartily entertained. It's a solid "X-Men" adventure with the fresh take on superhero concerns, but it also feels rushed, racing to hammer in its position as the first film of the saga, often forgetting to kick back and simply enjoy the vast mutant view.