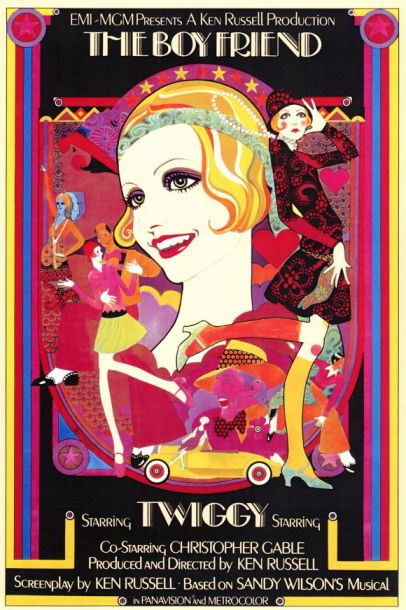 The Boy Friend
is equal parts throwback and time capsule - an homage to the great
Warner Brothers musicals of the 1930s choreographed by the legendary
Busby Berkeley, and a record of an era in filmmaking (1971 to be precise)
that fostered experimentation beyond the traditions of the Golden Age
studio system - even at major studios such as Warner Brothers, which
financed and distributed Ken Russell's adaptation of Sandy Wilson's
smash Broadway musical.

Twiggy, fashion icon of the 1960s,
stars as Polly, the assistant stage manager at a second-rate theater
in an English seaside town. The troupe is in the midst of its run of
"The Boy Friend," except that it is short its leading lady,
who has recently been injured. So, Polly is thrown in as a last-minute
replacement by the troupe's ambitious director (Max Adrian), out to
impress the visiting Hollywood director De Thrill. The performance goes
on, with Polly gamely struggling to keep up and ultimately stealing
the show by virtue of sheer unpracticed charm. Her convincing performance
is aided immeasurably by her real crush on the male lead, Tony (Christopher
Gable), whose level of reciprocation appears to be ambivalent throughout.

Russell's conception of the whole
is as a play-within-a-movie, an old-fashioned Hollywood musical with
fantasy-like dance numbers that extend well beyond the world of the
film's setting. In sequences that rhapsodically depart from the creaky
stage of the troupe's run-down theater, dancers perform as dice, as
the characters on playing cards, as mushroom-dwelling forest gnomes,
as Classical libertines, and as bits of kaleidoscopic glass that move
upon gigantic revolving turntables. These numbers are made whole thanks
to show-stopping music (Wilson's score was ably adapted and supplemented
by Peter Maxwell Davies) and infectious, energetic choreography and
dancing. The Boy Friend is easily the best Busby Berkeley musical
that Berkeley never made.

Taking their cue from silent cinema
as well as Hollywood musicals of yore, the cast hams it up appropriately.
Gable is toothy and a touch too pretty as Tony. Adrian is anxious and
greasy as the director Max. Glenda Jackson appears in a wonderfully
modulated cameo as the injured leading lady, letting Polly know she'll
never measure up, only to follow that with restrained encouragement.
Tommy Tune has a featured role as a predictably dance-savvy cast member.
As Polly, Twiggy embodies some of the same qualities that made her so
influential in fashion - quiet humility, innocence, and easy, effortless
charm - something like a female Oliver Twist.

Russell is known as an excessive director,
and although The Boy Friend is never excessive in its content,
it is rather long. I suspect a judicious editor could easily shed 20
or more of the movie's 138 minutes and not harm the film's narrative
flow or spectacular dance sequences. Still, that is the only real
caveat I can think of. The Boy Friend is old-fashioned filmmaking
that captures a classic feel while pushing the cinematic form of the
musical forward in ways that still look clever forty years later.

From the Warner Archive Collection, The Boy Friend arrives
on DVD (for the first time) in a remastered transfer that looks good,
if not perfect. A grubby-looking movie by design, the transfer certainly
shows good fidelity and contrast. Colors look particularly good during
musical sequences, in contrast to the more drab "real world" the
film inhabits. Russell's widescreen film (photographed by David Watkin)
generally looks quite good. The stereo soundtrack holds up well, too.
It's expansive without being that dynamically immersive. Most importantly,
the music sounds good.

Bonus features are rare on MOD titles, so it's nice that Warner has
included a vintage promotional featurette that runs about eight minutes.
It's got some interesting behind-the-scenes footage of Russell directing,
and includes interviews with many of the principals.

The Boy Friend holds up well
as an impressively mounted and consistently entertaining musical, buoyed
by the charming lead presence of Twiggy. An energetic cast and terrific
musical numbers make up for the overlong running time. Recommended.