Other // Unrated // August 30, 2011
List Price: $29.98 [Buy now and save at Amazon]
Review by Stuart Galbraith IV | posted September 15, 2011 | E-mail the Author
Detroit just can't catch a break. Since the Twelfth Street race riot of 1967 and the white flight to cookie-cutter suburbia in the years that followed, once-proud Motown has taken beating after beating after beating. The fifth most-populated city in America in 1950 with an ethnically diverse 1.8 million, Detroit shrunk to a mere 713,777 people by 2011. Block after block of beautiful downtown buildings built earlier in the 20th century and often gorgeous, ornately appointed homes lie vacant and crumbling. Where even a tiny, older old house in Southern California can cost upwards of $500,000 and up, in some neighborhoods of Detroit you can buy a large two-story home and the land it sits on for $50 (not a typo).

Since the days of popular but controversial mayor Coleman Young there've been endless predictions and promises of a major comeback, but it's been three steps back for every step forward. And now, adding insult to injury: along comes a television police procedural series set and filmed on location in Detroit, a superb show in which the city's heartbreaks and indefatigable spirit against overwhelming odds - all central to the show's appeal - explores but never exploits Detroit's open wounds on primetime television. It slowly but surely builds a devoted following of fans and critical acclaim ... and is unceremoniously cancelled after just 18 immensely compelling episodes.

Detroit 1-8-7: The Complete First Season (2010-11) now comes to DVD, and via the newfound fans it'll surely find on home video maybe, just maybe, there will be an outcry loud enough that it might yet continue on, perhaps on a cable network like HBO (once home to the similarly appealing The Wire) or AMC. 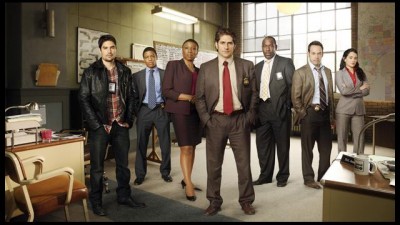 Detroit 1-8-7 is an ensemble piece, a one-hour program about a downtown homicide unit, with episodes typically alternating between two investigations. Its creators originally had something entirely different in mind, a Cops-style mockumentary that apparently was to alternate between raw video footage supposedly shot by an unseen camera crew (also as in The Office) with 35mm, single-camera material filmed in the usual cop-drama manner. The series pilot was made not in Detroit but Atlanta, apparently with only a few establishing shots filmed in Michigan. (Subsequent episodes were filmed in Detroit.)

However, the mockmentary approach was quickly scrapped and the pilot episode was partially reshot to compensate for its lost. Additionally, making the city itself central to the drama seems to have evolved soon after. The very title of the show, for instance, refers to California's penal code number (1-8-7) for homicide and not Detroit's, which is 750. In the pilot one character refers to a "soda" rather than "pop," the regional jargon. It was a mistake quickly picked up by the local press and which the filmmakers were careful not to repeat.

Stylistically, Detroit 1-8-7 is like every other cop drama though its cast is refreshingly weighted toward non-whites, both which may have hurt its chances in white Middle America. Det. Louis Fitch (The Sopranos' Michael Imperioli), the star-by-default, is an enigmatic loose cannon, whose rule breaking is tolerated because it's balanced with extraordinary results. His partner is rookie detective Damon Washington (Jon Michael Hill), a married young man with a demanding wife and, by the end of the pilot episode, a newborn son. A clever running gag in the show's early episodes is Washington's unwillingness to turn off his constantly-ringing, intensely-annoying cell phone, which always goes off at inopportune moments, like in the middle of a death notification.

Detroit 1-8-7 is shot in the usual manner, in a cinematographic style dating back to the days of Hill Street Blues and NYPD Blue: shaky hand-held camerawork, a gritty, semi-documentary style. Similarly, the scripts aren't all that different from what audiences have seen before on those shows as well as innumerable episodes of Law & Order, and Homicide: Life on the Street. These aren't complaints.

Rather, Detroit 1-8-7 fascinates in its use of setting. Most cop shows are set and filmed in New York or Los Angeles, and when they are set somewhere else, from The Streets of San Francisco to CSI: Miami, they're almost always picture postcard idealizations with little attempt to understand the city or its people.

Detroit 1-8-7, on the other hand, has Detroit pulsing through its veins. You can almost smell the kabobs in Greektown, the mold and mildew of abandoned homes on Grand River Avenue. Executive producer David Zabel stated, "There's a lot of opportunity to see what's positive in the city and see what's heroic about the people fighting for what's best for the city of Detroit." And that's exactly what's onscreen: the desperately poor looking for ways out, of opportunistic modern-day carpetbagger-developers trying to cash in on its bargain-basement real esate, of once-gorgeous movie palaces converted into weird, indoor parking structures, of chases through ghost town neighborhoods, and empty lots in the middle of downtown transformed into small farms. In a sense, it might be a drama about a future America, with an obliterated middle-class reduced to poverty and trying to pick up the pieces.

The ensemble cast is excellent, and to their great credit, none of them come off as transplanted New Yorkers or LA actors. Despite his Italian-American roots, star Imperioli's Fitch is especially authentic, looking just like the Polish, Ukrainian, and other Eastern European immigrant neighbors I remember growing up with in nearby Livonia.

A Lionsgate release, Detroit 1-8-7 is presented on four single-sided, dual-layered discs in 16:9 enhanced widescreen, in 1.78:1 format. The Region 1 discs run a total of 792 minutes, or 13.2 hours. The image is up to contemporary standards for a show like this and it has strong 5.1 Dolby Digital audio, with optional closed-captioning (English only). There are no Extra Features.

This a a really strong series that deserves a second life on cable. If you haven't seen it yet, Detroit 1-8-7 comes Highly Recommended.