Thus concludes my review of "Mystery Science Theater 3000- Manos: The Hands of Fate."


Seriously though, if that doesn't make you laugh/puzzled/fearful, then this iconic, if not historical episode of "Mystery Science Theater 3000" is not for you. But...if strange goat-men whose stilted walks are accompanied by the most haunting music committed to celluloid sound appealing, then the treasures/horrors that away you as Joel and the Bots experience "Manos: The Hands of Fate" (or its English translation "Hands: The Hands of Fate") is bound to reward with laughs, confusion and more laughs. 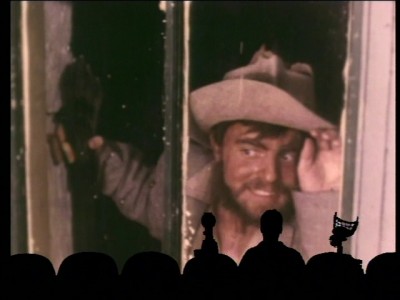 At this point in TV/film history "Manos" is the punch line to a joke and might be known to more than who've actually seen the MST3K skewering of it, let alone the film in its uncut, slower than molasses 74-minute form. An incomprehensible, no budget disaster from the mind of Hal Warren (former fertilizer salesman turned writer/director/actor/ADR talent), "Manos" begins with the longest, most aimless driving montage before finally arriving at what is assumed to be another plane of existence, depicted as shabby house in the desert, owned by the Master (introduced in a terrible oil painting) and looked over by the Satyr/pervert/comic relief, Torgo. Followed by a haunting repetitive theme as he staggers across camera, Torgo warns Michael (Warren himself) that he shouldn't stay the night all while happily carrying the bags of Michael's wife, small daughter, and poodle into the very house he says they can't enter.


Even as I write the above, I find my words make no sense, because, frankly, nothing about "Manos" makes sense. Case in point, the film continually comes back to brief interludes with two alcohol swilling and necking teenagers in a car, who are constantly interrupted by an ineffective sheriff. What great plot purpose does this hold? Well, as revealed in the bonus features by the co-star of the film, the scenes were only added because the actress in the car injured her leg and couldn't be utilized in a later more "vital" scene. "Manos" is essentially a series of vague scene ideas haphazardly cobbled together in chronological fashion. 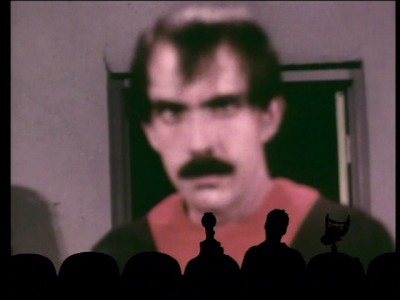 Luckily for us, Joel and the Bots are there to ease our pain, tackling "Manos" after warming up with the second part of a Jam Handy produced corporate training film plainly titled "Hired!" While I would never call "Manos" the funniest MST3K outing (I'd reserve that for "Mitchell!" and "The Final Sacrifice"), it is incredibly unique in the way it transcends the standard "riffing" formula and not long into the feature, Joel, Crow, and Tom Servo feel like comrades in misery, vocalizing your own thoughts and fears, while still managing to keep the mood light with the astonishing pop culture references you come to expect. Much fun is had at the expense of the late John Reynolds who embodied the episode's most lasting legacy, Torgo. Reynolds is a bizarre force of nature, barely able to keep himself upright, which was later to be revealed a result of him wearing the prosthetic leg pieces backwards. If his walk and haunting theme (a phrase bestowed by the show) weren't enough, Reynolds easily steals the show through the simple stage direction of peeping through a window. The boys express equal levels of repulsion and bemusement at something that makes no sense, serves no critical story purpose, and is ultimately easily confused for some sort of sick anti-comedy. As "Manos" lingers, you can practically feel how worn out the guys are, desperately trying to make sense of nonsense before eventually expressing sheer fear that maybe "Manos" is a "snuff film." The crown jewel on the whole affair is "Manos'" final shot that even to this seasoned filmgoer while not explicit in anyway is the film's one genuinely unsettling, nearly offensive moment and firmly cements the legacy of the film (of which the definition is being stretched) as equal parts enigma and refuse.


The true (intentional) comedy gold comes from the host segments, which get progressively sillier and are welcome breaks in the insanity. As always, everyone involved is having a blast, most notably in the final segment where Crow and Tom Servo recreate the scantily clad assault sequence from the film and Joel introduces the ultimate spoof, Torgo's Pizza. As a hat tip to the audience for enduring a truly dreadful film, Frank actually apologizes for the film at one point a true rarity in the show's history and confirmation (for the umpteenth time) that "Manos" sucks. Thankfully, as always MST3K doesn't and as a result far more people in the world know the name Torgo than should. 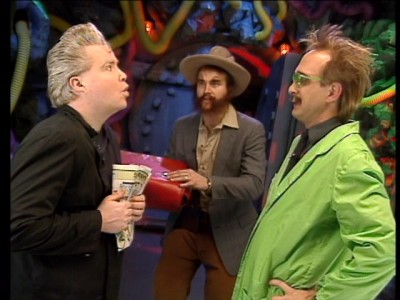 
The 1.33:1 original aspect ratio transfer (of both the show and source film) is much better than I can recall MST3K looking on TV. There's a bit of color bleeding and a few artifacts from the video source footage, but a lot of the charm of the show was the low budget look and the DVD reproduces it quite nicely. "Manos" however is ugly, featuring minimal detail, heavy print damage and a dirty brown tinge to the image. The "no budget" production values shine through and it's probably a miracle as ugly as this transfer looks that it's not worse.


The Dolby Digital English stereo audio track captures the essence of the show as well as one could expect. Host segments and the riffing itself are clear and properly mixed with the source film. The source film however suffers from poor audio (a problem confirmed by Bernie Rosenblum to be present at the film's theatrical premiere) and is best described with the terms muffled and hollow.


Disc One starts off strong with "Group Therapy" a lengthy extended interview/grief meeting featuring Joel, Trace, Frank, and Mary Jo reminiscing over the origins of "Manos." Following that, the intro and outros for the "Manos" episode of the syndicated "Mystery Science Theater Hour" episodes are included.


Disc Two is the real treasure trove, beginning with the feature length "Manos: The Hands of Fate" in its uncut, rambling, visually ugly glory. "Hotel Torgo" is easily the most fascinating feature on the disc, produced by two Canadian film students in 2004, it gets one of the last surviving members of the cast and crew, Bernie Rosenblum (he was the constantly drinking teenager in the car in the film and a key grip amongst other duties behind the camera) to tell the story that was "Manos". At times sad, but often humorous, "Hotel Torgo" confirms just how misguided Hal Warren was and gives viewers a look at some of the infamous filming locations today. The filmmakers initially tried some "Manos"-esque frame jumps in the first five minutes, but quickly abandons the gimmick for a straightforward object approach for the remainder of the roughly 30-mintue runtime.


Jam Handy, the man behind the "Hired" short is paid tribute to in the 30-minute faux film "Jam Handy to the Rescue" (created by "Lost Skeleton of Cadavra" genius, Larry Blamire) as well as "My (Educational) Short Life" which gathers Handy fanatic Joel Hodgson for a sit down interview. An archival Handy TV spot and bloopers from "Jam Handy to the Rescue" are included. Last but not least "Hired" is presented as one complete extended session with Joel and the Bots."

"Manos: The Hands of Fate" is truly a terrible movie that even stretches Joel and the Bots' ability to mock the baffling disaster of a production. Torgo aside, it's an exercise in tedium and is the longest 74-minutes you'll ever endure. Yet, a lot of the fun in this particular entry in the MST3K canon is feeling everyone's pain at this awful, awful pile of excrement. The host segments are all top notch, finally succumbing to the acceptance that no one will ever fully "understand" "Manos" and Torgo and his haunting walking music are comedy gold on their own. For fans of "Manos" (yes, some exist) and/or MST3K this is THE definitive release, providing fans with plenty of bonus features, the uncut film, and likely the best audio/visual quality one could expect from the show and the source film itself. A must own disc, even if you have the previous release. DVD Talk Collector Series.