Cigarette Girl of Mosselprom, The 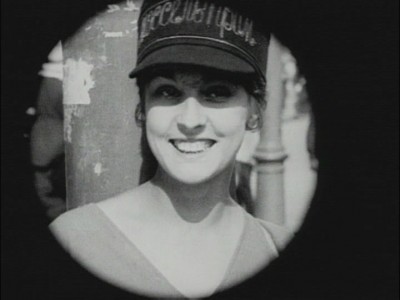 Call it a leftover, unconscious Cold War prejudice, but for me, the phrase "funny, cute, lighthearted Russian film" does not immediately compute. Tarkovsky? A world-class genius, but not really funny. Eisenstein? Ditto. There was that bit of sardonicism that came out of the former Soviet bloc in the form of Dusan Makavejev's films (WR: The Mysteries of the Organism, etc.), but that was not exactly grin-inducing fun. So Yuri Zhelyabuzhsky's genuinely sweet, charming 1924 silent romantic comedy, The Cigarette Girl of Mosselprom, seemed from my admittedly limited perspective to come somewhat out of left field. But it works as exactly what it aims to be, and then some. Not only does it offer abundant laughs and romance, but it has a little tongue-in-cheek, pseudo-documentary Russian travelogue and some playfully self-reflexive moves up its sleeve as well. 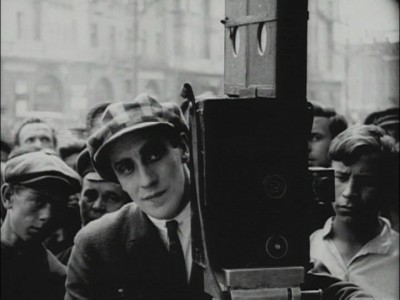 The cigarette girl of the title is the lovely Zina (Yuliya Solntseva), a carefree young woman who hawks her smokeable wares on Moscow's Mosselprom Trade Center for a living. Zina's fetching presence unwittingly draws the attention of several admirers: a portly American tycoon, Mr. MacBride (M. Tsybulsky), who is in town for business; Mityushin (Igor Ilyinsky), an overzealous junior accountant who is one of Zina's most frequent customers despite being a nonsmoker; and Latugin (Nikolai Tsereteli), a cinematographer for a Moscow movie studio. While out on a location shoot for which Zina has been corralled as an extra, Latugin, who has already had his head turned by her, has the chance to get a good gander at her alluring prettiness (his distraction comically ruining the shot) and falls in love with her, enthusiastically recommending her star power to his bosses at the studio. Meanwhile, Mityushin's love note to Zina (which he probably never means to send) gets misdirected so that his coworker, an ungainly secretary he sometimes dates casually, thinks she is the object of his obsessive affection.

Mr. MacBride's infatuation increases, and his seedy appeals to Zina to be his kept woman become more and more blunt and pushy. In an unfortunate coincidence, the entitled and domineering MacBride is also a principal investor in the movie studio, and his lust for Zina gives him a special, ulteriorly-motivated interest in the current production, in which Latugin has maneuvered to get the soon to be ex-cigarette girl a lead part. When Latugin gets too uppity while defending Zina from the film's overcritical director and is removed as cameraman, MacBride is at the ready with financial backing to send him "on location" (and, he hopes, out of the way) to make a life-in-Moscow documentary. Poor Mityushin, lovesick for the now more out of reach than ever Zina, resolves to write a movie script just for her; but his failings as a screenwriter get him laughed out of the producers' offices, and his newly inflated, pseudo-intellectual screenwriter's head gets him canned from his accounting job. Just when it seems like everything is going to go as wrong as possible for everyone (except maybe Mr. MacBride), an outrageous, unfounded suspicion and accusation made by Mityushin against MacBride throws everything back up in the air again; and, since this is as much a comedy in the literal/Shakespearean sense (all's well that ends well) as in the modern, smile-and-laugh-along sense, we can enjoy the way fate rather recklessly juggles the careers and romantic prospects of Zina, Mityushin, and Latugin, since the film's tone, pacing, and performances all boost our confidence that it will, in the end, set each of their destinies down gently enough, in more or less the right spot. 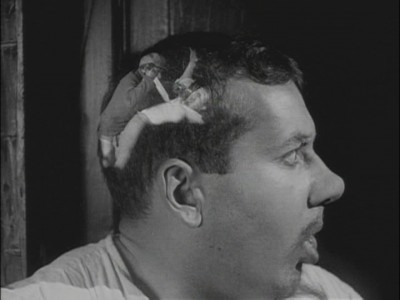 That comfortably amusing romantic-comedy mood is set and maintained by the film's loose, madcap, sometimes even slapstick sensibility. Zhelyabuzhsky's breezy touch renders light as a feather all the plot convolutions and endless delays in the characters' gratification. The absence of heard dialogue hardly limits Zhelyabuzhsky and the actors from introducing and affectionately mocking the characters' human foibles, insecurities, and naive self-involvement; if anything, the film convincingly demonstrates that such things can be more clearly, less laboriously conveyed via exclusively visual means. There is a very funny visual gag, for example, involving Latugin's Moscow documentary: a portentously announced shot of a newly erected Dostoyesky statue actually leaves the poor novelist blurry and off to the side in the background as Latugin's besotted camera eye fills about three quarters of the frame with his adored, preening Zina. In another clever, funny little fillip, an offhand profile shot allows us to see a mini-film playing inside of Mityushin's brain, depicting his worst, most hysterically paranoiac fears.

Although The Cigarette Girl of Mosselprom is generally more straightforward than the relentlessly inventive contemporaneous work of Eisenstein, its little moments of indulgence in a casual, nonchalant liberation of storytelling technique are indicative of the film's overall delightful deftness and lightness of touch. The cherry on top of all of that is our (and some of the characters') frequent uncertainty as to what is "really" happening--especially to Zina, as everyone's eyes are usually on her, whether she is acting or not--and what only appears to be happening, as movies are always being made by the characters within the "reality" of the movie we are watching. This conceit, insouciantly smart but never leaned on too hard, leads up to and pays off in a final moment that is every-so-slyly touching even as it leaves us with one last good chuckle. 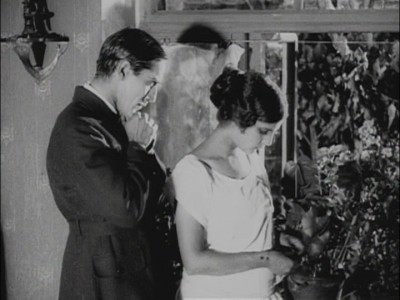 
Kino's release of The Cigarette Girl of Mosselprom uses a new, high-definition 35 mm restoration of the film, and it looks fantastic. Allowances must be made, as always, for the age of the film and the technical limitations of its era, which means some flicker and fading throughout, as well as signs of print damage (scratches, lines) here and there. With that in mind, this restoration and transfer (at the correct 1.33:1 aspect ratio) exceeds expectations by far and is a pleasure and a privilege to look at.


The Dolby Digital 2.0 stereo soundtrack for this silent film (intertitles are in English, with some onscreen Russian text in certain scenes also translated as English subtitles) is comprised of an alternatingly droll and zany but always apt set of melodies composed and played especially for the film by Charlotte Castellat and David Lefèbvre, and the mix is uniformly clear and well-balanced. Especially noticeable on the aural front is the rich, high-quality sound in a scene over which Castellat and Lefèbvre have placed their rendition of what sounds like a plaintive Russian folk ballad to match a scene where the lovelorn Mityushin performs and vocalizes with his guitar, making up a little song to himself in his lonely room.


A simple, sweet love story put through the comedic wringer of a thousand misunderstandings and complications, The Cigarette Girl of Mosselprom is "slight" in the best possible sense of the word; the stakes are never really high enough for our protagonists that we cannot laugh guiltlessly at their benign foolishness and sure-to-be-temporary setbacks. And the film, though possessed of an unassuming, free-spirited charm, is not without its fair sprinkling of rather clever, visually interesting, even somewhat avant-garde elements, too. This is the kind of pure, lighthearted yet intelligent, cinematically sophisticated affair that I think of as a "dessert movie": it may not be all that nourishing or necessary, but it is nevertheless a tempting treat, and its well-confected sweetness is too delicious to pass up. Recommended.