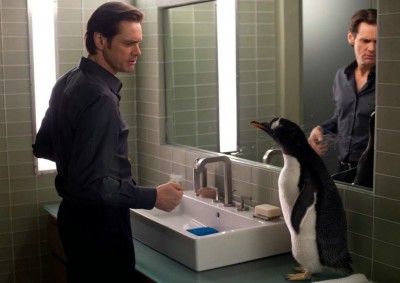 Jim Carrey has made a number of stinkers during his career, but what makes the repellent "Mr. Popper's Penguins" such a heartbreaker is that it arrives so soon after the domestic release of one of his finest performances, as the sneaky Steven Russell in "I Love You Phillip Morris." It's paycheck time again for the famous funny man, who finds himself sharing a frame with CG-animated penguins, barely staying awake while a moronic screenplay and an unimaginative director take turns urinating on a 1938 kid-lit classic. Come for the penguins, stay for the four fart jokes, four defecation gags, one shot of testicle trauma, and a series of sketchy messages for the wee ones.

A driven businessman in charge of destroying beloved New York City landmarks for profit, Tom Popper (Jim Carrey) is facing a career challenge with Mrs. Van Gundy (Angela Landsbury), the defiant owner of Tavern on the Green, who refuses to sell her restaurant. Keeping Popper from going in for the kill is a gift of penguins, willed to the heartless one by his estranged adventurer father. Hoping to ditch the creatures quickly, Popper finds the penguins bring his ex-wife Amanda (Carla Gugino), and kids Janie (Madeline Carroll) and Billy (Maxwell Perry Cotton), closer together, leaving the harried leader of the pack frantic to find ways to care for his flightless guests. Eager to take possession of the penguins is a zoo official (Clark Gregg), forcing Popper into protection mode, which threatens his professional and domestic future. 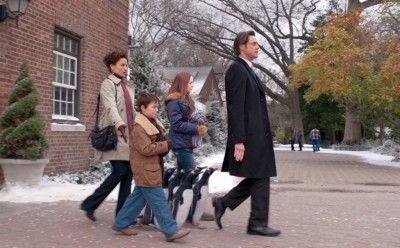 Beloved for decades, the book "Mr. Popper's Penguins" (by Richard and Florence Atwater) wasn't afraid of mischief, but carried a period-specific element of respect when detailing a tale of responsibility and unusual parental duty. The film adaptation does away with surprise and patience to hit viewers in the face with a crude run of slapstick and bathroom humor, treating the penguins not as avian enchantment, but an opportunity to make a family film like almost every other family film, teeming with obnoxious sight gags and feeble comedy, with most of the heavy lifting left to Carrey, who takes any chance he gets to improv his way out of a scene.

"Mr. Popper's Penguins" has more than its share of wretched moments, but the sheer laziness of Mark Waters's direction irks me the most. Gifted an chance to make a merry adventure with an exceptional comic and Waters would rather have the birds poop on the actor's face, or develop them with cartoon personalities to erase any sense of authenticity to the film. Yes, Nimrod, Stinky, Captain, Loudy, Bitey, and Lovey are adorable creatures (cinephiles too, captivated by Chaplin classics on television), but they're not real, with Waters using an aggressive tone of exaggeration to engage his audience. I'm not sure why this movie is even live-action at all, seeing how much of the shenanigans emerge from computer power. Wouldn't Carrey interacting with real penguins be more audacious? I suppose living birds can't poop on command. 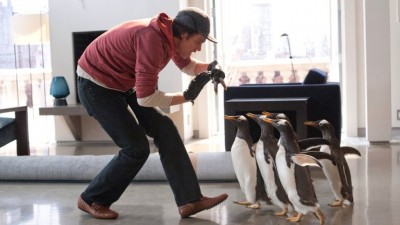 This is a lousy comedy and one that sends bizarre messages to younger viewers, arranging a rekindled romance subplot between Popper and his ex, who find feelings for each other in the middle of the penguin chaos. Never mind the fact that she already has a serious boyfriend and he's exhaustively demonstrated a serious disinterest in family life. Hey kids, mom and dad are getting back together! Also distasteful is the script's portrayal of the zoo official, writing the guy as a mustache-twirling villain to summon cheap conflict. Honestly, who would you rather see in charge of the penguins: a man with history and dedication to the care and protection of animals, or the absentee dad who lives for profit, walked out on his family long ago, and houses his dim little friends in a high-rise apartment with all the windows and doors wide open?

A mid-movie stampede of penguins inside the Guggenheim Museum hints at the possibility of the project, playfully arranging some distinct visual mischief for the birds in a frantic but friendly manner. Too bad the moment is fleeting. "Mr. Popper's Penguins" would rather play coarse, programmed notes of emotion and comedy, taking the easy road of cheap laughs over a celebration of the original work, unwilling to challenge the audience with a courageous display of good taste.