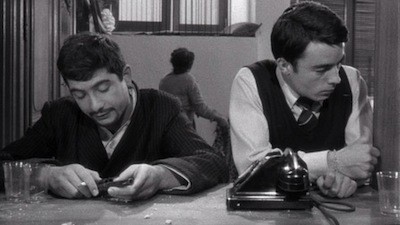 For his 1958 debut, Le beau Serge, Nouvelle Vague pioneer Claude Chabrol told the story of a man moving back to his provincial hometown after many years in the city; for the follow-up, Les cousins, Chabrol flipped things around, including changing the role "types" for his two lead actors. This time, Gérard Blain plays Charles, a mama's boy from the country moving to Paris to study law. In town, he will live with his cousin, the brash and outgoing Paul (Jean-Claude Brialy). One of their friends doubts their relations because they look nothing alike, and Charles defends this as saying they are cousins, not twins. Yet, the divide between the two blood relatives could not be wider.

It's funny when you first see Paul, you know exactly what kind of character he is. His Van Dyke and European poncho is practically the uniform for parodies of the sort of pretentious, privileged douchebag Brialy is portraying. It's a case of the more things change, the more they stay the same, I guess, that Chabrol's visual short cuts still have cultural significance. Paul is a selfish partyboy, living in his uncle's flat surrounded by the old man's trophies and trinkets, symbols of a life well lived (and all shot with loving attention to detail by cameraman Henri Decaë, who also photographed Le beau Serge as well as films for Malle, Truffaut, and Melville). Not the life Paul is living, mind you, he is on a different path. He drinks and cavorts more than he studies, and his friends represent the social register for degenerates, from the older hustler Clovis (Claude Cerval, The Lovers) to the slut Francoise (Stéphane Audran, The Discreet Charm of the Bourgeoisie) all the way to the bottom of the heap and the hopelessly emo Philippe (Jean-Pierre Moulin). They drink and they gamble and they carouse, and generally make a spectacle of themselves.

This is the life that Charles is immediately introduced to, and the one he never really fits. Gérard Blaine, who was fiery and charismatic in Le beau Serge, withdraws here. Charles is thoughtful and insecure, with a stoic streak that allows him to mask his anxieties and disappointment. (One is easily reminded of James Dean watching Blaine do his thing.) It's love at first sight for Charles when he sees Florence (Juliette Mayniel, Eyes Without a Face), a girl with a past but whom Charles sees with fresh eyes. He is enamored of her, he can't even bring himself to recite a poem he wrote in her honor. Florence is drawn to his innocence, but Clovis and Paul manipulate her into Paul's bed instead. The girl moves in with the two cousins; rather than have his nose rubbed into his romantic failures, Charles buries it in his books. (The advice of a sagely bookseller, actually, played by Guy Decomble, who would soon play the French teacher in The 400 Blows.)

The portion of Les cousins where the three of them live together recalled for me, in a way, Jean-Pierre Melville's adaptation of Les enfants terribles. In fact, quite a bit of the basic behavior Chabrol assigns to his characters seems inspired by the Cocteau play. Paul regularly engages in self-serving gameplay, taking little seriously and concocting scenarios where he can push others into servicing his whims. In my head, Jean-Claude Brialy is usually dapper and collected, the kind of handsome ladies man he played in Godard's A Woman is a Woman. He is more of a force of nature here. Like the cliché about the shark, he is never at rest, always moving. Clovis, who resents him as much as he likes him, acts as the devil on his shoulder, offering a bit of contrast. Paul does what he does for his own amusement, but Clovis cons and cajoles for spite and thievery. There is a great shot at one of the parties, it happens very quickly, when you see Clovis robbing Paul's secret stash--something we instinctively knew he would do the moment Chabrol showed us that hiding spot in the first act, when the pair were convincing one of Paul's conquests (Geneviève Cluny) to get an abortion. Even in that, the difference between the two men is obvious: Paul is trying to weasel his way out of trouble, whereas Clovis likes the taste of other people's misery.

It's a little disappointing, then, that Chabrol circumvents the expectation of these narrative seeds, and Clovis' demonic personality doesn't have much reward. At the very least, we might assume Paul would completely switch over to Clovis' particular dark side or overtake the master. The sad fact is, there isn't much narrative payoff at all in Les cousins, except for maybe a nod to an old Chekhov aphorism. The ending of the film isn't entirely satisfying. I see the dramatic irony that Chabrol is going for, but it doesn't land with any significant force. The final scene only reinforces the roles everyone plays rather than showing any change. Charles is a perpetual victim, Paul is the thoughtless predator.

I don't know whether to call it the "sophomore jinx," or if perhaps emptiness is exactly what Chabrol is going for. Paul strives for a meaningless world. This is a guy to whom romance is a joke and who recites Wagner arias while wearing military garb. It's all fair game to him, so perhaps Chabrol intended the real tragedy of the finale of Les cousins to be that so much was destroyed with such little consideration. Rather than death by a thousand cuts, it's death by one triviality. Jean-Luc Godard called Les Cousins "a deeply hollow and therefore profound film," and I suppose it could be that this lack of any meaningful center is what makes Les cousins so intriguing. Even as I react against its contrivances, I find myself considering putting it back in my player and watching it again. 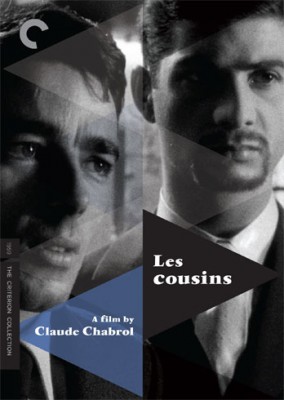 Video:
Criterion have really outdone themselves on their recent Claude Chabrol releases. The AVC/MPEG-4-encoded, 1080p-mastered transfer on Les cousins, shown at its intended 1.33:1 aspect ratio, is marvelous. The black-and-white photography is sharply balanced, with clear imaging and razor-wire resolution. There are no instances of marks on the screen, or of any lack of focus. Details go deep, and the grain adds to preserving the look of this older film rather than obscuring or smoothing over the cinematography. It's one of those times where you can really see what a difference high definition can make, even for movies that are half a century old.

Sound:
The uncompressed monaural soundtrack is also distinguished by its clarity. The sound is full without being distorted, and there is no hiss nor any pops, not even in silent scenes. The optional English subtitles serve the viewing experience well, being easy to read and appropriately colloquial.

Extras:
Criterion includes a thick booklet with their release of Les cousins, with photos, credits, a critical essay by Terrence Rafferty, and a heartfelt, but honest tribute to Gérard Blain taken from Jean-Claude Brialy's autobiography.

Adrian Martin provides a commentary track for the film, detailing its place in Chabrol's canon while also looking at the personalities in the film and the meaning behind the work they did.

There is also a theatrical trailer.

FINAL THOUGHTS:
I liked Les cousins, but I wanted to like it more. The ending lacked the expected impact, and while, granted, that may have been Claude Chabrol's purpose, to leave us wanting, it does make a difference when, as a reviewer, I have to weigh my thoughts of the film. I enjoyed the performances by Jean-Claude Brialy and Gérard Blain, I liked the dark situations Chabrol contrived to put them through, and their interaction as cousins from opposite sides of tracks both literal and metaphorical was riveting through most of this 1959 movie. The lack of a truly visceral punch at the finish unfortunately detracts from that somewhat. Perhaps it's a case of managed expectations, and on later viewings I will find myself warming to Les cousins more. I suspect so, but until then, Recommended.