MGM Limited Edition Collection // Unrated // April 18, 2011 // Region 0
List Price: $19.98 [Buy now and save at Amazon]
Review by Stuart Galbraith IV | posted June 22, 2011 | E-mail the Author
One of Hammer's very best early films, Cloudburst (1952) is a multifaceted thriller unusual in many respects. Before Hammer became internationally famous in the late 1950s for its genre thrillers, particularly Gothic horror films, the studio established its name domestically by adapting popular stage, radio, and television plays, often with an American leading man and/or woman to help sell the movie abroad. Both are true here. Leo Marks adapted his own stage play, and it stars Robert Preston, who had been acting in Hollywood movies since the late 1930s but was still years away from his signature role as The Music Man.

Both Preston and Marks had been intelligence officers during World War II, Preston with the U.S. 9th Air Force and Marks as a cryptographer for the Special Operations Executive (S.O.E.). Their personal histories lend enormous credibility and verisimilitude to the film's setting and its dramatic complications.

Marks sometimes wrote richly romantic code poems for the agents he sent behind enemy lines, the most famous of which, The Life That I Have, was immortalized in the excellent British film about spy Violette Szabo, Carve Her Name with Pride (1958). His fascination with codes also plays a role in his script of Peeping Tom (1960), the once-reviled Michael Powell film now considered a masterpiece. Cloudburst incorporates all of these same elements, including its strange, beguiling romanticism.

Despite some minor warping of the surviving film elements, the black and white, full-frame Cloudburst looks quite good on DVD, a half-notch above VCI's Kit Parker-owned line of Hammer films released over the past few years. Part of MGM's "Limited Edition Collection" line of DVD-Rs, this title includes no extra features apart from a textless trailer. It deserves to find a bigger audience. 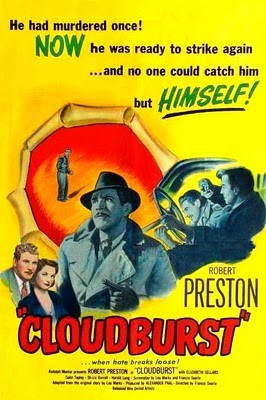 In 1946 London, Canadian John Graham (Robert Preston), a respected former resistance agent, supervises a cryptography team tasked with breaking coded wartime messages that will help locate and convict war criminals. Graham lives with his pregnant wife, Carol (Elizabeth Sellars), who had fought alongside her husband during the war, and who when captured by the Gestapo refused to divulge his whereabouts, even after several days of torture. (As Graham later explains, the Nazis eventually exposed a nerve in her leg, pulling on it with a wire and permanently laming her.)

Their promising postwar life is shattered when Carol is brutally struck by a speeding car, driven by a couple evading arrest after murdering a night watchman in another town. Graham begs Mickie Fraser (Harold Lang) and Lorna Dawson (Shelia Burrell) to take Carol to the hospital, but the woman stabs him in the hand with some scissors, backs the car over Carol, killing her, and they drive off.

His life in tatters, Graham decides to respect Carol's wishes that, in similar circumstances, she would hunt them down and kill them personally, her "hate overwhelming like a cloudburst." For most of the film, Graham draws on his past experience to plot their murders while eluding the police.

Both richly-layered and unusual, Cloudburst's unusually sympathetic killer in some ways anticipates by several decades the vengeance sub-genre of the 1970s and '80s heralded by Death Wish (1974). But unlike that film, in which architect Paul Kersey (Charles Bronson) struggles with the moral conflict of taking another person's life in retribution, Graham's wartime experiences fighting the Nazis erased all doubt - he's already seen mankind at his worst - and Fraser and Dawson are comparative amateurs.

The screenplay comes close to endorsing Graham's vengeance, with Inspector Davis (Colin Tapley) barely reining it in, insisting Graham has broken a moral code that as agents Graham and his wife tried to protect. But this almost comes off as a disingenuous concession to British and American censorship. As far as Marks is concerned, the killings are poetic justice in the strictest sense. Graham's actions even reflect a romantic devotion quite moving in the film's last scene, in which his encrypted notes, accidentally left at crime scene, are finally decoded and read aloud.

The use of codes and puzzles throughout the film is intricate. Carol, for instance, is introduced working on a crossword puzzle while waiting for her husband's return. When the killers drive off, there's a visually interesting montage as Graham, slipping into unconsciousness, memorizing the vehicle's license plate: another code to be deciphered. And not only are Graham's steps to locate the couple clever and logical, in trying to evade detection from the police Graham's relationship with the fugitive Lorna Dawson in a perverse way parallels Marks's to female agents like Violette Szabo. At one point the police have Dawson under arrest but she's not talking and, because he wants to exact his own personal justice, he won't give her away. More cleverness: After his wife's murder, her body and Graham are taken away in an ambulance. As it pulls away, a literal cloudburst begins.

Marks's story plays at least partly autobiographical, as if Graham's cold vengeance against the small-time killers reflected what Marks probably wished he could have done to Nazis that murdered his female agents working undercover in Holland and France. He shares Graham's guilt over those women who were tortured and killed, and through Graham it's as if Marks metes out justice to those who in real life may have escaped unpunished.

Robert Preston is superb expressing all this, delivering an understated performance complimented by his extremely handsome features and melodious voice. Watching this, you wonder why stardom came so late.

Cloudburst's film elements are slightly warped, and if one looks closely near the center of the frame the images wobbles in-and-out of focus slightly, though otherwise the picture is sharp with good contrast. The region-free DVD-R disc's Dolby Digital mono audio (English only, with no subtitle options) is crisp and clear. There are the usual chapter stops every ten minutes, but no other menu options.

A U.S. trailer is included but it's textless and therefore pretty useless in terms of understanding how this unusual, ahead-of-its-time movie was marketed. Still, better than nothing.

As colleague DVD Savant concurs in his carefully-considered review, Cloudburst is a major discovery, a worthy companion feature to Michael Powell's Peeping Tom, and despite the lack of extras a must-see. A DVD Talk Collector Series Title.