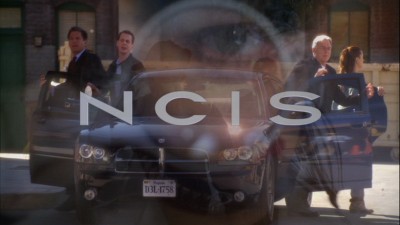 NCIS (short for Naval Criminal Investigative Service) is one of the most successful television series ever made with a wide audience spanning different backgrounds and countries. It is no surprise the show is as popular as it is. The series features continuing story-arcs from time to time but the bulk of the series is episodic and the characters are some of the best written and acted on any network show. NCIS remains a favorite of many because of how well made each episode is and because the show has actually managed to remain that way for several seasons while being consistently entertaining and engaging (intellectually and emotionally).

The number one reason to watch NCIS has to be the characters and the performances the actors bring to their characters. Each actor has one of the best roles on television and it is rare to find so much talent (both on screen and in scriptwriting) on one show. Mark Harmon electrifies as Special Agent Jethro Gibbs - he gets to perform the role of leader to the entire group working on the series and the character is one that brings charisma, intelligence, and strength to the show (especially through guidance to the other characters). Special Agent Anthony DiNozzo (Michael Weatherly) is the one individual at NCIS who probably looks up to Gibbs the most and he brings the comedic factor up several notches, and still manages to be an increasingly dramatic backbone to the entire show. Especially in season eight: there seems to be many plot-lines concerning Anthony DiNozzo and those are fascinating to watch unfold and build. It also helps that the character is a huge film buff that can make film trivia exciting for everyone. 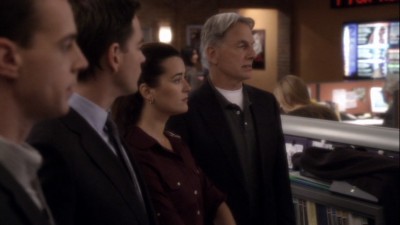 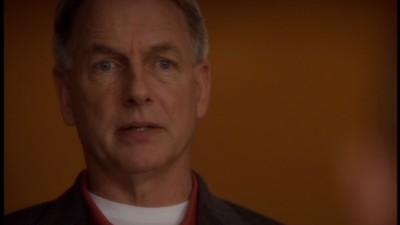 Pauley Perrette excels as the lovable and high-energy Abby Sciuto - an interesting character that melds the world of gothic-style clothing design with the kind heartedness found in a genuinely loyal and intelligent woman. Abby is one of the smartest characters (and kindest too). The eccentricities of the character would seem bizarre in one sense of understanding but make perfect sense when considering the character viewers get to know and love over the course of the show. It's actually difficult to not smile when Abby is on screen. Sean Murray plays the equally nerdy but somewhat more reserved and solemn Special Agent Timothy McGee. This character is a bit of an underdog in the show (McGee started out in a fairly normal office position) yet there are many moments where the strength and dedication of this wonderfully spirited man shine through and that is always wonderful to witness. Cote de Pablo surprises as Ziva David: she is the toughest of the entire group (she always seems ready to kick some butt) and her storyline often brings some real sadness into the stories but she demonstrates great strength throughout NCIS and that makes the character one of the most important links to hold the group together.  Ziva also has some great chemistry with Anthony - if only the pair would admit it to each other and have a beautiful relationship together. Then there's the tough glue:  NCIS Director Leon Vance (Rocky Carroll), who  is one character that manages to help  keep things  running smoothy. Lastly, the show just wouldn't be the same without the eccentric Ducky (David McCallum) and his equally bizzare yet sweet apprentice Jimmy (Brian Dietzen) working on all of the medical examinations. 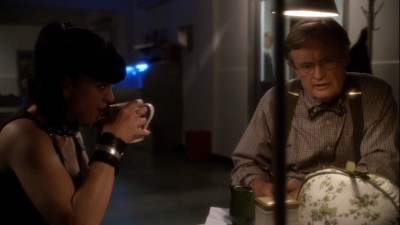 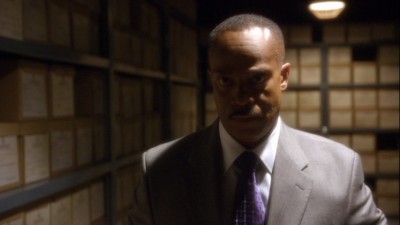 The writing and directing on NCIS is always consistently stellar and plays a huge role in why the show continues to be so excellent. James Whitmore Jr. does a particularly great job in the director's chair and has crafted some of the most excellent episodes (including the one entitled "A Man Walks Into a Bar...", a special moment in the season that was capable of being a clip-show styled episode (with flashback moments toward previous seasons and episodes) and also a new story that was compellingly told from start to finish. This season of NCIS has so many great episodes though. So many great moments throughout... and there is not a single poorly made episode in the entire season.

One of the greatest strengths of NCIS is that it remains consistently creative in how it tells its stories despite being a procedural series. It's amazing how the show never seems to run out of ideas. The behind-the-scenes creative team is so good at what they do that even with eight seasons the show feels full of great ideas and genuine energy. This season isn't even a bad place for newcomers to start out. While it would make a lot more sense to begin at the beginning of the show there is little doubt that NCIS can continue to gain new fans through re-runs and new episodes.

It doesn't take long to realize the greatness of NCIS is not in the plots necessarily (although there are many great ones) but in the characters, their dynamics, and the unique writing and direction that keeps each episode in a special league known as the highest class in television entertainment. To put it simply: If you haven't already started watching NCIS you're missing out on one of the best shows out there. 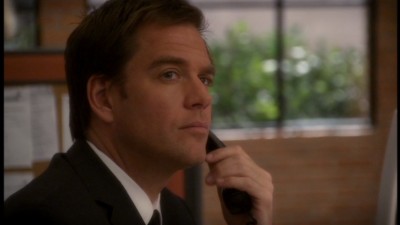 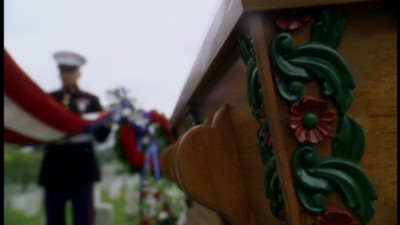 NCIS: The Complete Eighth Season arrives on DVD with each episode presented with the original broadcast aspect ratio of 1.78:1 widescreen (with anamorphic enhancement for 16:9 television displays). The show has an appropriate modern-day look that feels as if production elements are definitely above-average. The series colors do seem somewhat muted though and are never quite as memorable as productions like Lost or Battlestar Galactica. The series has decent contrast and image depth. The look of the show has a unique balance of looking somewhat naturalistic and smooth at the same time. The PQ found on this DVD release seems to properly represent the look the series has always displayed. Each disc contains three to five of the twenty-four season eight episodes.

The series is presented with a worthwhile 5.1 Dolby Digital surround sound option that does enhance the overall aural experience and the entire presentation of the show. The sound is often important to each episode and there tend to be a good number of sound effects that benefit from the surround mixing. Dialogue is always easy to hear and understand. Music is also well balanced. English Stereo and French Stereo are also included. Subtitle options are: English SDH (for the deaf and hard of hearing), Spanish, Portuguese, and French.

NCIS: The Complete Eighth Season contains several extremely well produced extras that are going to seriously please series fans. It's awesome that every single bonus feature on Season 8's box-set release is worth checking out. For this section of the review the extras will be mentioned in the order in which they are presented across the discs (mainly so that viewers will know where to find them).

Disc One has an "I Have a Question For..." (11:59) extra. Fans attending a costume based NCIS gathering submitted questions to the cast. Mark Harmon, Michael Weatherly, Pauley Perrette, Sean Murray, and Cote de Pablo respond with delightful answers that are humorous or insightful. The actors manage to cover a wider range than expected with such a short run-time. While the end result is more silly than serious it's all in good fun and fans will delight in hearing them share their thoughts on the characters (or on themselves) with such enthusiastic fans. 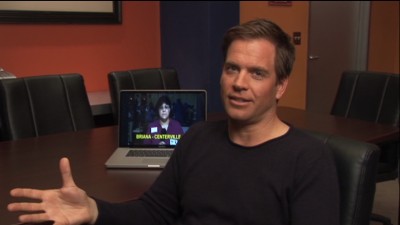 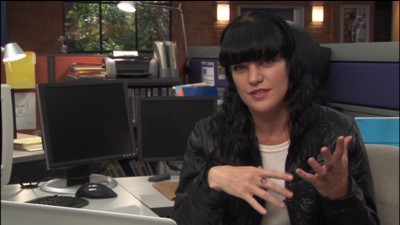 Disc Two brings a much more insightful and informative featurette to viewers. Technically Speaking: A Conversation (9:15) is an inside look at how the show aims to be as true to the actual NCIS work as possible. It features interview footage with technical Advisor Leon Carroll, Jr. (whose participation on the show is essential for making it work as a whole). This was a wonderful behind-the-scenes piece that highlighted an aspect of the show that was in need of some more recognition for all of the knowledge and talent Leon Carroll, Jr. brings as the technical advisor.

Disc Three turns to the spotlight to the work done on a specific episode. Practical Magic: Turning Back (4:03) focuses on highlighting some behind-the-scenes work done on the episode entitled "Enemies Domestic" which brings flashbacks to the college days of NCIS director Leon Vance. As the extra is short in length it doesn't go in depth but the footage shown and interviews featured are both humorous and educational.

Disc Five offers an extra that is sure to please both series fans and movie buffs: Lights! Camera! Weatherly! Michael Weatherly Directs an Episode (10:37) focuses on the process of actor Michael Weatherly directing an episode of NCIS (which he also starred in). Michael Weatherly plays Special Agent Anthony DiNozzo. Fans know that the character is a massive film buff who says movie references all the time. This episode features even more references than usual. The making-of mostly consists of interviews with Weatherly and the cast/crew who worked with him on the episode. It also contains some footage of Weatherly working to set up scenes to direct. Anthony DiNozzo happens to be my favorite character on the series - I love the humor of the character and the film references make it all the better. This was a fun bonus feature that I certainly recommend to fans of the series who consider Michael Weatherly one of the best reasons to watch NCIS.

Disc Six contains multiple bonus features to enjoy (it is the last disc in the set, after all).  Grab Your Gear: A Look at Season 8 (26:32) contains tons of insightful interviews with cast, producers, writers, and other crew members. The feature delves into the overall arcs found in the season and looks at the creative process for the season. Despite running at less than 30 minutes long for a full season of the show this was one of the best extras on the set and any fan who has some curiosity about the behind-the-scenes work done on NCIS should enjoy this entertaining min-doc of sorts.

Very Special Effects (10:24) contains footage and interviews regarding the special effects used for the show. This feature focuses more on the technical effects than the "special" (i.e. CGI) effects and it's fascinating. It was surprising just to see how detailed things have to be at times for the scenic backdrops of an episode and it really makes one appreciate the effort even more.

Murder, They Wrote: The Writers Talk about NCIS (9:38) is the final extra on the set and it features footage of the writers of NCIS working on the show and interviews with the writers (and producers) about the creative writing process behind this series and all of the characters that help to make NCIS so wonderful and the gigantic television success that it is. 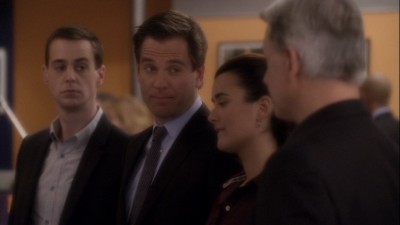 NCIS is a procedural show that actually manages to be brilliantly executed because of the great characters, performances, and all-around craftsmanship from the creative team that makes it possible. Season Eight consists of 24 excellent episodes and the DVD release has tons of worthwhile bonus materials to make it one worth owning and revisiting (or even as something to experience for the first time). Highly Recommended.