MGM Limited Edition Collection // Unrated // May 2, 2011
List Price: $19.98 [Buy now and save at Amazon]
Review by Stuart Galbraith IV | posted July 5, 2011 | E-mail the Author
Despite a budget really too low for its ambitions, Samuel Fuller's Park Row (1952) is at once a romantic, exciting, and authentic portrait of the New York newspaper business circa 1886. Fuller himself was every inch the cigar-chomping Front Page reporter, supposedly covering the crime beat while still a teenager and credited with breaking the news of Jeanne Eagles's death when he was barely 17 years old. Park Row, Fuller's fourth low-budget film as a director, was obviously a personal project and he sank all his money into its production, some $200,000 - save for a grand he kept for vodka and cigars.

The film is Fuller's Citizen Kane: the subject matter is similar and like Orson Welles's masterpiece Fuller crams every scene with innovation and terrific performances.

Part of MGM's "Limited Edition Collection" line of DVD-Rs, Park Row has been given a strong black and white, full-frame video transfer that does the picture justice. The only extra feature, alas, is a trailer, but it's complete with text and narration. 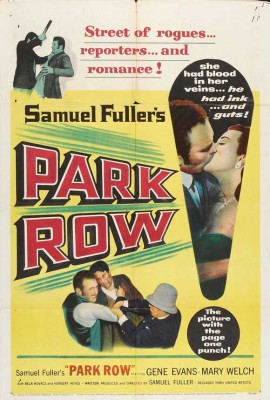 Park Row's many innovations start with the opening titles. The mastheads of all 1,772 daily American newspapers that existed in 1952 - and almost all of which are gone in 2011 - are shown under the words "One of them is the paper you read. All of them are the stars of this story. Dedicated to American journalism." The remaining credits are also unusual. "Samual Fuller Productions" is presented as a line of metal type, dropped into the film's Park Row soundstage set. The positions of actors and character names are reversed (a device more confusing than effective) and the movie concludes not with "The End" but rather with "Thirty" - newspaper jargon for "End." (Jack Webb's 1959 film about a modern-day newspaper is also called - 30 -.)

In 1886, Steve Brodie (George O'Hanlon, of Joe McDoakes and George Jetson fame) and Jenny O'Rourke (Tina Pine) operate a local watering hole popular with the reporters of Park Row, the epicenter of Manhattan's newspaper industry. Phineas Mitchell (Gene Evans, The Steel Helmet, Gorgo) bemoans the yellow journalism of The Star, which successfully swayed popular opinion against an innocent man recently executed. In protest Phineas adds an epitaph to the man's grave: "Murdered by The Star." The paper's wealthy, unethical publisher-editor, Charity Hackett (Mary Welch) storms in to confront Phineas, who turns out to be a reporter for The Star himself, but he tears her to pieces and she fires him.

Impressed, leaflet printer Charles A. Leach (Forrest Taylor) offers Phineas the chance to publish and edit his own daily newspaper with Leach's backing and facilities. Phineas leaps at the opportunity, turning out The Globe's first edition that very night, a four-pager headlined by news that Steve Brodie, wanting to promote his wife's saloon, has jumped from the Brooklyn Bridge and lived to tell the tale.

Phineas cultivates a staff of crack reporters and other newspapermen with newsprint ink in their veins. He champions a popular "Liberty Fund" promoting completion of the Statue of Liberty while his staff gradually develops one of the first linotype machines, enabling greater print runs and more editions. None of this sits well with Charity, who becomes jealous of Phineas's successes and vindictively launches a series of malicious assaults on The Globe, hoping to drive it out of business.

Though Fuller hoped to shoot Park Row on location in New York, the best he could manage was a massive interior set rather like Disneyland's "Main Street, U.S.A." It's about a block long with forced-perspective alleys and painted backdrops, and while elaborate and bustling with period flavor it's not terribly convincing. The film was shot in just 14 days where 30 would have been better, and this may account for the many long, uninterrupted takes and postproduction tinkering in which these long takes were broken up into several cuts via grainy optical printing.

Nonetheless, Fuller's passion is infectious and Park Row is genuinely exciting and at times even exhilarating. This is exemplified in an early scene where Phineas cuts Charity down to size with informed, brutal criticisms against the policies of The Star - Did somebody say "News of the World?" - statements which have as much relevance today. Gene Evans, a coarse, red-faced character actor usually at home playing menacing backcountry types, is an unlikely leading man but utterly perfect as Phineas. He projects the same passions about journalism as Fuller did in interviews. At times his voice and mannerisms even strongly resemble Fuller himself.

Indeed, the acting in Park Row is excellent across the board. Mary Welch, a Gale Sondergaard/Hillary Brooke type, is simultaneously spiteful and alluring, though her attraction toward Phineas (and vice versa) halfway into the picture comes out of left field and doesn't really fit the rest of the picture. This was her only movie; married to Bewitched's David White, Welch died during childbirth a few years later.*

Herbert Hayes, who coincidentally died on the very same day in 1958 as Welch, is superb as The Globe's septuagenarian reporter, Josiah Davenport, delivering the type of understated, completely naturalistic performance rare in early '50s films. O'Hanlon and Tina Pine, later a good television and film writer (best known for the film and TV series of Popi) are memorable, as are Bela Kovacs and Don Orlando as The Globe's linotype inventor and typesetter, respectively.

The picture hums with verisimilitude and lots of little details drawn from historical fact or anecdotes Fuller heard back in the late 1920s. Orlando's diminutive Mr. Angelo, for instance, is illiterate - he can't read a word - but that doesn't stop him from typesetting, one character at a time, perfectly and with amazing speed. When the burgeoning paper runs out of newsprint they switch to butcher's paper and anything else they can find. Throughout the picture the viewer learns myriad little details about the mechanics of running a daily newspaper - it finally explained for me what a "printer's devil" does - and it's all fascinating stuff.

Fuller overcomes most of his budgetary deficiencies through sheer chutzpah. Despite the aforementioned optical printer cutting of that early scene, the uninterrupted take is so interesting and well acted that the artificial cutting wasn't really necessary even if its purpose was to get several pages in the can in one take. Later, when thugs hired by The Star attack The Globe's newsstands, Fuller audaciously opts for a frantic tracking shot covering the length of his massive Park Row set. I've never seen anything like it in a fifties film. This everything-including-the-kitchen-sink approach doesn't always work but it's continually visually arresting in a manner similar to Laughton's likewise low budget The Night of the Hunter (1955).

Park Row, filmed in black and white for 1.37:1 projection, looks very good in this region 1 encoded DVD-R release. The image is crisp with good blacks and contrast. The Dolby Digital mono audio, English only with no subtitle options, is likewise fine. There are the usual chapter stops every ten minutes, but no other menu options save for the trailer.

The included trailer tries hard to sell 19th newspapermen as glamorous and exciting but can't quite pull it off, even though the movie accomplishes exactly that.

As colleague DVD Savant notes in his similarly enthusiastic review, Park Row is so good it ought to be shown in schools alongside All the President's Men, and I couldn't agree more. A most welcome release and a DVD Talk Collector Series Title.

* This helps explain White's excellent performance in the emotionally powerful Twilight Zone episode "I Sing the Body Electric," in which he played a recent widower and single father. It was a role hitting close to home.