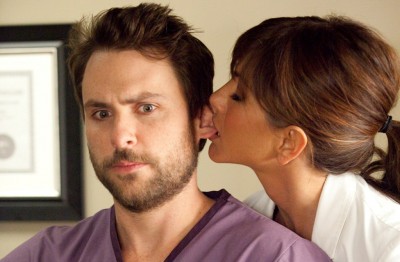 "Horrible Bosses" is a missed opportunity. Handed a darkly comic premise of revenge, and the producers turn the proceedings into a clumsy "SNL" skit. Following in the wake of the rancid "Bad Teacher," "Horrible Bosses" also seeks approval by establishing a sloppy routine of shock and improvisation, slapping viewers with pedestrian acts of misbehavior when something far more macabre was in order. Unless you happen to find Indian call centers, the act of spilling cocaine, and Jennifer Aniston being self-consciously filthy hilarious. If so, boy do I have a film for you.

Nick (Jason Bateman), Dale (Charlie Day), and Kurt (Jason Sudeikis) are three sad sacks having a heck of a time dealing with their wicked bosses: sex addict Julia (Jennifer Aniston), cokehead Bobby (Colin Farrell), and megalomaniac Dave (Kevin Spacey). Fearing the current job market, the boys make do with their daily humiliations, yet secretly wish they could radically alter their situation. Hope arrives in the form of a crook (Jamie Foxx) who's willing to advise the trio on the finer points of murder, commencing a plan that has the men actively seeking a way to kill their bosses. Hesitant but intrigued, the gang jumps into action, only to stumble over their tremendous incompetence at every turn. 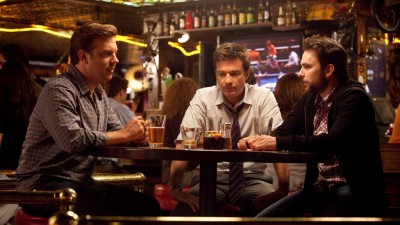 "Horrible Bosses" seems like such a wicked good time -- a crass, amoral comedy that plays into sinister acts of wish fulfillment; a drunken fairy tale for anyone stuck under a controlling, demanding supervisor. It's a shame the film doesn't show a little more invention in the comedy department, courageously offering an audacious screenplay that takes the premise semi-seriously, while preserving the outlandishness of the plan. Instead, "Horrible Bosses" resembles most comedies these days, distended with improvisation and crude acts of shock value. In place of genuine moviemaking danger there's Colin Farrell bombing around with a pronounced comb over (a shoddy make-up appliance), Jennifer Aniston trying on an ill-fitting potty mouth, and Kevin Spacey reviving his Buddy Ackerman character from "Swimming with Sharks."

The rest of the jokes are left to Day, Sudeikis, and Bateman, who form a Three Stooges squad of sorts, fumbling around on the hunt for a perfect way to dispatch their enemies. The banter is unfocused and predictable, chaotically pieced together by director Seth Gordon ("Four Christmases"), who relies too heavily on the riffing, losing control of the film's identity. There's no snowballing plot to follow here, the movie is more about episodic encounters where the gang infiltrates the living spaces of their supervisors, leading Dale to spill a box of cocaine (cue the dustbuster gag), while Kurt take time to shove various oral hygiene products up his rear end. Did I mention the scene where the guys attempt to hire a hitman online, only to welcome a professional specializing in golden showers into their hotel room? The script is filled with gems like that, arranging lazy gross-out encounters and uninspired numbskullery. 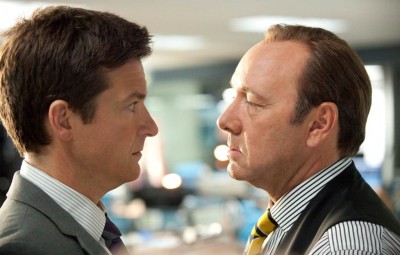 "Horrible Bosses" doesn't have the gumption to take its premise to a logical conclusion, refusing to darken the film outside of a few gunshots. The titular domineering types are also a bit of an afterthought, with Farrell and Aniston contributing more cameo appearances than supporting roles, leaving Spacey to do all of the heavy lifting. With the rest of the actors off incessantly trying to verbally one-up one another, Spacey's steely professionalism is actually quite welcome.

The end product is a blurry bit of indecision and trendy comedic impulses, lacking a razor wit that would contribute some badly needed surprise. "Horrible Bosses" is content to play it safe and stupid, which is a waste of time and talent.