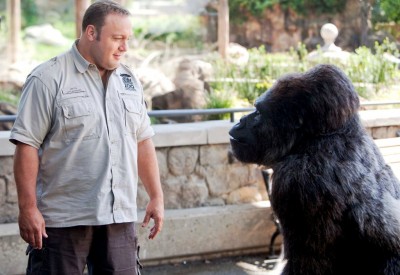 Kevin James and talking animals. Doesn't seem like a particularly extensive screenwriting challenge, yet "Zookeeper" features an extraordinary amount of outside interference for a picture that shouldn't stray from the essentials. More amusing than funny, but only when it includes the antics of the wild kingdom, the picture drags unnecessarily, trying to convince viewers that the human elements of the script have value when all anyone really wants to see is a talking gorilla in a polo shirt.

A champion caretaker at his zoo, Griffin (Kevin James) is stuck hopelessly in love with his former flame, Stephanie (Leslie Bibb). A spoiled woman with expensive tastes, Stephanie looks to change Griffin to suit her needs, urging the zookeeper to rethink his vocation. The thought of their pal quitting sends the animals of the zoo into a panic, forcing the creatures to reveal their ability to speak to Griffin, offering him advice on the ways of life and love. At first terrified, the zookeeper soon warms up to the likes of lion Joe (voiced by Sylvester Stallone), monkey Donald (Adam Sandler), and gorilla Bernie (Nick Nolte), accepting their experience to properly woo Stephanie, bringing in co-worker Kate (Rosario Dawson) for support. 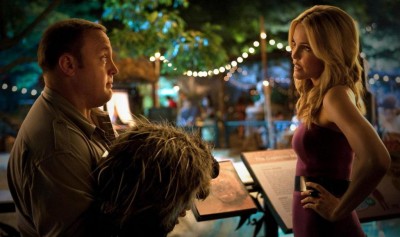 "Zookeeper" doesn't aspire to be anything more than a mild family film diversion, though I wish it were lighter with expected messages of self-worth and confidence. It's a tepid screenplay (credited to five writers, including James) that's obsessed with Griffin's lovesickness, belaboring the struggles of the zookeeper and his high-maintenance object of desire, somehow assuming audiences would rather spend time with the character's pitiful romantic fixations than his daily work with the yappy animals. It's a strange creative choice and one that hammers every last theme of the movie onto the ground, making sure the back row feels Griffin's formulaic redemption. The character and his girlfriend troubles grow old quickly.

When "Zookeeper" trots out the celebrity voices, matters improve significantly (Jon Favreau, Cher, Judd Apatow, and Maya Rudolph also join the party). The cabal of animals is where the material shines, making a pleasing ruckus with all sorts of one-liners and odd behavior. The majority of the animal stars are real with CGI accentuation, with Sandler having a ball verbally articulating the spazzy movements of a monkey. However, the best work is reserved for Bernie, a gorilla with a chain restaurant obsession who looks to Griffin as a kind pal, having endured beatings from a more sadistic staff member (Donnie Wahlberg, in a role that's like porn for members of PETA). A creation from Tom Woodruff Jr., Bernie is an amazing animatronic creature, keeping cartoon yet shockingly realistic, supplying entertaining moments of interaction with James. It's some pronounced technical wizardry blended well with Nolte's playful performance, allowing the hulk to sing along with a Flo Rida hit and tear up a local T.G.I. Friday's with his zookeeping buddy. 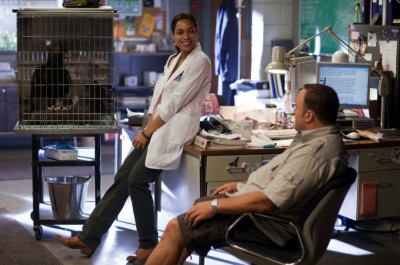 As for James, "Zookeeper" keeps the actor to a habit of fall-down-go-boom encounters, which always pale in comparison to the animal interaction moments. James is excited but the script is asleep, laboring through the motions of motivation. Better is Dawson, creating a warm presence out of a nothing role, but her charms are unable to energize the entire picture. "Zookeeper" is surprisingly dull, despite all these colorful creatures clamoring for attention. Kevin James and talking animals. This should've been something wild.