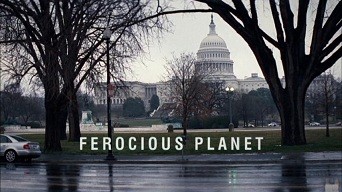 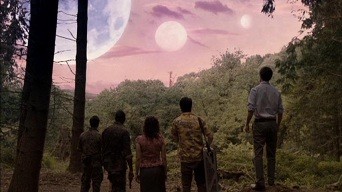 Three months ago, I posted a review for Behemoth, the first entry in the long-running Maneater Series DVD line in over a year. The Maneater Series, for those unfamiliar with it, distributes repurposed SyFy Channel creature features on home video with cover art that bears a border and a series logo. Originally released through Genius Entertainment, the line was punted over to Vivendi Entertainment via RHI Entertainment. In April, it looked like the series had been revitalized with two additional new releases on the horizon: Malibu Shark Attack and Ferocious Planet.

I'm not sure what happened to Malibu Shark Attack in the intervening three months. The online retailer Amazon still has a product listing and cover art for it, but no definitive release date is provided. However, July brings Ferocious Planet, and while this is one of the goofiest Maneater flicks I've sat through, it's one of the more engaging entries as well. Writer Douglas G. Davis pilfers a number of standby science fiction clichés in his plot (the television series Sliders and Stephen King's novella The Mist strike me as two possible "inspirations") and populates the story with amusingly banal flat characters. The standard SyFy Original Movie bad CG special effects play out, but the tongue-in-cheek approach here excuses the requisite shoddily-animated monsters.

Ferocious Planet - I think - kicks off its humorous tone with the title sequence: the words Ferocious Planet fade in with a picture of the Capitol Building in the background. Hmm. In any case, the film introduces a gathering of scientists, politicians, and soldiers at a research facility whose staff has been mucking about with technology to link us to other dimensions or realities or whatever the correct sci-fi term is. Amongst those present are a disgraced and ruffled colonel (Joe Flanigan from Stargate: Atlantis) and an overbearing Senator (genre veteran John Rhys-Davies) looking to cut funding to the project. And, yes, no sooner does a demonstration begin but things go horribly awry and the motley crew along with the building they're in are zapped . . . somewhere primordial populated by a frenzied alien / spider / dinosaur hybrid creature that roams the forests. The body count, in typical Maneater Series fashion, grows from there.

Ferocious Planet's half-cooked science fiction conceits are on a back burner here. What's up front and center is the cast of characters. The film basically has a few cardboard scientists, a few cardboard soldiers, and a few cardboard politicians - and they all do really stupid things as they struggle to survive in this alien landscape and concoct a way of getting back to our reality. The script doesn't take sides here. To give a couple examples of the juvenile humor on display, let's start with a scene where one of the politicians is cut in half by the creature described above. As the camera pans on his severed legs, someone remarks that he won't be running for reelection. Ba-dum-DUM. I also liked the conservative who is excited about the prospect of returning to our reality so that he can be a guest on Fox & Friends and tell the show's hosts about his experiences. An amusing side plot involving one of the dumb scientists' attempt to find intelligent life on the planet ends in a satisfyingly comic Twilight Zone manner.

So, is the journey to Ferocious Planet worth it? That depends upon your tolerance for SyFy programming in general. The comic approach made this Maneater entry a slightly fresher take on the usual cheap monster fare template. I'd say rent it if you're interested and don't have cable access. I might have actually recommended this turkey if it weren't for the disc's lack of extras (more on this below).

As a side note, I sometimes wonder if there's a fan base for the Maneater Series. I suppose there must be, given the line's longevity. The DVD line's website, currently updated through Ferocious Planet and sporting an amusing smorgasbord of audio soundbytes, may be found here. If you're still with me this far in the review, I can tell you that a quick Internet search revealed a new Maneater title - Roadkill - is on the horizons for August, though various sites report different release dates within that month. It does indeed look like more SyFy maneating monster mayhem is upcoming for whoever out there collects these films. 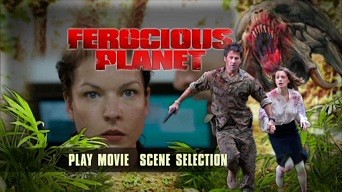 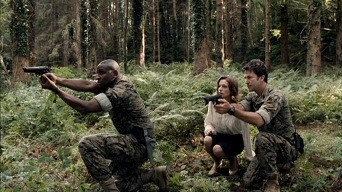 Vivendi Entertainment gives Ferocious Planet an anamorphic widescreen presentation that it claims "preserve[s] the aspect ratio of its original television exhibition." The image itself was satisfying enough, with sharp detail and vivid colors.

The lone audio track is an English language Dolby Digital 5.1 affair. Dialogue is always clear - although I thought the overall mix sounded slightly hollow or tinny.

Trailers for the aforementioned Roadkill and Behemoth precede the main menu. And that's it for extras; the only options in the menu are Play Movie and Scene Selection.

Ferocious Planet in most ways follows the genre clichés of SyFy Original Movies and the Maneater Series. However, the juvenile comic touches here kept me a bit more entertained than usual. Had Vivendi Entertainment provided a few extras, I might have actually recommended the film. Alas and alack. Rent it, if you're curious and don't have access to SyFy.