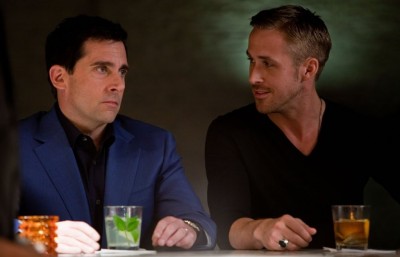 The best compliment I can pay the comedy "Crazy, Stupid, Love" is that it works extremely hard to maintain a vital oxygen blast of vulnerability to an otherwise stiflingly sitcom plot. Actually, there are numerous compliments I can pay this hilarious, poignant motion picture, which mounts a tremendous effort to keep the audience guessing, undermining as much formula as it can. It's a sharp movie, layered with impressive performances and a generous heart, yet it's the sensation of surprise that truly matters.

Cal (Steve Carell) and Emily (Julianne Moore) are a married couple facing divorce after Emily cheats with a co-worker (Kevin Bacon). Drowning his sorrows at the local bar, Cal happens upon fast-taking lothario Jacob (Ryan Gosling), a hotshot having trouble landing the girl of his dreams, Hannah (Emma Stone). Sensing potential, Jacob teaches Cal how to dress like a man and act around women, employing pick-up lines and a general shift in attitude to grow from schlub to stud, soon racking up a few meaningless conquests (including a feisty Marisa Tomei). While Cal is buried in style, he misses his old life, triggering misplaced affection from the family babysitter (Analeigh Tipton), who's fending off aggressive advances from Cal and Emily's 13-year-old son, Robbie (Jonah Bobo). 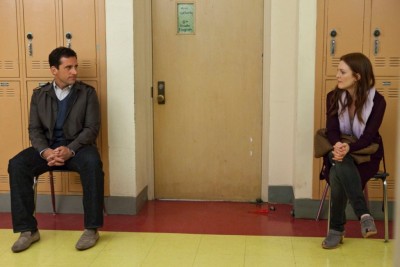 The screenplay by Dan Fogelman is a cat's cradle of distinctive characters all on the hunt for the elusive stability of love. Exploring commitment, desperation, and infatuation, the script winds around a community of hurt people confronting radical changes to their personal comfort zones. "Crazy, Stupid, Love" is a comedy, yet sustains an shrewd, frequently sobering observation on the challenges of marriage and the demands of passion, wrapped up into a reasonably formulaic script that loves to launch a decent punchline when the moment arrives.

In lesser hands, "Crazy, Stupid, Love" would've been rendered a disposable effort centered on broad examples of distress. Under the care of directors Glenn Ficarra and John Requa ("I Love You Phillip Morris"), the feature takes on a significant feel for these human beings, unafraid to explore genuine reactions of remorse and confusion, the best revealed through Cal and Emily, who use the unnerving steps of divorce to shock themselves back into reality. Pronounced sweeps of comedy are present with Jacob and his command of women and Cal (he's able to sweet-talk anyone into anything), yet the picture is rooted in sensitivity to critical issues of the heart. "Crazy, Stupid, Love" is actually better with intimate exchanges than cracking wise, fashioning believable characters who often find themselves in outlandish situations. 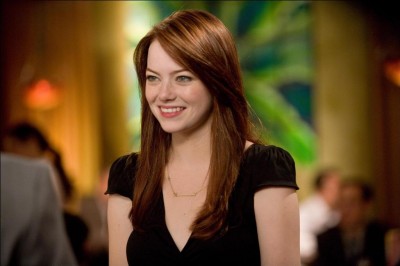 "Crazy, Stupid, Love" plays to the rafters in the final act, staging a literal showdown of love that's on the contrived side, yet articulated marvelously by the feisty cast. I laughed quite a bit during this picture. I also cared for these people, which is a rare event in the genre. Though flirtatious with artificiality, the film is grounded in reality, taking special aim to find the emotional truth at the core of all the clowning.