"Rio" doesn't break new ground in terms of animated entertainment for families, but what it does it does very well. A musical romp boasting an explosion of colors and an energetic range of voice actors, "Rio" keeps to a minimal plan of villains and personal triumph, summoning a charming, booty-shaking carnival ambiance where a bunch of crazy birds (as opposed to the angry kind) participate in some slapstick, adding to the riotous party atmosphere.

A thoroughly domesticated Spix's Macaw living in rural Minnesota, Blu (voiced by Jesse Eisenberg) hasn't learned how to fly, preferring an easy life on the ground with loving owner Linda (Leslie Mann, nailing a Midwestern accent). When ornithologist Tulio (Rodrigo Santoro) discovers Blu, he urges Linda to join him down in Rio de Janeiro, looking to pair the neurotic bird with Jewel (Anne Hathaway) and potentially save the species. Once acquainted, Blu and Jewel are separated from the safety of scientists, finding themselves chained together and sold to a black market bird seller. While Jewel hunts for escape and the freedom of flight, Blu is horrified by his new surroundings, encountering a kindly Toco Toucan named Rafael (George Lopez), a pair of party birds (Jamie Foxx and Will.i.am), and Luiz (Tracy Morgan), a helpful bulldog. Unable to fly, Blu struggles to locate Linda and return home, finding Nigel (Jemaine Clement), a malicious cockatoo, preventing an easy escape. 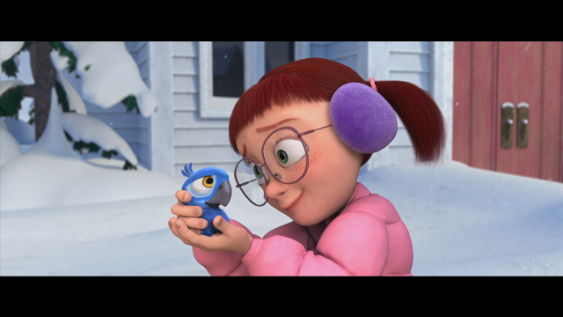 A vet of the CG-animated world, director Carlos Saldanha (the "Ice Age" movies) comes to "Rio" with a firm grasp of what he wants. The script is a basic assembly of hero's journey parts and anthropomorphized animal activity, doing nothing to challenge the genre, freely giving family audiences an experience they've enjoyed countless times before. The twist here is found in the execution, with "Rio" overcoming tired mechanics through a generous sense of visual and vocal life. The director clearly delights in this world of concerned birds and a most extreme example of cultural contrast, having the snowy serenity of Minnesota collide with the blitzkrieg percussive rumble of Rio during the raucous carnival celebration, further impeding the progress of our heroes.

"Rio" is a striking movie and I suppose that's to be expected with a film of brilliant birds and ornately costumed Brazilians. The production creates a vibrant setting in Rio, respecting the natural beauty of the land while amping the cartoon mood through bold character design and the sheer electric hold of a celebratory city. It's expressive animation that creates tremendous merriment and a touch of awe, with welcome attention to animal behaviors, extending to a group of thieving marmosets (Nigel's secret agents) and the drool-drenched Luiz, who desperately wants to party down with his bird buddies. Saldanha keeps the film frantic and fluid, taking to the skies and the dramatically softened maze of the city's favelas, constructing a madcap energy that's engaging, often taking attention away from the storytelling routine. 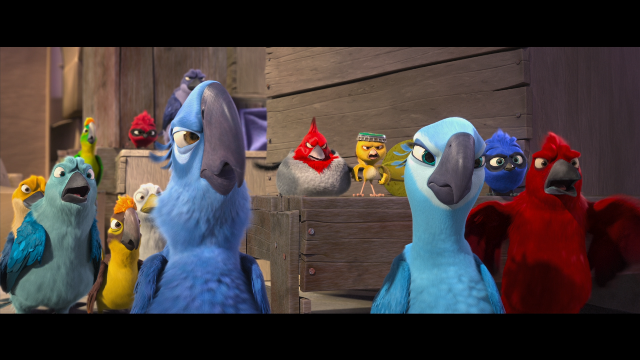 Voice acting also elevates "Rio," with a well-rounded cast of performers all contributing a unique sonic punch to the production. Eisenberg and Hathaway are especially manic as the not-so-love birds, bringing a combustible chemistry that makes for plausible romantic interest. Also creating a positive impression is Clement, who spins the villain role with a welcome snarky snarl, while also gifting the picture a memorable, cheeky song in a film that relies way too much on Foxx and Will.i.am (a curiously one-note performer) to bring a beat. It's a thin role of wicked obstruction, yet Clement introduces some eccentricity and wit to the picture. 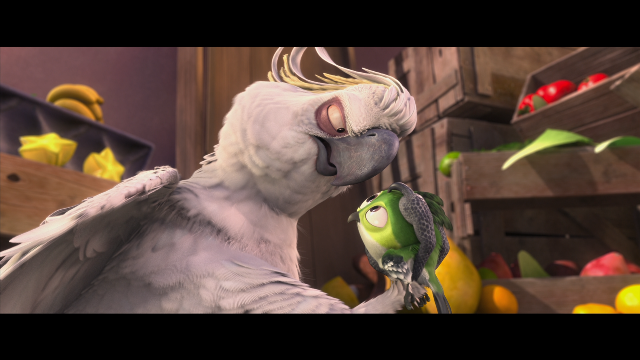 The AVC encoded image (2.35:1 aspect ratio) presentation is a stunning display of colors and lighting, sustaining the picture's festive mood with hues that pop right off the screen. Blues and reds are incredible, while golds retain magic during the parade sequences. Everything is crisp and clean, providing marvelous detail on the creatures and the locales -- there are many pauseable moments here of flight and crowd shenanigans that make the BD special. Blacks are solid throughout, free from any overt crush concerns. There's a small amount of noise detected. The animation looks beautiful here, full of life and texture.

The 5.1 DTS-MA sound mix keeps the cartoon celebration alert with a rich variety of dialogue and musical moods, most benefiting from a circular feel which keeps the environments fresh and the comedy alive. Verbal exchanges retain their intended squeak and velocity, with a satisfactory read of accents and intensity. Scoring cues and musical numbers sound full, with precise instrumentation and expanse. Atmospherics are energetic without overkill, filling out the animated antics with pleasing festival dynamics and environmental change. Low-end is present throughout, best with the percussive sway of the Rio city streets. DVS, Spanish, and French tracks are included. 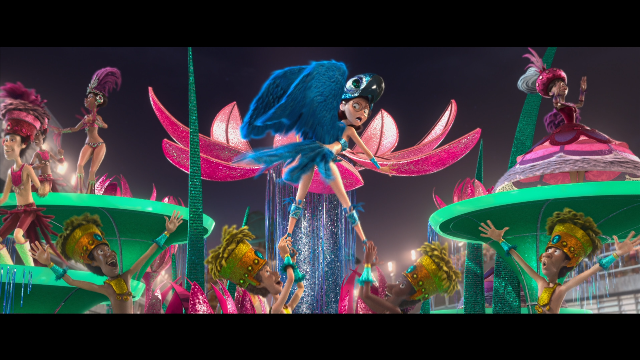 "Explore the World of 'Rio'" is an interactive map that provides a broad overview (primarily text and pictures) of the city's various environments.

"Saving the Species: One Voice at a Time" (24:49) offers time with the gifted voice cast, who sit down and describe the process of verbal performance. Talk of animation challenges and extensive visual planning is also included.

"The Making of 'Hot Wings'" (8:02) sits down with wil.i.am to discuss the creation of the musical personality of the picture, rooted in Brazilian sounds and life. Footage of the artists in the recording studio is offered, displaying the creative process.

"Boom-Boom Tish-Tish: The Sounds of 'Rio'" (13:30) chats with Sergio Mendes, the music supervisor for the film, who employed his considerable history with Brazilian music to infuse the picture with a sonic realism.

"Carnival Dance-O-Rama" (10:58) collects the main characters in a dance party of sorts, displaying instructions to help the viewer boogie along with the cast at home.

"Welcome to Rio" (1:37) is a music video featuring footage from the movie.

"Telling the World" (1:54) is a second music video, this time from Taio Cruz, who interacts a little with the cartoon cast.

"Rio De Jam" collects all of the musical numbers of the picture.

"Postcards from Rio" permits viewers to create their own Brazilian vacation message and save it here.

"The Real Rio" (9:31) interviews cast and crew for their thoughts on the city, with its varied environments and elements of life. Coverage of an animator scouting trip is also offered. 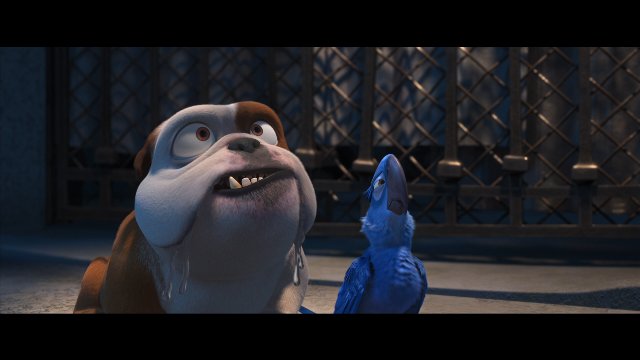 What "Rio" lacks in invention it makes up in presentation, generating an infectious, amusing adventure. It also treats rural Minnesota with some degree of respect and benevolent satire, which counts for something in my book. 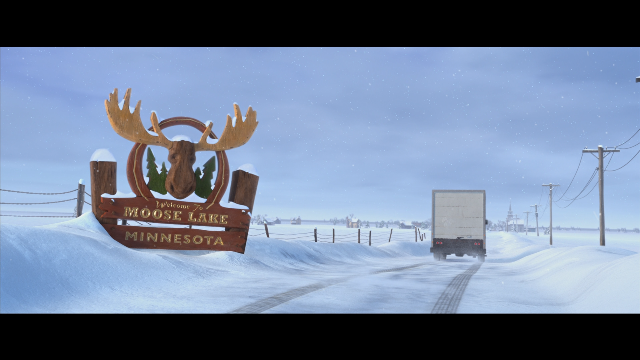