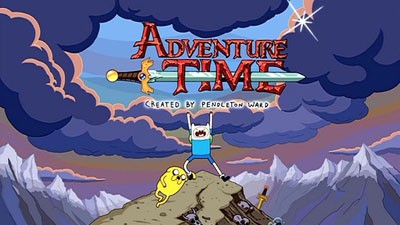 
The Show
Adventure Time is one of those shows I've always meant to check out, but never got around to it, mainly because I rarely watch Cartoon Network (preferring Boomerang's vintage offerings.) The show looked pretty interesting, with a unique animation style and enough oddness to fill a number of eye-catching promos. But, until this DVD, I've never actually sat down to give the show a chance to grab me. It took approximately 30 seconds though, or the length of the show's folksy theme song, for Pendleton Ward's baby to sink its venomous teeth into me and flow its feel-good poison through my veins.

The series centers on Finn the Human and Jake the Dog, and their adventures in the Land of Ooo, a fantasy world made up of various unique kingdoms, each ruled by a princess, including Princess Bubblegum, Lumpy Space Princess and Doctor Princess. Fueled by a need to adventure and fight, the twelve-year-old Finn battles any foe he faces, especially when someone needs help, and Jake, who can shape-shift to a limited degree, is always by his side. Most of the time they are looking for trouble or treasure, or trying to stop their archenemy, the Ice King, but occasionally they are just hanging out (and simply stumble onto trouble.) 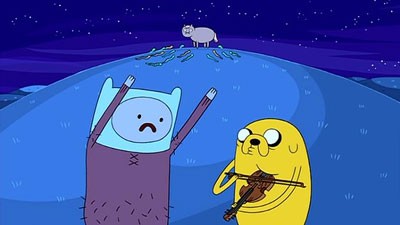 With John DiMaggio giving voice to the bizarre Jake (sounding not entire different from his Futurama character Bender), Tom Kenny appearing as the Ice King and a healthy dose of guest voices, the show supplements a strong main cast, plus the show's look is unique and adorable, making every episode a blast to watch. One episode, about a horse who stares at Finn and Jake, is so simple, yet the way the horse is presented made his every on-screen appearance draw a laugh. It may go for some cheap gags, about butts and farts and such, but when it earns those smiles there's no denying the effectiveness. I defy you to watch the Hot Dog Knights in "The Limit" and not laugh at least once. I have no problem admitting it was way more than that for me.

Though the show can be very silly, there's also a sense of heart to the proceedings, as seen in one scene where Finn and Jake are sitting looking at the stars, when Finn suddenly kisses a firefly, leaving a glowing ring on his lips. Something about it was just touching. At the same time, the show gets into serious WTF territory at many points. There's nothing inherently adult about the series, but the subject matter can get a bit mature, as the threat of death is pretty constant (and repeatedly fulfilled) and violence is more often the only answer to a problem. If anyone would like to explain just what the hell happened at the end of "Tree Trunks" I'm all ears. If it was a lesser show, episodes like that could possibly make one walk away shaking your head, but somehow it was simply another quirky bit of personalty for a show bursting at the seams with it. 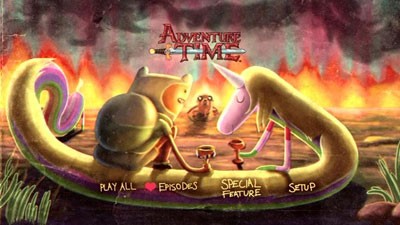 The DVD
Like Nickelodeon, Cartoon Network has decided to eschew orderly collections for scattershot, theme-less releases that pick and choose what to deliver to fans. In a white single-width keepcase (with a promotional insert that has the disc's gorgeous menu art on the flip side), this one-disc release offers up 12 seemingly random 11-minute episodes from across the show's first two seasons. The disc has a static, anamorphic menu, with options to play all the episodes, select shows and check out the extras. There are no audio options, but there are English SDH subtitles.

The Quality
The art style of Adventure Time would be right at home in any kids book, and this DVD does a nice job of reproducing the candy-colored world of Finn and Jake (including the beautiful title screens for each episode), though there are some noticeable issues with pixelation along thin black lines and compression artifacts in some of the large areas of solid color.

The Dolby Digital 2.0 audio is pretty standard for a basic cable kids cartoon, balanced between the two channels, without an problems with distortion.

The Extras
If you're hoping for genuine extras, "Little Did You Know" will disappoint you greatly, as it's just seven text screen with short bios about the show's featured characters. Though there's one or two cute jokes, it's mostly meh. 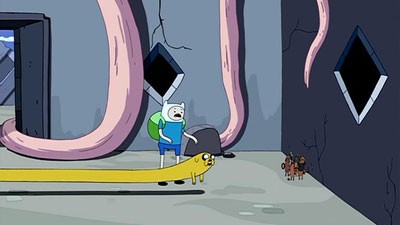 The Bottom Line
This series is adorable, surreal and fun, and can entertain young and old equally, an impressive feat that's probably the key reason it lives on the Cartoon Network and not its dark-hearted sibling, adult swim. While this somewhat short random assortment, presented in good quality with minimal bonus content, is fun to watch and might satisfy younger fans, more complete season collections are on the way, so you may want to stick with a rental for now.