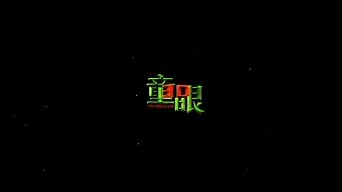 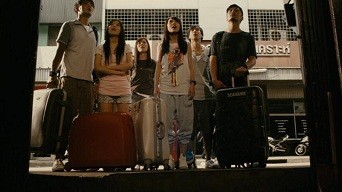 Over the last several years here at DVD Talk, I've started a number of reviews of Lionsgate titles by praising the distributor for releasing international horror films of note with respectable home video presentations. And it's good to see that they're still up to the challenge at the close of 2011. Out in stores nearly two weeks ago, the latest Pang Brothers horror opus in their "Eye" series was unveiled to American audiences - and while The Child's Eye is not one of the finer efforts by this Hong Kong duo, it's still worth a look for fans and the disc comes with at least one substantive extra (more than can be said for a lot of direct-to-DVD titles of late).

One of the noticeable aspects of this ghostly yarn is the number of shots clearly manipulated for 3D. I felt sure, minutes into the film, that this had to have been shown in 3D, as hands and bullets and chairs fly directly toward the viewer. And indeed, a brief Internet search uncovered that this had been exhibited theatrically in three dimensions. Well, not to disappoint anyone out there, but Lionsgate's disc is 2D only. I didn't mind, but if that's a dealbreaker for you, well then, reading this review was to your benefit.

Now that we've gotten the 3D issue off the table, let's move to the movie itself. The Child's Eye introduces us to three young couples from Hong Kong who are vacationing in Thailand. Unfortunately, the young vacationers are left stranded after demonstrators cause unrest, closing down the airport and effectively canceling their flight home. Unable to return to their luxury resort, they end up taking refuge at a run-down hotel populated by a limping madman and spooky orphans. Before you can say ju-on, ghostly goings-on begin to occur - culminating in the disappearance of the three guys. This leaves the three young ladies to uncover the mysteries of the hotel with the aid of an orphan and her ghost-sensing dog. 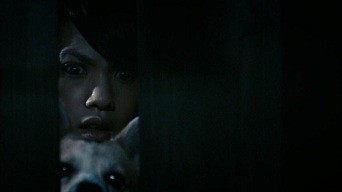 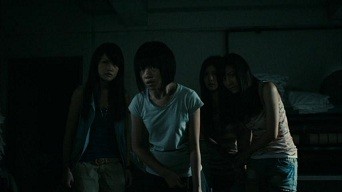 To start off with the positives, I liked the build-up in The Child's Eye. We're introduced to our heroine Rainie and her boyfriend in a scenic locale first, and the Pang Brothers - who also wrote the screenplay - put good effort into developing them and their four companions effectively. A little offbeat humor is plugged in to the first half that was welcomed. The Thailand demonstrations seemed out of place for a haunting film, but they were effectively staged. A lot of attention is paid to the old hotel itself - and it is spooky. One of the best bits in the film was also one of the simplest: an empty chair that moves while the sextet is dining in the hotel's cafeteria. And while I don't want to spoil things too much, a half-child creature that Rainie and her friends encounter is memorably pathetic in its design.

Having said all that, the movie kind of fell apart towards the end. The story's reveal of the ghost's origins are . . . well . . . not presented effectively, and its climax seemed rather unconvincing (not to mention the closing scene of the film, which felt tacked on and just plain dumb). The Pang Brothers resort to CG tricks a bit too much as well, with Rainie entering a spiritual dimension of ridiculous computer-generated qualities to find her friends near the conclusion.

Despite that, I was glad to see The Child's Eye receive a release Stateside - and while I think this movie may divide fans of the Pang Brothers and Asian horror in general, I'd still recommend it to them. If you're unfamiliar with this series, though, I'd suggest starting with the original The Eye from 2002. It's better than this. 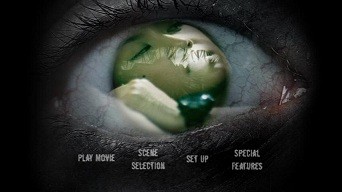 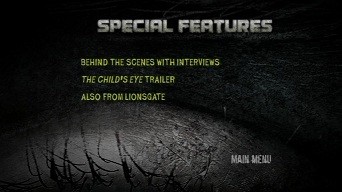 Lionsgate gives The Child's Eye an anamorphic widescreen presentation with a 1.78:1 aspect ratio. Details are sharp and clear - with various scenes deliberately dark or tinted. I suppose I ought to reiterate here that only a 2D version is available - sorry, 3D fans.

Preceding the main menu are trailers for Camp Hell, Blood Night: The Legend of Mary Hatchet, The Eye, and Psychoville, as well as ads for break.com and epix. They're all made available, collectively, in the Special Features submenu along with an additional trailer for The Child's Eye itself.

The other extra here is a featurette titled Behind the Scenes with Interviews of Cast and Crew (25:17) which provides exactly what the title suggests. This extra is widescreen but nonanamorphic, with yellow English subtitles. It's fairly more in-depth than typical fluff promotional extras, so kudos to Lionsgate for providing it.

I was glad to see Lionsgate release the Pang Brothers' latest horror opus The Child's Eye, even if this haunting film doesn't hit quite the same level as some of their other work. The disc is a 2D presentation only, but it does offer a fairly in-depth half-hour featurette on the making of the movie. Recommended for the Asian horror fans out there, though some may be put off by the overt 3D scares and disappointing ending.