Art of Filmmaking, The 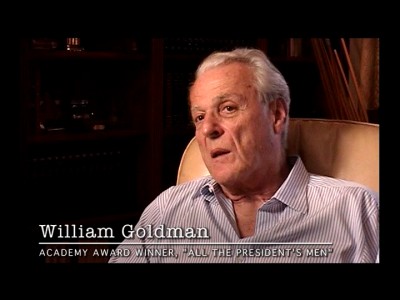 It could more accurately be called The Artists of Filmmaking, and even that might be something of a stretch. Personalities of Filmmaking, perhaps? That is not to say that The Art of Filmmaking doesn't contain some real nuggets of insight into the actual process of filmmaking and how the medium might be recruited to artistic aims. But make no mistake, none of the five almost entirely unconnected documentaries compiled, grab bag-like, in this entertaining set have much at all in common with great documentaries-about-filmmaking like Craig McCall's Painting with Light or Scorsese's Personal Journey Through American Cinema. Instead, with some significant exceptions (more on that below), what we have here is an abundance of subjective, even gossipy anecdotes from a narrow but dominant site of filmmaking, Hollywood, with markedly less description (and even fewer glimpses) of the actual process. It gives us an earful, but it's more People magazine sound bites than any sort of in-depth or applicable handbook. 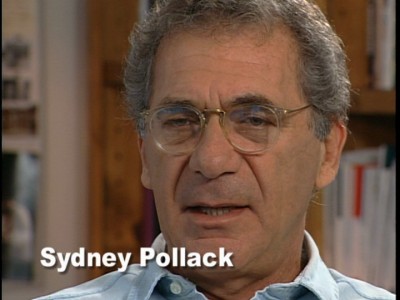 The bulk of the set's running time is given over to the two-disc "interactive" program Directors: Life Behind the Camera and Peter Hanson's 2009 documentary, Tales from the Script. Directors is a huge, four-hour compendium of clips from interviews, conducted in conjunction with the American Film Institute, that boasts an odd yet gratifyingly disparate chorus of directorial voices ranging from the most status-quo mainstream (Ron Howard, Nora Ephron, Frank Darabont) to the "artier" side of that coin (Scorsese, Oliver Stone, Lawrence Kasdan) to, on the furthest artistic edge that this conversation is willing to tiptoe up to, Robert Altman and David Lynch. What makes the program "interactive" (and not, technically speaking, a movie) is that you can choose the interviewee and topic you want from a menu that pops up automatically upon insertion of the disc, or you can choose to "play all directors" for any given topic. (Topics range from getting your foot in the door to dealing with actors and producers.) The latter option renders the experience more interesting and diverse, and you can actually get more out of it if you don't just stick to the directors whose work you admire. (Biggest surprise: Garry Marshall (Valentine's Day), though he has nothing especially useful or intelligent to say about "the art of filmmaking," can tell a story and is a million times more affable and amusing than any selection you could name from his smiley-faced body of work.) Tales from the Script, which features mostly talking-head interviews with a seasoned though not terribly illustrious group of screen scribes, including Lethal Weapon mastermind Shane Black, Ghost writer Bruce Joel Rubin, with the most accomplished and interesting voices, artistically speaking, being those of William Goldman (All the President's Men), John Carpenter (Halloween), Billy Ray (Shattered Glass), and the great Paul Schrader (Taxi Driver) is really only fascinating in the same manner as a car wreck. Not that it's at all badly put together; but this parade of screenwriters, whether it's the aforementioned group or one of the film's multiple ponytailed, showbiz-speak-spouting true-life stereotypes of a Hollywood screenwriter, cannot come up with one single story that makes fictional Hollywood nightmares like The Player or Mulholland Drive look like anything other than the most fact-based docudrama realism. There also is not much that can be said in interview snippets like these that can cast any illumination on the difficult, solitary craft of writing (other than to confirm that it is, indeed, more difficult and solitary, and not anything like as glamorous, than neophytes might imagine). Tales from the Script is not a guide of any sort so much as it is a verbally-related atrocity exhibition that keeps us watching in a state of slack-jawed, half-ashamed and half-awed disbelief at the deep emotional trauma that is being a screenwriter in Hollywood. 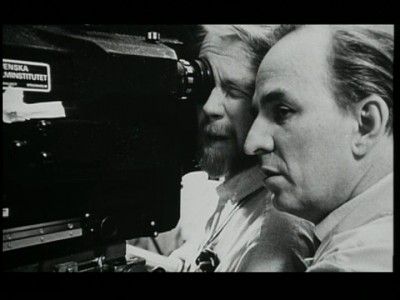 The Art of Filmmaking's middle ground is occupied by Light Keeps Me Company, a 2000 documentary on the late, great Swedish cinematographer Sven Nykvist (countless Bergmans, Woody Allen's Crimes and Misdemeanors, Tarkovsky's The Sacrifice, to name but a few; he's easily the greatest figure of the set) by his son Carl-Gustav. It's a loving portrait that includes invaluable private footage of Nykvist, and an equally loving tribute from his collaborators and colleagues (everyone from Allen and Bergman to Liv Ullmann, Susan Sarandon, Everlasting Moments director Jan Troell, and even Melanie Griffith (!) chimes in with a good word), but it's dragged down by a sappy, over-utilized score and a banal device in which passages from Herman Hesse's Siddhartha (apparently Nykvist's favorite book, from which he made a film in 1972) is read in voice-over. 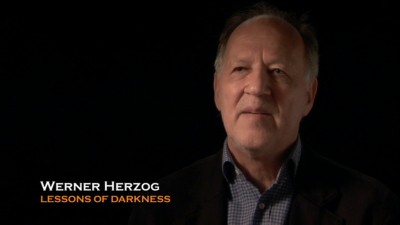 Probably not all that surprisingly, the richest and most enlightening entries here are the least-known quantities: Pepita Ferrari's 2008 film, Capturing Reality: The Art of Documentary Filmmaking, unlike The Art of Filmmaking as a whole, lives up to the "art" in its title, actually showing us clips from the work under discussion (which Directors and Tales from the Script conspicuously fail, for the most part, to do) and letting the documentarian interviewees--from legends like Albert Maysles (Grey Gardens), Patricio Guzman (Nostalgia for the Light), and Errol Morris (Tabloid) to acclaimed relative newcomers such as Jennifer Baichwal (Manufactured Landscapes) and Kevin McDonald (Touching the Void)--explain, at length and in some significant detail, their actual techniques and processes, in addition to their tales of personality clashes and artistic ambitions. 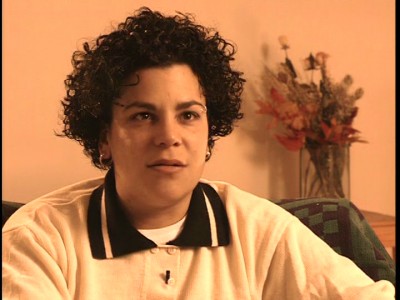 I was expecting the least from Marc Mauceri's Lavender Limelight: Lesbians in Film, an hour-long documentary from 1997, when a "wave" of films by and about lesbians was supposed to be in the offing, so I was taken aback by the degree of articulation and insight on display. This is the oldest work included in The Art of Filmmaking, and it acts at the present moment as something of a time capsule: filmmakers like Rose Troche (1995's Go Fish, lately director/producer on TV's The L Word), who has had a lasting presence in the ensuing years, as well as Jennie Livingston (1990's Paris is Burning) and Maria Maggenti (1995's The Incredibly True Adventures of Two Girls in Love, a picture I recall as overly innocuous and awkward, but which Maggenti speaks about in such convincing and thoughtful terms that I was almost, almost tempted to revisit it)--neither of whom have been heard from much since their sole features--speak about the particular burdens, expectations, and misunderstandings that come along with being a "lesbian filmmaker," in addition to their individual journeys toward sexual and artistic identity.


The Art of Filmmaking is essentially a compiled re-release of previously available DVDs, and the visual quality is uniformly somewhat retro, as if they were initially released before First Run Features, their distributor, had the access or inclination to do a higher-grade transfer; hence, only Capturing Reality has what you could call a high-quality transfer. For most of the other titles, originally shot on analog old-fashioned videotape, the lower-grade visual quality is not a real problem, and they look good enough--if somewhat muted, flat, and bland, as per all our bad old memories of videotape--to be passable. The glaring exception here is Light Keeps Me Company, which includes should've-been-mouthwatering clips of Sven Nykvist's gorgeous images from multiple great films, all of which deserve much, much better than the horrendous, dark, splotchy/grainy appearance they are given here; they seem not to have been done justice even upon their initial interpolation into the documentary itself, let alone on the film's subsequent transfer to DVD. All the films in the set are presented in non-anamorphic/letterboxed widescreen or 4:3 aspect ratios, other than the anamorphic-widescreen Capturing Reality.


The sound is generally adequate, if rudimentary, plain stereo. Most of these films consist of talking-heads interviews that really only require clear and undistorted recording and presentation of one person's dialogue, which is done without fail across the board, though the most technologically advanced, Dolby surround-level sound is clearly that of Capturing Reality, most likely by dint of its being the most recent release among the titles rather arbitrarily packaged together here.


Most of the extras are just on-screen text biographies/filmographies (Sven Nykvist's works are listed in the extras of Light Keeps Me Company, for example). Otherwise, the most generous and notable bonus feature is an additional hour or so of interviews from Tales from the Script, which, if you are a screenwriter in any capacity or just not in the mood for some serious schadenfreude, may actually drive you to suicide. (Otherwise, it's a guilty pleasure to listen to yet further tales of humiliation and despair from deep in the bowels of Hollywood scriptwriting hell).


All of the films in The Art of Filmmaking, aside from the somewhat more visually interesting Light Keeps Me Company and, especially, Capturing Reality, share a similar, videotaped-talking-heads style that would not be out of place on PBS (not necessarily a bad thing, to my mind). That swivels the spotlight squarely over to the films' content, which, due to their being packaged together by their distributor, First Run Features, more as a matter of convenience than of true thematic commonality or consistency, varies crazily from one to the other, from trashy-fun (Tales from the Script, much of Directors) to more seriously inquisitive and insightful about the actual titular art (Capturing Reality). Still, there aren't too many moments that fail to offer up at least some charm or diversion, however throwaway; and, though they're quite a bit fewer and farther between than the title misleadingly suggests, there are even some scattered tidbits of information and wisdom that might be of real use and interest to aspiring filmmakers and cinephiles alike. Recommended.