MPI Home Video // Unrated // October 4, 2011 // Region 0
List Price: $129.98 [Buy now and save at Amazon]
Review by Stuart Galbraith IV | posted October 28, 2011 | E-mail the Author
You're going to want to get this. A chronologically presented boxed set featuring every surviving, live-on-kinescope "Honeymooners" sketch performed on the Dumont Network's Cavalcade of Stars and, later, on CBS's The Jackie Gleason Show, MPI's The Honeymooners - Lost Episodes, 1951-1957 is one of this year's Best DVD Boxed Sets.

For decades, fans of this all-time great sitcom had been limited to the "Classic 39," the half-hour Honeymooners episodes shot on 35mm film during the 1955-56 TV season. Essentially spun-off from The Jackie Gleason Show, that incarnation of The Honeymooners had an incredible if short run, with one hilarious show after another. The 39 episodes shot that season were quickly put into syndication, and became a fixture of UHF stations across the nation for decades. But even Gleason himself, in a press conference explaining why he chose to release the live episodes, slyly admitted "I'm sick of watching those other Honeymooners" over-and-over again. And so he and, later, his heirs, gradually licensed Honeymooners skits performed both before and after the Classic 39. These so-called "Lost Honeymooners" (which never were lost; Gleason knew were they were all along) began airing on Showtime in 1985. All of that material is included here - and much, much more.

A big brick of a release with approximately 50 hours of material spread across 15 discs, The Honeymooners - Lost Episodes, 1951-1957 includes 30 new-to-DVD episodes, some of which haven't been seen publicly since 1957, some 54 years ago. Also included is an entire disc of extra features: rare radio episodes, commercials, spoofs, color home movies on the set, an interview with co-star Joyce Randolph, scripts for three of the missing shows, and lots more. If you're a fan of The Honeymooners - and just why wouldn't you be? - this set is as exciting as digging up Captain Flint's buried treasure chest. 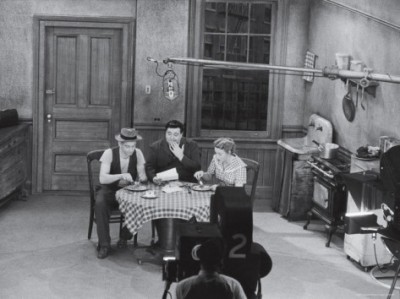 For the uninitiated: Jackie Gleason stars as Ralph Kramden, a lowly driver for the Gotham Bus Company who lives in a run-down apartment in Brooklyn with his attractive but long-suffering wife, Alice (Audrey Meadows). Ralph's best friend is Ed Norton (Art Carney), an eccentric sewer worker who lives one floor up with his wife, former burlesque dancer Trixie (Joyce Randolph).

The Honeymooners broke from the standard sitcom formula in numerous ways. For one thing the Kramdens were indisputably poor. Their apartment was small and shabby. They had no telephone, no TV, and had a beat-up icebox instead of a modern refrigerator. (These were items even relatively lower-class income families generally had by the mid-1950s. By the last Honeymooners shows of the 1970s this unchanged setting was unbelievable yet too iconic to tamper with.) A testament to the extremely high level of the writing is the fact that only occasionally does The Honeymooners leave that simple set. Entire shows often play out in that one room.

Ralph dreams of becoming a big shot, partly to provide his wife with the kind of luxuries he's had to deny her. But Ralph is also a perennial loser: unsophisticated and lacking in the social, networking skills that might have got him a higher-paying job.

He also had a temper, and constantly belittles and browbeats Alice, threatening to send her "to the moon" if she acts up. A good friend of mine always hated The Honeymooners for this reason - "What's funny about a guy threatening to hit his wife?" she asked - not realizing that deep-down Ralph was a child-man full of hot air, while Alice could more than take care of herself. When push came to shove she wore the pants in that family and could hold her own in any argument.

What makes The Honeymooners so funny is its core emotional verisimilitude. It's as much a show acknowledging the pains of poverty and embarrassing failures that many of us endure, and admitting to the often volatile, contentious relationships even among the most happily married couples. This is especially evident in episodes like "Boys and Girls Together," in which Alice's understandable resentment toward Ralph, and Ralph's obvious selfishness and insensitivity, is expressed more honestly than most TV dramas.

Although The Honeymooners has its share of hysterical slapstick-type humor - Who could forget Ralph and Ed's appearance on live TV, selling their Handy Housewife Helper, one of the best of the "39"? - most of it is rooted in Ralph's endless frustrations of daily living.

And sometimes the Ralph's pain overwhelms even the comedy. (Spoilers) In "The Adoption," the Kramdens' attempt to adopt a baby, but both are genuinely ashamed of their run-down home believing it will disqualify them as candidates. They finally do get their baby, only to have the birth mother change her mind weeks later, after Ralph and Alice have fallen in love with the newborn. If that show doesn't choke you up, you've got a heart made of stone.

The 107 complete Honeymooners segments are wisely presented in chronological order, with the still-missing shows helpfully noted in the fat booklet accompanying the disc. Watching them in order is quite enlightening, as many sketches were remade later on: in this set you'll find multiple versions of sketches about Quiz Shows, Halloween and Christmas parties, for instance. Other episodes anticipate storylines later refined for the Classic 39. "Teamwork Beat the Clock," for instance, is like a dry run for "The $99,000 Answer," with the earlier version awkwardly teaming Ralph with Alice.

After the Classic 39 aired, Gleason & Company returned for one more season of Honeymooners sketches with its best-known cast: Gleason, Carney, Meadows, and Randolph. For the last-half of the 1956-57 season of The Jackie Gleason Show, the four characters win a European vacation and The Honeymooners became out-and-out musicals, 50-minute extravaganzas with nearly Broadway-worthy songs and dancing. When Gleason revived The Jackie Gleason Show in 1966, he also revived The Honeymooners, again with Art Carney but without Meadows and Randolph (their roles recast with Shelia MacRae and Jane Kean, after Meadows declined moving to Florida where the series was being filmed). The 1966-67 Honeymooners remade those long-unseen 1957 musical shows and are nearly identical much of the time.

The set also includes the eight surviving episodes of Cavalcade of Stars featuring Gleason, Carney, and a very young Randolph but with Pert Kelton as Alice. By the time the series moved to CBS, Kelton had been blacklisted and replaced. Nearly a decade older than Gleason, she's okay, but Meadows is better suited to the part, prettier yet also tougher than Kelton, and her chemistry with Gleason is notably better. (Gleason clearly admired her talent though, bringing Kelton back to The Honeymooners years later as Alice's mother.)

The Honeymooners - Lost Episodes, 1951-1957 presents its shows over 14 single-sided discs, with Disc 15 reserved for the special features. The set comes packaged in a plastic, book-type case with fragile, clear plastic "pages." Mine arrived with several pages cracked and damaged, though it has managed to hang together since then. The episodes are, of course, kinescopes with a film camera recording the image from a video monitor, so the quality varies and never approaches the look of the shot-on-film "39", but all are highly watchable and many look surprisingly good, considering. The sketches vary in length, from 10-12 minutes upwards to around 50 minutes. Many first re-aired on Showtime and later were made available on home video, but quite a few are new discoveries, including one located just this year. The region-free discs offers decent 2.0 mono sound with no subtitle options.

Bonus material includes two featurettes: "The Lost Episodes Story," a good overview with TV historian Dan Wingate; and "All About Trixie: The Joyce Randolph Interview." They're informative and charming. "The Norton Interviews" consists of six skits with Carney in character as Ed Norton, being interviewed by Ed Sullivan, Robert Q. Lewis, and Gleason himself (as Jackie Gleason, not Ralph Kramden). Two radio episodes, dating from 1954 and running 35 and 28 minutes, feature the original cast. Scripts for three shows - "Easter Hats," "Alice's Birthday," and "Missing Pair of Pants" - are not PDFs but rather reproduced onscreen in step-frame format. On large TVs the scripts are easily readable but may be less so on smaller monitors.

Additional sketches and commercials include amusing oddities like "Art Carney Receives Award from Sewer Workers" and, oddest of all, a parody sketch from 1955 featuring Peter Lorre as Ralph, Red Skelton as Ed, Mary Beth Hughes as a Vampira-like Alice, and Muriel Landers as Trixie. Lorre's imitation of Gleason's character is priceless.

Another parody has Jack Benny as Ralph, Dennis Day as Ed, and Audrey Meadows as Alice. Oddly, this is almost a legit remake of a Classic 39 show, "A Dog's Life," and Benny's imitation of Gleason is uncannily accurate, if funneled through Benny's own persona. A few commercials are included, such as Meadows pitching Chesterfield cigarettes: "I go for the King Size," she says. "I'm a gal who really enjoys her smoking!" (Meadows died of lung cancer at 74.) Another features Carney pitching Nescafe.

What a set! Producers Robert S. Bader and Jim Pierson deserve mention for doing such an especially fine job with this, one of the best DVD releases of the year and easily a DVD Talk Collector Series Title.