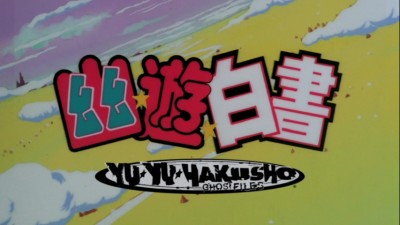 If you are bothering to read this review, I imagine you already have some degree of fandom for the wonderful Yu Yu Hakusho anime series. The show focuses on Yusuke Urameshi, spirit detective, and his friends Kuwabara, Hiei, Koenma, Kurama, and Botan. The group works together to take down evil spirits from the demon world when those demons have entered the human world in order to cause total chaos. Yusuke sacrificed his life early in the series to save another and was given the opportunity to return to the living as long as he helped to use his strength in a worthwhile way by helping to protect and save others. Before this moment he was thought of as a bit of a rebel. Yusuke was probably thought of as a rebel after facing down these startling events anyway though. If you are completely unfamiliar with the series it's best to start at the beginning of the show (each of the four seasons is available on DVD or Blu-ray). Yu Yu Hakusho remained a well-made action series with a surprising emphasis on character-development and interesting thematic material that is uncommon for a series of its genre and it remained that way until the satisfying ending.

Much like the series itself, Yu Yu Hakusho's "The Movie" is a nice, entertaining, and cool experience. The downside to this is that it stands as comparable to the mid-range level achieved by any given episode of the show and the length is so unbelievably short that viewers will have a hard time considering this an actual film. It's the exact same length given to any episode of the series with a total run-time of 25:09. Yes, twenty five brief minutes of more Yu Yu Hakusho. The film even duplicates the exact same opening and ending credits used on an episode of the series. 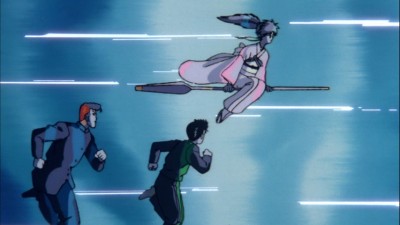 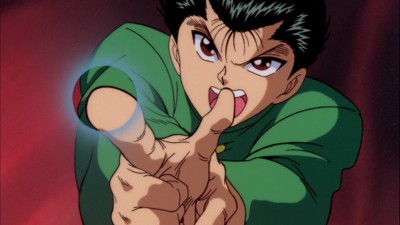 "The Movie" has a really straight-forward story that focuses on Koenma being kidnapped. It's up to Yusuke and the rest to get him back and save the day for both the human and spirit world. It's a straightforward story for the most part. There aren't any big surprises and the ending is unsurprising and resolves the plot almost as quickly as it began, but it does manage to entertain as a light Yu Yu Hakusho story. It's basically a small side-plot without any connection to the main events of the show and can be viewed at any time.

This collection is designed and aimed towards fans only. If you have an understanding and familiarity with the series already then there's no doubt that there is already some strong interest in checking out the release to see what Funimation has in store for fans. Or else, there's no real reason to watch the movie or anything else on this release.

The Eizou Hakusho episodes are misleading to everyone. I expected to see a series of side stories that would help to expand upon the show and add an extra element of fun. Instead, these episodes are mere clip-shows (featured only with Japanese Stereo) and aren't made with much enthusiasm. The clips have no coherent narrative in shifting from any one scene into another and it doesn't add up to a good viewing experience for anyone. New viewers of Yu Yu Hakusho won't gain anything from the episodes (besides poorly unveiled spoilers) and long-time fans will find the entire collection a massive bore with nothing to add to the great series. The total running time for these yawn-inducing clips is 2:05:38. The episodes which focus on specific character have a few minutes of new animation but the production quality was notably poor when compared to the actual show. 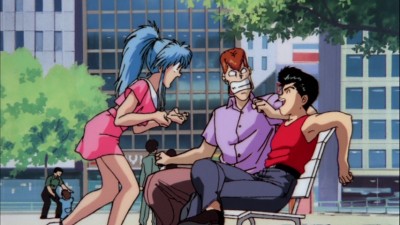 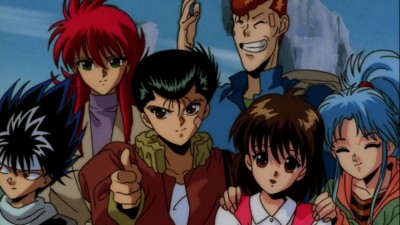 Eizou Hakusho is divided into six episodes and can also be viewed with a play all feature.

The picture quality is easily disappointing, and not only because there isn't a high definition option allowing for this material to accompany the season sets released on Blu-ray. There's some terrible cropping to the Yu Yu Hakusho movie. It should have been in 4:3 full frame, but it's in 16:9 anamorphic widescreen instead. The image doesn't look quite right and it's not what should have happened on this release. Then there's the picture quality for Eizou Hakusho and the bonus materials. Those are presented in 4:3 for the most part, which is accurate, but the image is often out of focus and with poor color reproduction. There can easily be a case made for too much print damage to most of the material. The Movie had bright vivid colors and nice detail despite the cropping but everything else on this release barely qualifies as having even moderate-level quality throughout the presentation.

The 5.1 Dolby Digital Surround Sound included for the Yu Yu Hakusho movie is a well done, decent production. It was nice to get to hear the original English dub cast back together in one more show. The Japanese Stereo tracks on these discs are in poor shape and are not anywhere near the same level of sound reproduction. English subtitles are included.

Before writing the review for this release I debated about putting every element of the release in the extras section. The entire point of this DVD set is definitely supplemental.

Scenes from the Dark Tournament (2:35) is essentially short clips that weren't included during the Dark Tournament saga. The animation is poor so I assume these are scenes made after the show's completion. Each small piece feels sort of like similar to what is typically included on a blooper reel.

Nightmare Hakusho (9:45) is a small collection of mini shorts that put the characters beloved throughout Yu Yu Hakusho into mildly amusing and comical pieces. The clips seemed cute and interesting enough but don't really stand out as essential viewing.

Anti-Piracy Clips (2:03) has the four main characters delivering some audio-delivered messages "in character" about why piracy is bad for the show. Who knew that Yusuke, Kuwabara, Hiei, and Kurama are concerned with Yu Yu Hakusho's media sales? These altogether brief segments are actually pretty funny and well done with the English dub. 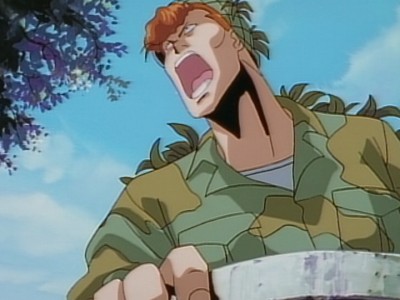 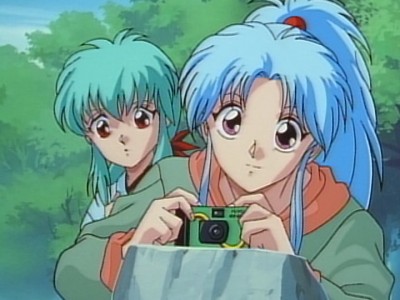 Yu Yu Hakusho Opening and Ending Encyclopedia (21:01) contains all opening/ending credits along with some brief new footage that occurs after the end of the series. It's certainly nice to see some new material and to know that all is alright for these great characters but like most of the content on this release it doesn't necessarily seem as essential as some might hope for new material based within the show.

Textless credits for the opening "Smile Bomb" and ending "Sayonara Bye Bye" are included, although both are cropped to anamorphic widescreen. There is also an audio only alternate rendition of the "Sayonara Bye Bye" song as sung by the English voice actor who portrays Yukina.

Lastly, a "Vintage" Yu Yu Hakusho Trailer which is actually just an old Funimation trailer and not even a very good one at that. I was sort of hoping to see a vintage trailer made before the series arrived on Japanese television. 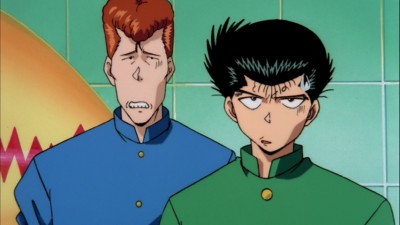 Yu Yu Hakusho is one of the best supernatural-action anime series ever made. It features great characters and it manages to stand the test of time. Unfortunately, this new release containing a "Movie" and "Eizou Hakusho" doesn't fully deliver. The film itself was decently made but no longer than a single episode. The Eizou Hakusho segments are just clip-show filler. The actual extras are also somewhat sparse considering the relatively high pricing on this collection. Any diehard fans of the series are encouraged to rent this release, while moderate fans and newcomers shouldn't bother with this overpriced release at all. Skip It.