Collections of animated shorts can be a tricky proposition. So many animators around the world working on so many things means that you're likely to come across both mini masterpieces and inscrutable head-scratchers - even within the same program. But that's part of the fun of it, right?

Nine Nation Animation is one such set. Compiled by Brooklyn, New York-based organization The World According to Shorts, the DVD culls nine different animated shorts that have played in various recent film fests such as Cannes and the Berlin International Film Festival. Many have garnered awards and critical acclaim, which at least gives this set the patina of respectability lacking in your garden variety "check out these wacky shorts" collection.

Although the back of Nine Nation Animation's box trumpets "nine animated shorts from around the world," nearly all hail from Europe, with the trippy The Tale of How from South Africa being the only exception. The films all share a vaguely European sensibility, but they're also wildly inventive. Even the ones that aren't as successful prove that the art of animation is thriving well beyond the cookie-cutter CGI stuff that Hollywood cranks out. 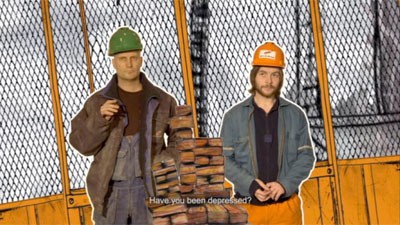 Deconstruction Workers
Kajsa Naess, Norway, 6 min. Two construction workers have a serious discussion about life.
This film falls into the "head scratcher" category, although the two men having a casual confab while rioters erupt and their worksite is crumbling into decay has a dry, appealing bite. The visuals are driven by digitally manipulated photos, to chaotic effect. 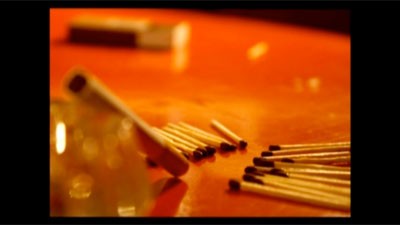 Average 40 Matches
Burkay Dogan, Turkey, 3 min. A group of matchsticks work together to satisfy their craving for cigarettes.
Shortest and most Old School of the films, this brief bit of whimsy is sparked (literally) by homey photography and stop-motion animation. 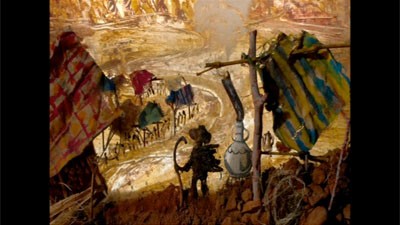 Bamiyan
Patrick Pleutin, France, 15 min. In 632 AD, the Chinese monk Xuanzang discovers the statues representing Buddha in the valley of Bamiyan, Afghanistan. In 2008, the children of the valley tell us the myths about the tragic destiny of these statues destroyed by the Taliban in 2001.
The intriguing story in this gorgeous piece is told with sand, mud and other natural materials manipulated on panes of glass. I was wowed by the artistry (which calls to mind those old Sesame Street segments with letters and numbers drawn in sand), even if the ending was vague and unsatisfactory. 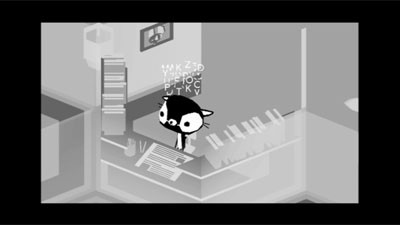 Please Say Something
David O'Reilly, Ireland/Germany, 10 min. A troubled relationship between a cat and a mouse set in the distant future.
A Krazy Kat/Ignatz Mouse style partnership is brought into the digital age in this coldly rendered yet touching winner. The film goes through various imaginary scenarios in the two critters' lives (the cat loses the mouse's scarf, the mouse gets annoyed with the cat while trying to work) in a manner reminiscent of early computer graphics. Cute sound effects and score, too. 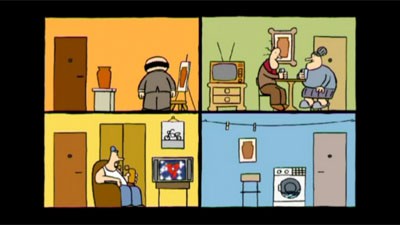 Flatlife
Jonas Geirnaert, Belgium, 11 min. Hanging a painting on the wall, building a house of cards, doing the laundry, and watching TV: the most innocent and harmless actions in the daily lives of four ordinary people. But of all the bad luck, these people had to live next to each other.
This film takes on the peculiarly European situation of neighbors in close quarters dealing with each other, but the situations are of the sort that anyone could identify with. What makes it work is the simple setup, which basically keeps the action focused on four rooms in the flat. The gags and animation in Flatlife are more traditional, but I found it sweet and charming. 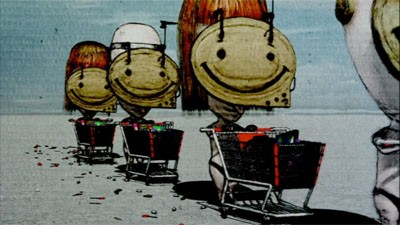 She Who Measures
Veljko Popovic, Croatia, 7 min. Are we truly free? Are our desires truly our own or merely imposed products of the society we live in?
Beautifully crafted, surreal film takes on American-style consumerism in a rather heavy handed way. I give the filmmaker credit for hinging the film on the wild imagery of big-headed puppet people marching in line with full shopping carts, led by a menacing giant clown. 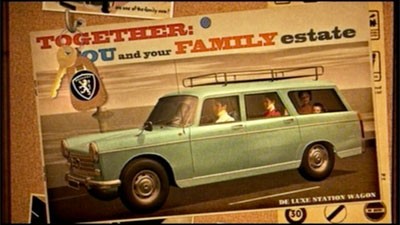 Home Road Movies
Robert Bradbrook, United Kingdom, 12 min. "No longer restricted to Zone 3 of the local buses, our dad took us on motoring holidays of a lifetime." The real-life story of a shy and awkward father who desperately wanted the family car to make him a better parent.
This film was very successful in merging autobiographical detail with a snazzy visual style. The character of the father is a filmed actor, while his family members and surroundings are vintage '60s/'70s photographs, digitally filtered through a yellowed haze of suburbia and the shallow promises of advertising. The film is very stylized (and very British), and yet the figure of the well-meaning yet emotionally distant dad comes through vividly. 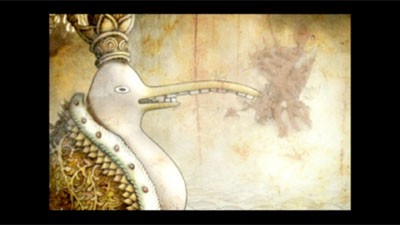 The Tale of How
The Blackheart Gang, South Africa, 4 min. The story of the Piranha birds - or Dodos, as they would be known to you.
This unapologetically strange film uses baroque imagery and seasickness-inducing camerawork to tell a story of strife in a mythical bird kingdom. With an operatic score. 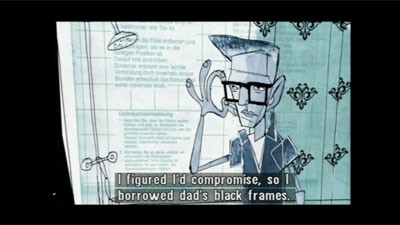 Never Like the First Time!
Jonas Odell, Sweden, 14 min. An animated film based on documentary interviews, where four people get to tell the story of their first time.
In voice overs, four Swedish people of varying ages recall when they first had sex. This was a visually stunning piece, with the four stories are told in differently animated methods ranging from stylish, inky drawings to minimalist outlines on photographs. Like Home Road Movies, this was another film that has a wonderful European flair while dealing with a subject that's identifiable to most everyone, kids and celibates excluded.

The DVD is supplied with a single audio track, mixed in rich stereo. Several use English as the spoken language, surprisingly. Those that don't sport subtitles that are burned onto the image, an annoyance for those who'd like to enjoy the imagery sans text.

Like you'd expect, the video quality is a mixed bag. Some shorts (She Who Measures, Home Road Movies, bonus short The Runt) are presented in anamorphic widescreen with a gorgeously balanced picture. Others (Please Say Something, Flatlife, Never Like the First Time!) have their widescreen-proportioned images windowboxed with black around all four sides, for no good reason. The picture on Flatlife and The Tale of How also suffers from a slight blur.

A bonus short, The Runt, is the disc's sole extra. This 10-minute film from Germany's Andreas Hykade is a brightly rendered tale of a boy who decides to raise a runt rabbit on his own, despite the warnings of his father and uncle. The oil pastel imagery has a lot of charm and character, despite a plot that is beyond gloomy (and not suitable for young kids!).

Despite their iffy presentation on the DVD, Nine Nation Animation is a good showcase for emerging talents in animation. While one could fault The World According to Shorts for keeping the set so Euro-centric, the eclectic offerings on view make me hungry for other sets exploring similar stuff from Asia, Latin America, and even the U.S. of A. Recommended. 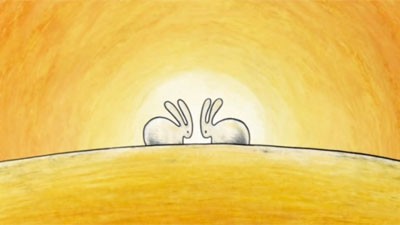