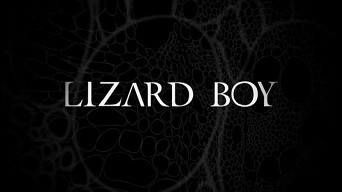 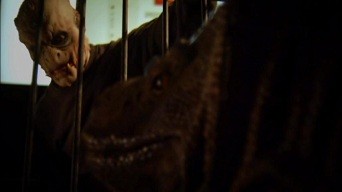 Here's the deal. I'm going to begin this review of Cinema Epoch's recent DVD release of Paul Della Pelle's Lizard Boy by speaking to 99% of the people who may happen upon this entry in DVD Talk's database of reviews and saving you a little time. I realize I'm giving it a "Rent It" suggestion - but if you have mainstream tastes, if you enjoy Hollywood blockbusters and cable television productions and nothing else, then this movie is not for you. Lizard Boy is terrible. Just move on. There's nothing to see here. Thank you and good night. 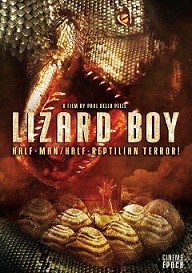 Still with me? Perhaps you're a glutton for punishment - or a fan of my writing. Neither is very likely (especially the latter), though, so I'll take a guess that you are a fan of B-movie mayhem. The package art for Lizard Boy certainly promises a SyFy Channel - style creature feature with its sinister albeit generic-looking reptilian creature, but as is often the case in home video genre productions, the artwork is deceptive. That creature is nowhere to be found here. Lizard Boy, instead, dwells in that nebulous dark water territory once referred to as "Grade Z." It exists several steps below SyFy cinematic fare and only a step above home movies. Think about it this way: Lizard Boy is the contemporary equivalent of The Blood Waters of Dr. Z (and God help you if you're familiar with that movie in any way unconnected with Mystery Science Theater 3000). Lizard Boy, at times, has the earnestness of a 1950's Ed Wood production, and at other times, a surreal goofy sense of humor reminiscent of Monty Python (pun intended - sorry, folks) on a really, really bad night. The offbeat film fan in me actually kind of sort of liked it.

This is the third paragraph now, so you must be at least curious about the film itself. The movie's script, authored by the director Pelle and Bruce Brown, follows a renowned geneticist named Dr. Gino Conti (Pete Punito) who, along with some geeky lab assistants, is creating "transgene" lizard hybrids for the government - or something like that. His personal life is a mess, though, as his lab assistant / fiancé wants a baby but he's shooting blanks, as the crass expression goes. She dumps him, and at this point, he decides to merge his DNA with that of the "transgene" lizards. And voila, the titular lizard boy is born. In three short years, under the secretive care of Dr. Conti, the boy is full-grown and begins terrorizing the community while Dad and his friends try to cover up and contain his son.

And boy is this movie bad. The Lizard Boy is a guy in a mask with a reptilian tail protruding from his pants. If you've seen the late-1950's dreck The Hideous Sun Demon, well, I can tell you that the Hideous Sun Demon looked about equally fake. These scientists are supposed to be bright, I guess, but their attempts to corral the Lizard Boy don't make a lot of sense. They include dressing him up for Mardi Gras, exposing him to ultimate fighting on cable television (really stupid if you're trying to keep him docile but helpful for the film's climax as Lizard Boy uses mixed martial arts in poorly-choreographed fights with government agents who see him as the next leap in weapons technology), and getting him high on marijuana.

Yes, this is tacky stuff - but what helps the film is its sense of humor. I wouldn't describe it as laugh (or chuckle) out loud funny, but there are some amusing bits thrown in throughout. For instance, one scene has the Lizard Boy at home with Dr. Conti and company watching a cable mixed martial arts fight when he rips the arm off of one of the men. The Dad, angered, tells his mutant son to go to his room as if he's broken a vase or something. I also liked the mean guy neighbor we meet a couple times who looks like an outcast from ZZ Top yet enjoys the television show Scrubs. Lizard Boy has a lot of odd little moments that are hard to describe adequately yet briefly in a review like this.

In any case, you've made it to the sixth - and final - paragraph of this review proper. You probably have a good enough sense of whether you are in the 1% of the population that might find Lizard Boy somehow appealing. If you are, then yeah, check it out as a rental - just keep in mind that you've been fairly warned. 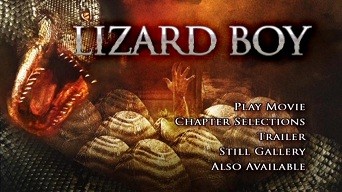 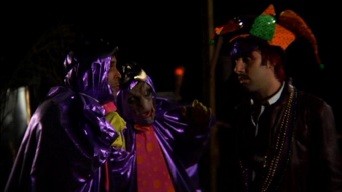 Cinema Epoch's release of Lizard Boy doesn't look great, but at least it's anamorphic widescreen with a 1.78:1 aspect ratio. Details are lacking and colors are muted. Hey, at least the video treatment is better than the last film I reviewed for this site: the bigger-budgeted Maneater.

The lone audio track is an English language Dolby Digital 2.0 stereo effort. Lizard Boy betrays its Grade Z production values here with an overall weak mix - though most of the dialogue is at least easily discernable. No subtitle options are available.

Paul Della Pelle's no-budget "Grade Z" production Lizard Boy can be safely avoided by 99% of mainstream filmgoers. However, if you're into fringe cinema, this offbeat tale of a geneticist and his lizard hybrid son offers enough surreal bad-movie charms to entertain for an hour and a half. Rent it, if you fall into the 1% who might actually dig this sort of thing.