In the four years since its widespread adoption, the National Hockey League's Winter Classic, held every New Year's Day, has discovered growing popularity and has served both as a jumping off point for the League's national coverage for the remainder of the regular season, but more importantly is an introduction for many to the sport of ice hockey. And while there are many who have been attracted to and inspired by the event, for many players it serves as a reaching back to their roots growing up. Many players fondly recall neighborhood lakes being frozen (or yards being flooded) during the winter months and playing the game with friends and family. With the 2011 installment, the League went all in on the exposure for the event, naming the Washington Capitals going to Pittsburgh to play the Penguins at Heinz Field, normally reserved for the National Football League's Steelers. Along with the perk of being rivals on ice, the added factor of the Capitals' Alexander Ovechkin and the Pens' Sidney Crosby being the puck equivalent of Bird vs. Magic in the second-highest profile event made the League salivate. To further saturate the coverage, HBO was enlisted to film and air a four-episode arc of shows leading up to (and just following) the game, titled Road to the Winter Classic, but more appropriately, under the 24/7 umbrella, to provide additional perspective to the game and players.

If any previous experience was any indication, the 24/7 show would do justice to the sport, after covering events both in auto racing for NASCAR and for championship fights in boxing. With Road to the Winter Classic, things are unchanged in terms of quality. Camera crews followed both teams around in the weeks leading up to the classic and had two distinct stories going on with both; the Capitals were floundering in the midst of an eight-game losing streak while the Penguins were in the middle of a twelve-game winning one. Capitals coach Bruce Boudreau was trying to find ways out of the hole (coincidentally, he was fired as coach recently after suffering a similar skid), meanwhile Pens coach Dan Bylsma was at the helm of a happy ship. Veterans were playing practical jokes on rookies on road trips while Bylsma managed the return of one of its core players due to injury (in forward Eric Staal). Through the course of the season, streaks end both bad and good, and the reactions to them, be it celebratory (like when the Caps win on the road in Ottawa) or dismissive (such as the Pens moving on) is included. Through the help of "fortunate" scheduling, the Pens came to Washington to play the Caps a week before the Winter Classic and on the heels of a convincing home win where the Caps' fans chanted "We Want Pittsburgh." The game was a thrilling battle where the Caps came back to tie and ultimately lose to the Pens 3-2 in a shootout, serving as a worthwhile opening act to the events nine days later. 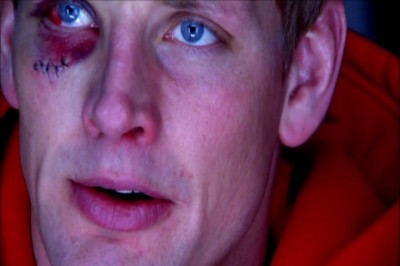 The Classic itself proved to have bits and pieces of red meat that served to further extend the rivalry. Whether it was a fight early on between Caps' defenseman John Erskine and the Pens' Mike Rupp, or an Ovechkin goal that was disallowed, Eric Fehr's goals in the second and third periods were the margin of victory in a 3-1 win. As it turned out, the game was remembered not for the spectacle, but for a hit that David Steckel laid on Sidney Crosby in the second period. As the HBO cameras would show, not only did the hit appear to be from incidental contact, Crosby was shaking off the aftereffects of the hit during the intermission and returned to the ice in the third.

There is a passage late in the fourth installment where narrator Liev Schreiber (Salt) mentions that "Hockey won't hold still for a portrait. To gain a glimpse inside, you join it in progress...just as players do. Jumping onto the ice for their shifts as the game swirls around them." While both the spectacle and stage of the Winter Classic are grand and impressive, one very quickly remembers that the game is just one of more than 80 others in the regular season. Routines before every game, whether they're in front of 65 at practice or 65,000 on a sheet of ice in a football stadium, are maintained because if nothing else, the creatures of habit that hockey players are, do what they can to keep the good mojo working (witness Crosby's athletic supporter in the picture below, one he's had since he was a child).

Continuing with the Schreiber quote: "...On that ice the action moves at high speeds. The punishment doled out can be staggering." Both teams have clear firsthand testaments to this, whether it's Penguins defenseman Ben Lovejoy, who took a puck to the side of the head during a game. The swelling in his face was amplified during the flight to Washington, to the point where it had become Merrick-esque. After a fight during their losing streak, Caps forward Matt Hendricks eye inhabited the Caps' red, white and blue team colors, while he discusses the necessity of fighting for him to retain a job at the NHL level. As one who's followed hockey for a while and being aware of some of the illnesses/injuries players that incurred, seeing them being discussed by the players as they transpire proves to be fascinating. 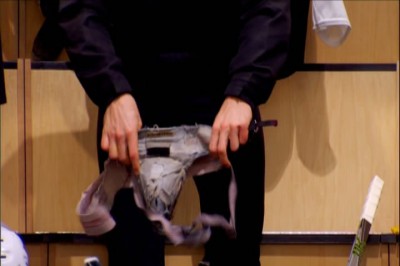 And a little more: "...And the very best in the world form bands of brothers, as authentic as any in sports." Whether it is on the same side or against one another, the experience of playing in the National Hockey League is a unique one. During a fight between Ovechkin and an opposing player during the losing streak, they both end it by saying the same thing: "Good job buddy." There may be true hatred among players, but the mutual respect outweighs it. And they certainly don't keep things serious, aside from the practical jokes played on players, the talent certainly plays to the rivalry as well (with the Pens' Brent Johnson playing a song from Rocky IV to both provoke and entertain the rivalry stereotypes). Additionally, the playing of Maxine Nightingale's "Right Back Where We Started From" while the Pens are on a bus to travel to the arena is a fun, thoughtful nod to Slap Shot, known as the be-all, end-all of hockey depictions.

Along with the unprecedented access that the league allows 24/7, be it with the officials and players interacting on-ice or a coach's unleashing of profanity off of it, Road to the Winter Classic is a mix of humor, drama and suspense that even for those closest to the ordeal will enjoy. For those parties part of the Winter Classic, it was just another game, there just so happened to be cameras there, which might make the audacity of the game all the more special to those who skated for it before and will again.


The show's four hour-long episodes are presented on DVD in 1.78:1 anamorphic widescreen consistent with their original broadcast format. Regardless of what sport the show focuses on, the visuals have always been excellent and this is no different for Road to the Winter Classic. Using a mix of handheld footage and fixed positions for interviews (along with fairly hot lights in the case of the latter), the image looks natural and free of edge enhancement or other post-image processing. The show captures a new aspect that others may not be privy to and the image conveys that pseudo-grittiness effectively through the disc.


Dolby two-channel stereo for the ears, and it sounds as clear as can be. Interviews sound strong and consistent in the front channels and the soundstage is broader than I was expecting, and there even may have been a hint of low-end activity to it. Straightforward listening material.


Nada. Considering the film crews were shooting approximately four to six weeks before the event, the lack of additional footage (or even the interviews conducted on the HBO website) is a huge missed opportunity.

Speaking of missed opportunity, it should be noted that some of the music from the show's original airings has been changed for its video release. The show used numerous songs from Many of the changes are within the underlying score, and some of the bigger tracks have been retained, but one of the more noticeable errors I found was at the beginning of Episode 2 during a trip the Penguins made to Philadelphia, when Boston's "Long Time" was replaced by an instrumental track. I appreciate the issue of music rights like anyone else and kind of dreaded this release would have to do something like this, but it doesn't mean I have to like it.


As a Capitals season ticket holder, I was at the Winter Classic, along with some of the moments in the show (and if you look real close, you can spot me in a couple of areas). As much fun as I had both at the event and the run-up to it, Road to the Winter Classic provides an informative aspect for those familiar to the event and sport of hockey, not to mention serving as an outstanding introduction to the sport itself. With the upcoming Winter Classic between the New York Rangers and Philadelphia Flyers (and accompanying new season of 24/7) we can look forward to improved episode storytelling. As it stands, this is pretty damned tight as it is and assuming you can stomach the changed soundtrack is well worth the time.