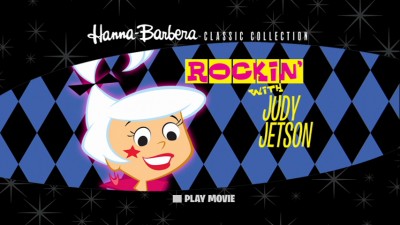 The Jetsons is one of the greatest of the Hanna-Barbera cartoon series. It was futuristic in many ways (and less so in others) but what it almost always had was a vibrant and lovable sense of optimism about the future that made it one of the most entertaining cartoons ever made and a classic that has developed new fans over the decades following its premiere in 1962. The series enjoyed a revival cartoon in the 1980's and along with the new episodes sprang a few spin-offs. Rockin' with Judy Jetson was one of those spin-offs; a made-for television movie that followed the journey of rock-fan teenager Judy, George and Jane Jetsons oldest child.

The story and script were somewhat basic and not as well developed as expected. The premise seemed more appropriate for an episode of the show (or an extended episode). With a run-time of 92 minutes it can seem as though the story just wasn't developed as much as it perhaps could have been for a feature-length film. The story begins with Judy Jetson and her best friends attending a rock concert from the Sky Rocker (one of the most popular rock musicians in the galaxy). A contest was held where fans could submit their own song and one winner would hear it sung by Sky Rocker and be credited as the writer. Judy submitted her own song (the film tells us that Judy has written songs in school for quite some time prior to submitting a song to the contest). The concert begins. Judy waits. 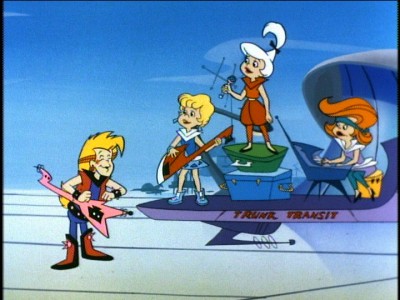 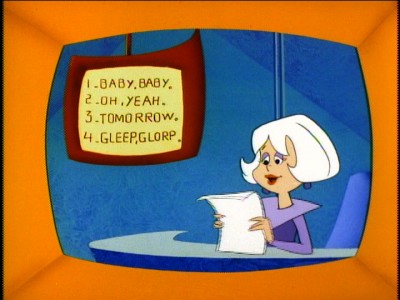 The winner of the contest... Judy Jetson! The only problem is the lyrics aren't her own and belong to someone else (i.e. it was actually a different song that won - not the one she had written).  The song lyrics were actually written from an alien witch who doesn't like any rock music and was intending the message to be sent to another alien for some diabolical plan of some kind. Judy wants to go see Sky Rocker after the contest and let him know about the song mix-up - only he's now missing! And Judy is sky-rocket-ing to fame as the writer of the song she didn't write! Can Judy find Sky Rocker, stop the alien who hates music, and bring her own song to music stardom?

The animation in this made-for-television feature film is surprisingly not as high in quality as the 80's cartoon was. It isn't entirely without merit - the character designs, backgrounds, and other small touches are still distinctively that of The Jetsons and are a real delight. Television budgets and time constraints were likely major factors affecting this lengthy production; the main cause of the animation not holding up quite as well as expected.  While it is important to note these elements of production it is also important that the animation isn't of the same caliber and it can be a detractor from the experience.

The voice-acting remains consistently high in quality and doesn't disappoint for any of the characters. The direction allows for the feature to have a fairly good pace. There are also some musical songs used throughout the film and these moments are pretty entertaining too. The best thing about Rockin' With Judy Jetson is that it can still be enjoyable for fans even though the animation isn't representative of the best work from Hanna-Barbera and the storyline could have used some tweaking for additional sub-plots or character moments.

Rockin' With Judy Jetson is not in the same league as the original Jetsons cartoon or even necessarily the 80's produced episodes. While it has a fair share of charming moments it just isn't as well made overall. Yet it should still manage to appeal to fans of The Jetsons and would make a worthwhile production to see for those fans in particular. Rockin' With Judy Jetson is a good effort overall (despite some imperfections). 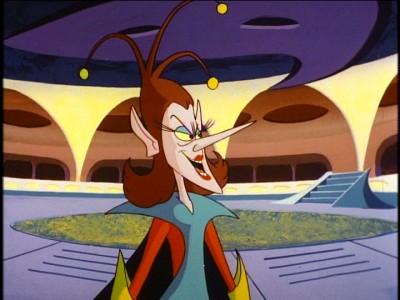 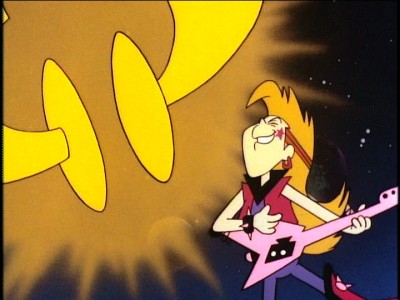 The picture quality on this release is disappointing as it appears no effort went into restoring the cartoon feature. The film is presented in its original television broadcast aspect ratio of 1.33:1 (full frame). The contrast isn't consistent, there are specks of dust and dirt on the print, and the colors appear somewhat faded. The compression is decent so it doesn't look terrible in that way but it isn't sparkly in the slightest and definitely shows that the source was in somewhat poor condition.

There are no extras on this M.O.D. (Made on Demand) release. The release does contain full color artwork and disc art on the DVD. 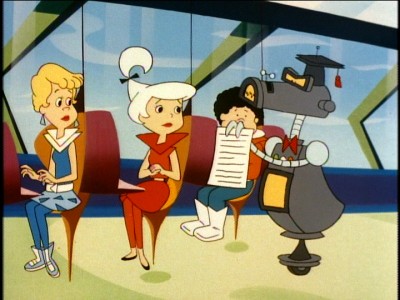 Rockin' With Judy Jetson isn't on par with the best episodes of The Jetsons but it does have some entertaining moments and should still be worth the time of any fan of the classic show by Hanna-Barbera. The DVD PQ/AQ are somewhat disappointing, and the lack of extras isn't that exciting either. This is still a release worth picking up (at a reasonable price) to include with the other Jetsons DVD releases. Recommended.