Secrets In The Walls 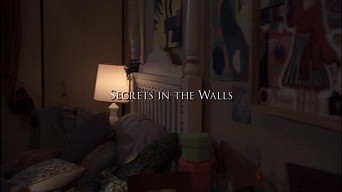 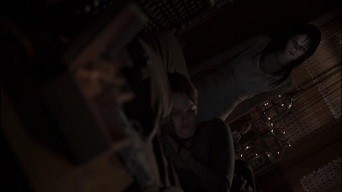 This week, RHI Entertainment, as it is wont to do, released another made-for-television movie on DVD. Titled Secrets in the Walls, the disc, upon first glance at its cover art, appears to be a recycled SyFy Channel movie (fare that RHI tends to release on home video with great regularity). However, this supernatural 90-minute thriller (clearly timed to allow for roughly 30 minutes of commercials in a 2-hour block of cable programming) falls more in line with the Hallmark or Lifetime Channel, given its emphasis on an oh-so-independent single career mother raising two girls and chatting away with her support network (her caring younger brother and her caring co-worker, etc.). Blah!

Needless to say, I wasn't expecting much going into this film, and the contrived opening twenty minutes promised, well, not much anyway. However, once the ghostly horror hokum started up, PG and advertiser-friendly in nature though it was, the story became interesting. The last two acts of Secrets in the Walls improve upon the first, and this television production as a whole proved to be better than it really had any right to be. 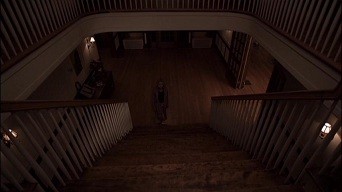 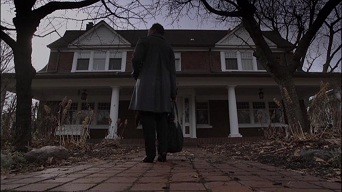 Secrets in the Walls features Jeri Ryan as the lead. Star Trek fans might remember Ryan as the buxom Seven-of-Nine, brought onto Voyager more than a decade ago in a transparent attempt to punch up that show's flagging appeal. I don't think I've seen Ryan since then, though her IMDb profile suggests she has stayed very busy on television. She's reliably good here as a single mother named Rachel starting a new job at a hospital. She befriends a nurse (Marianne Jean-Baptiste) who just so happens to also be a spiritualist, convenient considering what is about to unfold. Rachel is raising two daughters after a divorce; the older one, Lizzie, is a typical high school junior, while the younger one, Molly (Peyton List - clearly channeling Chloe Moretz) is a precocious girl with psychic abilities.

To make a long summary short, Rachel moves herself, Lizzie, and Molly into an old home she got dirt cheap. Strange goings-on occur soon afterward with a ghostly young woman showing up in mirrors while she haunts the rooms. Molly is in tune with the specter before anyone else (a la Chloe Moretz's character in Wicked Little Things, which had the very same family dynamic at play), but soon all three are affected.

Secrets in the Walls's plot borrows heavily from standard ghost movie conventions. Here were a couple more I recognized: Molly decides to take the spooky large empty basement room as her own as the teen protagonist does in A Haunting in Connecticut. Rachel's brother, in one of the most insipid scenes of the movie, helps the family break down a wall with sledgehammers (hints of A Stir of Echoes) to the tune of a generic alt-rock empowerment song. And when Rachel's spiritualist friend arrives at the house, bag in hand, to sort out the ghostly goings-on, well, let's just mention The Exorcist and The Amityville Horror and leave it at that.

Despite all this, I ended up actually liking the movie. For one thing, Christopher Leitch's direction is surprisingly good for a hastily-produced television production. Long establishing scenes with characters walking toward or away from the camera are well-shot and reminiscent of scenes of Laurie and her babysitting friends walking around the suburbs in John Carpenter's Halloween. I also appreciated the symmetry of several shots, which reminded me of Robert Angelo Masciantonio's Neighbor (an otherwise forgettable movie, but it did have similar composed shots that were memorable). And while I picked on the obvious "inspirations" for Secrets in the Walls above, it has to be stated that William Penick and Chris Sey's screenplay takes an unexpected twist about an hour in - I won't spoil it here - that surprised.

Ultimately, Secrets in the Walls isn't explicit enough per se for the horror hounds out there. However, after the first 20 insipid minutes of character establishment are over, this film offers some moody television-friendly scares and engaging plot twists. I'll go with a mild recommendation. 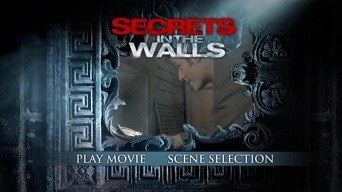 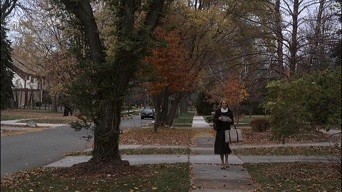 Vivendi Entertainment gives Secrets in the Walls an anamorphic widescreen presentation that it claims "preserve[s] the aspect ratio of its original television exhibition." Colors are muted here, and the image seems soft at times - though both may be deliberate artistic choices given the supernatural theme of the movie itself.

The lone audio track is an English language Dolby Digital 5.1 affair. Dialogue is always clear, and the overall mix is satisfying albeit not particularly dynamic. No subtitle options are available.

Trailers for Seven Deadly Sins and Behemoth precede the main menu - and that's it for extras.

Secrets in the Walls could have been a dreary made-for-television movie haunting the October schedules of either Lifetime or Hallmark (and perhaps it was or is, I don't know offhand), but several things helped elevate it after a slow first act, including Christopher Leitch's competent direction and Jeri Ryan's performance. The plot may be a mish-mash of horror movie clichés, but the PG scares, when they arrive, are halfway decent, and the script does hinge upon a surprise twist for its third act. This was more engaging than I thought it would be - and the disc comes recommended.