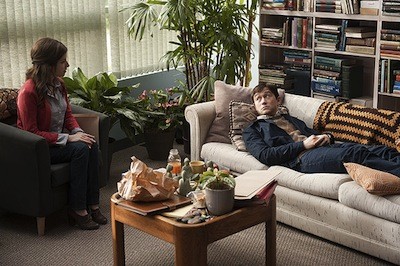 When Adam is told he has cancer, his natural response is to be shocked. As he says, he's 27, doesn't smoke, doesn't drink, and he recycles. It's the kind of joke that we will come to expect from him throughout 50/50, exemplifying his grin-and-bear-it approach to his illness. He accepts that inexplicable bad things happens to demonstrably good people, and it's much less important why they happen, but how the stricken person deals with what they've been given.

Adam is played by Inception's Joseph Gordon-Levitt, a master of the quiet reaction. He's a perfect choice, because what makes Adam interesting as a character is that prior to this diagnosis, he's faced all obstacles with the same clenched jaw. Despite his regular insistence that he can take care of himself--he protests against aid from his comically worried mother (the great Anjelica Huston), his emotionally cagey girlfriend (Bryce Dallas Howard), and his good-time best friend (Seth Rogen)--he's never really had to take care of much of anything. Adam has never even learned how to drive. His cancer is a rare genetic anomaly, and his odds of surviving, as the title would suggest, are 50/50. Adam has to face the coming months as a person who may not get many more. His way of coping is not to pursue some bucket list. For him, coping is just learning to cope.

To deal with the cancer, Adam will get chemotherapy. At his sessions, he meets a couple of cantankerous older men who become his friends. They are played with humor and pathos by Philip Baker Hall (Hard Eight) and Matt Frewer (formerly Max Headroom), and they represent one side of life's journey. Adam also has to go to therapy, and his assigned analyst is a 24-year-old student doctor, Katie (Anna Kendrick, Up in the Air). She is the other end of that journey, youth and inexperience contrasted with age and understanding. Adam resists these things at first, but eventually he opens himself up to the experience. Opening up, not being the steady rudder cutting an even path through existence, is a big part of Adam's life lesson. As a cold description, I admit, 50/50 sounds like movie-of-the-week territory, the kind of thing that could be overly mawkish and peddle in cheap homilies. Writer Will Reiser and director Jonathan Levine (The Wackness) don't indulge in such easy outs. There is great emotion in 50/50, don't get me wrong, but the response that is drawn from the audience is derived from things that actually happen. Excepting his occasional reliance on heavy-handed music cues, Levine never tells us how we are supposed to react, he just let's us react. I'll admit, 50/50 jerked more than a few tears out of my eyes, particularly as Adam quite naturally, and even nonchalantly, discovers that he has not been going through his illness alone, that friends and family have been with him more than he thinks. 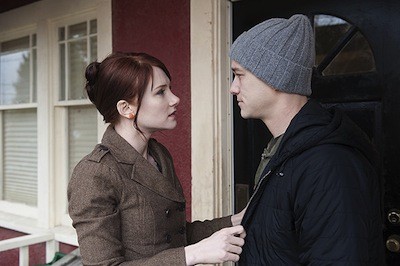 Even more surprising than 50/50's deft handling of the serious side of this difficult subject is the fact that it's really damn funny. Reiser has found unsuspected comedy in cancer. Some of the jokes come from Gordon-Levitt's portrayal of Adam as appropriately mystified by the absurdity of his situation, allowing us to laugh alongside him. In some ways, the film can be weirdly judgmental--most of the people around Adam seemingly can't do anything right, and the film has to sort between whom he treating genuinely unfair (his mother) and to whom it only initially seems like it (the girlfriend). The fumbling of the young therapist, and the bond that grows out of it, starts out silly, but eventually turns pleasurably sweet.

Broader laughs come from Rogen's Kyle. The foul-mouthed best friend talking about blow jobs and then even more blow jobs is not necessarily an unexpected role for the comedian, but it's reassuring to see he's still a good fit in this kind of thing, particularly after his experiments with the boundaries of the Seth Rogen persona in stuff like The Green Hornet. The fact that Rogen is also a producer on 50/50 reaffirms that he knows good material when he sees it. Rogen and Gordon-Levitt make a great team, the archetypical buffoon and straight man. As with all the important characters in 50/50, Kyle goes through his own changes. This adds further emotional weight to 50/50, Adam's evolution inspires growth in everyone.

50/50 is a film that easily could have left audiences worn out and depressed; instead, 50/50 is a movie that sends viewers out of the theatre feeling good. Not in any cheap way, either, but a good feeling that is come by honestly, earned through struggles, mistakes, and the accumulation of small victories. It's not an easily classifiable movie, and that may make it a difficult one to sell (the poster is hideous and wrong), but it's one that as many as people as possible should see. 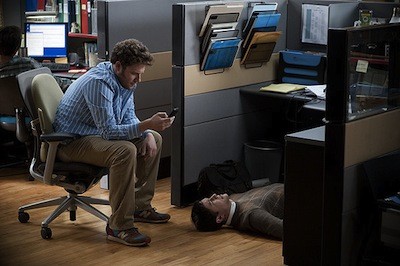