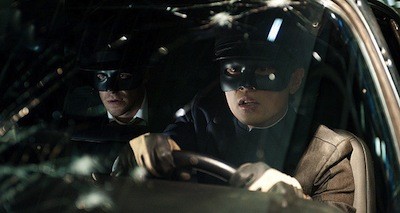 The prospect of a Michel Gondry superhero movie starring Seth Rogen has raised eyebrows since day one, and your reaction to Green Hornet is dependant on which side of the fence your expectations falls. If you think that pairing seems like the most ridiculous recipe for disaster you've ever heard, good news: it's actually not all that bad. If you are excited by the possibilities of an inventive visionary making a comedic comic book movie in 3D, then bad news: it's actually not all that good.

Green Hornet is a crime-fighting vigilante whose origins date back to radio serials created by George W. Trendle. Trendle also created the Lone Ranger, and the Hornet was kind of an attempt to bring that character into the 1930s. Mix in a little pulp fiction and a little Batman, and you've got the basic idea. The Robin to Green Hornet's Batman was Kato, a martial arts expert most famously played by Bruce Lee in the 1960s television show. The Green Hornet's secret identity is Britt Reid, a crusading newspaper publisher who fights crime and corruption on the printed page--a fight he takes to the streets when he dons his mask and trademark coat and hat.

This new Green Hornet keeps the same basic premise, but the script, penned by Rogen and his regular writting partner Evan Goldberg (Superbad), takes your average superhero story and tweaks it to fit the Rogen persona. Their Britt is a no-account screw-up whose overbearing father (Tom Wilkinson) dies from a bumblebee sting, leaving his son with a fortune, a publishing empire, and no sense of responsibility. Britt bonds with dad's mechanic, Kato (Initial D's Jay Chou), who also thought old man Reid was a jerk. During a covert grave desecration, they stumble into an attempted rape/mugging, and they beat up the bad guys. Well, Kato does most of the beating. It's a running gag of the movie: Kato is awesome, and Green Hornet is pretty much useless. The idea is that he will eventually learn to be a better man, but he's got to endure some fumbles and a few nut punches before that is going to happen.

The plan these two boobs hatch is to pose as criminals, and under the guise of taking over criminal territory, they will actually be crippling the Los Angeles underworld. This puts them in direct conflict with the local big bad, a diminutive motormouth with the unfortunate name of Chudnofsky. Austrian actor Christoph Waltz trades on his success from Inglourious Basterds to take on this nothing role. He does his best to give Chudnofsky villainous sizzle, but like so many things in this movie, the character arc never goes far enough. Chudnofsky decides he will borrow from the Hornet's playbook and adopt a flamboyant image. He renames himself Bloodnofsky, which you'd think would give him license to go all aggro and violent all over everything and everyone. Instead, he puts on some red leather and starts staying stupid thing. Again, this is right in line with the rest of the movie, which sheds its intelligence as it goes. 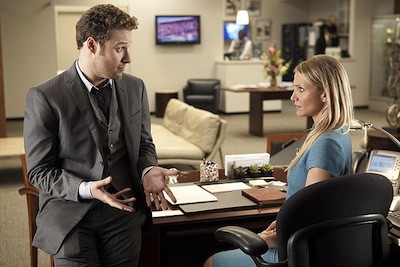 I wouldn't call the final reel of Green Hornet out-and-out bad, but it lacks vigor or originality. While the first half of the movie takes mocking jabs at the standard masked hero origin, the second half surrenders to the dumb mechanics of a fairly rudimentary plot outline. It's a shame because there are some truly brilliant moments in the film. These are the points when you can see Gondry's fingerprints on the screen, when the visual wizard responsible for Eternal Sunshine of the Spotless Mind and countless music videos emerges from behind the clichés and gives us something truly memorable. The first fight scene at the graveyard playfully extends the 3D visuals in a way that is fun and clever, only for the director to drop the style immediately, never to bring it back. There is also an astonishing use of split-screens and picture-within-picture that uses 3D to reinvigorate the art of montage. It's another neat device used once and then abandoned.

For a lot of the movie, the 3D is a superfluous element, noticeable for its absence rather than exciting us with its presence. That may be Green Hornet's biggest problem, even moreso than the predictable story: there is never enough of anything that makes it good. If this was going to be a Rogen/Goldberg comedy, then the jokes should have come faster. If it was going to be an adrenaline-pumping action picture, then there needed to be more fight scenes. If it was going to be a mind-blowing Michel Gondry visual freak-out, then every scene needed to leap right off the screen and knock our heads back. Instead, we get touches of things that make us yearn for the movie lurking just out of frame.

I hate to say this, because I generally like Seth Rogen, but Green Hornet really needed a different leading man. His ineptitude grates after awhile, and in the last act, it's not that I didn't buy his almost kind-of sorta transformation into a hero, it's that I just didn't care to watch him anymore. The joke is that Kato is really the cool one, but it's not really a joke--Jay Chou was by far the more interesting performer. He's funny and charming, and he needed a sparring partner that was maybe a little more frat boy and (forgive me) a little less fat boy. At least he is given enough to distinguish himself as the sidekick; Cameron Diaz has nothing to do filling the female quota. She's wasting her time even more than Christoph Waltz.

When you tally the score, I laughed a fair amount of the time, but not enough. I ooohed and ahhed at the effects and cringed at some of the violence, but the moments came too few and too far between. It would have made for decent entertainment on my television set, but two hours in a movie theatre would not be well spent with Green Hornet. It's a near-miss, an almost-there, a close-but-not-quite, and for all the talent involved, that's just not good enough. 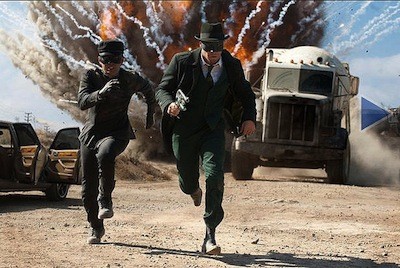